When Secrecy Allows Atrocity: UNPO Launches Report on International Day of the Disappeared 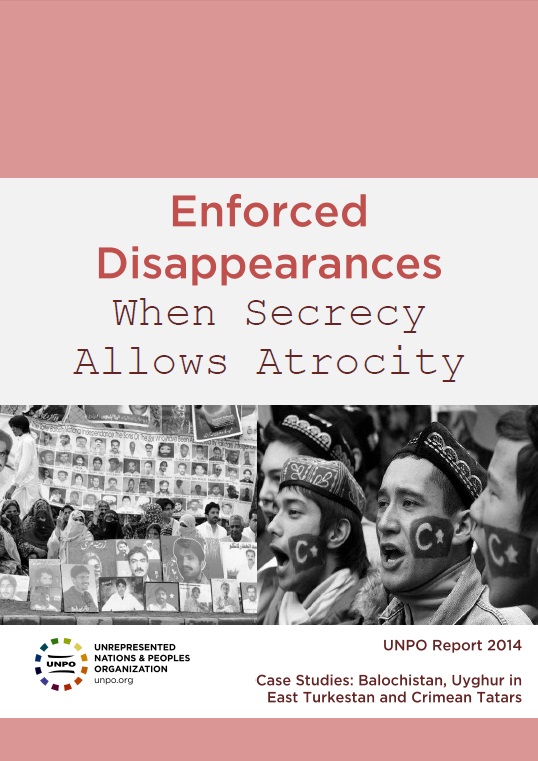 On the 30 August 2014, the Unrepresented Nations and Peoples Organization observed the International Day of the Disappeared in line with its commitment to fiercely condemn and combat the act of enforced disappearances, which constitutes a human rights violation that affects the person who is disappeared, as well as their family, friends and community. Around the world, thousands of individuals fall victim to kidnappings, arbitrary detentions and extra-judicial killings. They vanish in complete serecy leaving behind no traces and spreading paralysing panic among the targeted, vulnerable ethnic minority groups.

The Members of UNPO are no strangers to the reality of enforced disappearances. Indigenous peoples and minority groups are disproportionately affected by enfroced disappearances in their struggles to secure their dignity, freedoms and human rights. UNPO has decided to create and provide the international community and the wider public with a tool to intervene in order to counter the impunity of this practice, particularly when committed by criminal governments attempting to supress legitimate, peaceful and democratic initiatives of dissent. To this end, UNPO is launching the report “Enforced Disappearances: When Secrecy Allows Atrocity”.

The Baloch, both in Iran and Pakistan, and the Uyghurs in China have been targeted in an attempt to weaken the resilience of their community. Despite the fact that enforced disappearances have taken a toll on indigenous populations and ethnic peoples around the world, they continue to strive and struggle for their rights, undeterred by the political and physical limits imposed by States and Governments on their non-violent actions.

Enforced disappearances have widespread consequences; while in secret detention, the disappeared are likely subjected to torture; physical and psychological abuse. The concealment of their whereabouts or detention places the victim outside the protection of the law, meaning that the individual cannot benefit from legal procedural guarantees. The dehumanizing and ruthless treatment of victims instils fear in detainees, while the family and community of the individual undergoes extensive trauma not knowing the whereabouts, health and condition of the disappeared. As family members and friends spend years searching for the disappeared, they are oftentimes confronted with intimidation and coercion from State authorities for their actions, as evidence by several Uyghur testimonies.

The UNPO remains committed to the fight towards the eradication of enforced disappearances, but remains alarmed that in the case of Asia, there is still no regional, legal or procedural mechanisms to protect and promote human rights. Since international and domestic political measures for combating enforced disappearances, ending impunity and providing compensation for victims are (almost) absent in the case of China, Pakistan and Iran, one must also consider their positioning within the international system. Considering that since the creation of the United Nations Working Group on Enforced or Involuntary Disappearances in 1980, the group has received more than 55,000 cases of enforced disappearances from 84 States, but only 43 States have thus far ratified the principal legal document addressing the issue – the International Convention for the Protection of All Persons from Enforced Disappearance. Many EU Member States have yet to sign and ratify the Convention. This must change, and this report is a first step in understanding why this is urgently needed.

There is some space for optimism; international human rights regimes can be strengthened in places where advocacy networks, NGOs, CSOs operate, because they call attention to abuses, pressure the State, spread information, and generae public support. This is why UNPO will continue to provide an opportunity to raise awareness against the criminal strategy of deliberate, systematic and widespread silencing of peaceful opposition.