Model UNPO is a role-play and debating activity that directly engages young people with issues facing some of the world’s most marginalised communities. It offers an opportunity for young people to develop the tools and confidence to become advocates for their community through practising public speaking and debating skills.

The state has come to dominate understandings of geopolitics, and state leaders dominate international headlines. However, those who are most acutely affected by conflict, human rights abuses, and environmental injustices are often not represented by state interests. In many cases they seek to represent themselves on the international stage as stateless nations (e.g. Tibet), as indigenous communities (e.g. Crimean Tatars), as minorities (e.g. Ahwazi community in Iran), or as de facto states (e.g. Somaliland).

‘Model UNPO’ is loosely based on ‘Model United Nations’ simulations, but instead of young people being assigned roles as representatives of nation-states and enacting UN meetings, they are designated roles as representatives of stateless nations, indigenous peoples, and minority communities. Young people research their assigned non-state actor and then simulate a debate of the UNPO’s General Assembly based on pre-established rules of procedure. The focus of the debate could be issues around minority rights, human rights, conflict resolution, language rights, youth issues, gender discrimination, and environmental justice.

Inspired by an initiative developed by Brazilian students we have been working with our partners at the University of Oxford to develop Model UNPO materials for youth groups and for schools. To date, Professor Fiona McConnell (Professor of Political Geogrpahy at the University of Oxford) and Dr. Liam Saddington (Teaching Associate in Huma Geography from the University of Cambridge) have run Model UNPO activities at three secondary schools and six primary schools in the UK. Materials tailored for 16-18 year old school students are available here: https://www.rgs.org/schools/teaching-resources/debating-global-governance-model-unpo-role-play/ Resources for 9-11 year old school students focused on the question ‘What is a country?’ are currently being developed.

Model UNPO has also been run at UNPO and Council of Europe Study Sessions with youth groups. 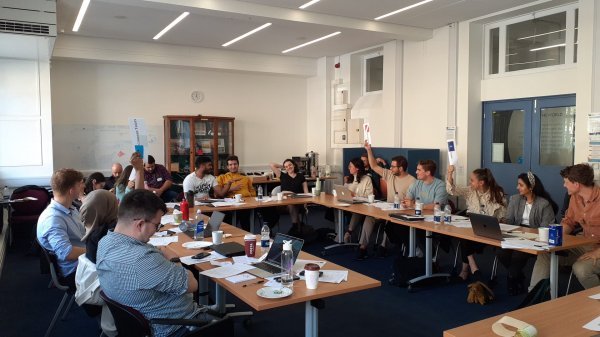 Model UNPO enables youth groups to run role-play debating exercises on issues that directly affect their communities. These could include minority rights, human rights, conflict resolution, language rights, youth issues, gender discrimination, and environmental justice. Examples of themes could be taken from session themes of the UN Forum on Minority Issues, or the UN Permanent Forum on Indigenous Issues. The chosen theme should be reflected in the resolution and/or guidance given to participants for preparing initial statements and draft operational clauses. The theme might also inform which UNPO members are chosen to be present at the debate.