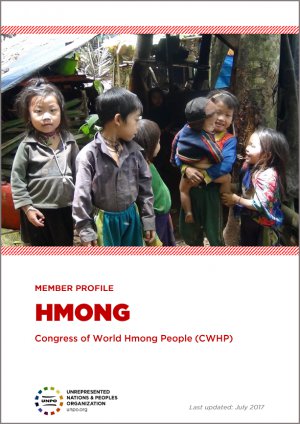 The Hmong are an indigenous group originally from the mountainous regions of southern China, Viet Nam, Laos, Myanmar and Thailand. They distinguish themselves from the Laotian population because of their ethnicity, written and spoken language, culture and religion. According to governme 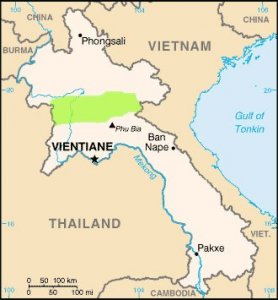 According to the 2009 national census, the majority of the Hmong population in Laos is situated in the mountainous northern area of Laos. As for the Hmong ChaoFa – namely those who are not Buddhist nor Christian but who believe in the Mother of Writing, Shonglue, who revealed the written scripts and Shonglueism to the Hmong in 1959 –, the provinces they inhabit include: Houaphanh, Xieng Khouang, Sayaboury and the city of Luang Prebang along the Mekong River. Some mountain peaks such as Phou Bia reach above 2,800 metres in the region. Dense forests also cover the Northern and Eastern areas. This Hmong territory borders Viet Nam in the East, China in the North, Myanmar in the Northwest and Thailand in the West.

For decades the Government of Laos has deployed a campaign of repression and serious human rights violations against its population. The country, however, has largely managed to escape international media scrutiny for its human rights abuses. Due to the tight control of LPRP, individuals and civil society organizations are promptly stamped out. Under the 1991 Constitution, the Lao People’s Revolutionary Party was designated as the one and only legal political party in the country. Accordingly, the rule of law is undermined by political interference and endemic corruption. Moreover, widespread restrictions exist with the freedoms of expression and association, causing the imprisonment of political opponents, arbitrary arrests, enforced disappearances (including of children), abject poverty, inequalities and a lack of access to health and education for part of the population. These restrictions are further accompanied by severe limits on cultural and religious freedoms, especially for ethnic minorities and indigenous peoples such as the Hmong.

Despite the apparent economic growth of the country, a top-down economic policy has led  the Hmong community to face extreme poverty and serious marginalization. As noted by the UN special rapporteur on Extreme Poverty and Human Rights during his visit to Lao in 2019, there exists persistent structural barriers that prevent the full realization of human rights by people in poverty, particular by ethnic minorities.

Under “Turning Land into Capital” policy, the Laotian government has granted large companies (including agreements with foreign investment) the right to build industrial plantations, hydro-power projects, mines and other extractive industries on large tracts of land. The opacity of the Lao government ambitious projects and the lack of accountability is highly damaging the citizens and in particular the most vulnerable. Many development and infrastructural projects in Laos have resulted, across Lao, in mass displacements, illegal land grabs, and land grievances. Hmong communities have been displaced having devastating consequences for the rural communities leading to a direct loss of livelihood, food and water insecurity and often inadequate or no compensation for land that was lost.

In August 2020, the Special Procedures of the UN Human Rights Council expressed serious concerns about the situation of the ChaoFa Hmong  addressing the allegations of state-sponsored persecution of the Hmong people through a public allegation letter. The letter, signed by ten Special Rapporteurs, was sent to the goverment of Lao PDR. To date, the goverment has not sent an official reply to the allegation letter.

The Congress of World Hmong People (CWHP) has been a Member of UNPO since 2007. It represents the ChaoFa Federated State internationally.

Given the aforementioned violations of the rights of the Hmong, UNPO strongly condemns the military violence against the ChoaFa indigenous civilians in the Special Zone of Xaisomboun as well as the intimidation, harassment and persecution of human rights defenders, journalists, and members of minority communities through arbitrary arrests and enforced disappearances. Moreover, UNPO believes that developing a legal framework is necessary to protect local inhabitants from land grabbing and forced relocation, as these practices significantly affect the economic activities of Hmong people, depriving them from their own means of subsistence. UNPO also supports the Hmongs’ demand for independent international mediation to allow a fair dialogue between the Lao government and the people.

Even if the Hmong define themselves as indigenous people and distinguish themselves from the rest of the Laotian population, the Laotian government refuses to acknowledge their indigenous status, leaving them without access to relevant legal protections which are critical for indigenous peoples. This problem is exacerbated by the  additional restrictions on access to their land by recent economic policies that directly affects their livelihood and identity.

Many Hmong families live in fear of arbitrary arrest and torture while experiencing abject poverty. For those who have fled the Laotian jungle, persecution is a daily reality with reports indicating the disproportionate use of force by the LPA army to displace them. The numbers of the people who have been able to survive the ongoing attacks and the extreme humanitarian conditions have been alarmingly reduced.

In addition to historical reasons linked to the Vietnam war, and fostered by economic and development purposes and in particular, the exploitation of the richness on natural resources of the Hmong land on the Xaysomboun province and the Phou bia area, the government’s military campaign led by the Lao People’s Army (LPA) has intensified significantly during the last decades. Due to large-scale extractive industries and illegal wood looging many Hmong communities have been forcibly relocated from their lands or face extensive environmental problems. The construction of hydroelectric dams along the Nam Ngum River, gold and silver mining, as well as illegal wood logging, have seriously affected the environment in the area. Currently, these activities have reached record numbers, based on a rhetoric of economic independence and rural development to sustain the country’s poverty reduction propaganda. These developments continue to cause environmental hazards and erosion, the reduction of wildlife and fisheries, the disappearance of the historical wilderness and above all, the destruction of nature. Ironically, the Hmong are often accused of causing the country’s deforestation problem and thus forced to relocate.

Many Hmong families who, unable to continue living under the ongoing persecution and severe starvation have surrendered to the authorities and being relocated into camps or highly surveilled villages. Others have fled Laos and taken refuge in neighboring countries, have been forcibly repatriated to Lao as  Viet Nam and Thailand have standing collaboration efforts with the Laotian government. Currently, Hmong from Laos remain unable to seek asylum and obtain refugee status in neighboring countries.

For decades, the area has been hermetically closed to visitors and the government has denied any official request to visit the area or any kind of humanitarian or medical assistance. Journalist in 2001, 2003, 2004, 2008, 2016, and late 2019 have unofficially visited the area and reported on the disproportionate use of force and human rights abuses against the people in the region. Also, the CWHP jointly with the UNPO has been able to maintain a timeline of the attacks from 2016 until today and to compile some evidences of the attacks and human rights abuses against the Hmong in the jungle and the people who have been relocated in highly survilled villages.

In January 2021, the Phou Bia Mountain was announced as a "sustainable developtment tourism site" with an estimated hundreds of millions of dollars in development funding”. The Laotian army submitted a corresponding report to the Lao Eleventh Party Congress “that authorities have worked hard to monitor and suppress occasional flareups of unrest.”

On March 2021, the report “Atrocity Crimes Risk Assessment series of Lao People’s Democratic Republic’s”  explicitly underlines that, “the treatment of the ethnic Hmong tribe by the government of Lao PDR (...) is of particular concern.”

On 14 March 2021, a few days after the report's publication, authorities in Xaisomboun (Saysombun in Lao) province issued a decree  restricting access to the Phou Bia jungle to all civilians and stating that the access to the area is since then, permitted only to military personnel, with all roads being closed.