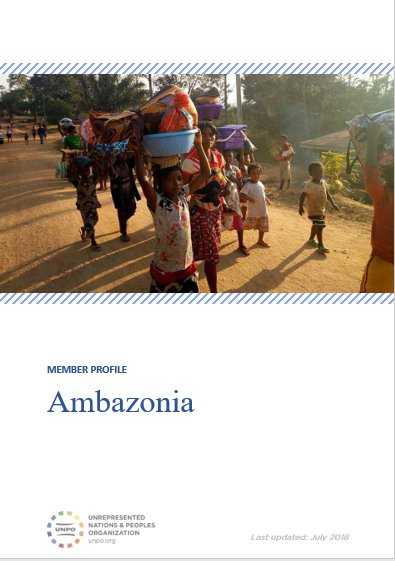 Ambazonia is the former United Nations Trust Territory of the Southern Cameroons. Ambazonia is currently under military and administrative subjugation by Cameroun, which governs it as the Southwest and Northwest Regions of Cameroun. The name “Ambazonia” is derived from the location of this territory in the Ambas Bay area within the Gulf of Guinea. The official language of Ambazonia is English, in contrast to the largely French-speaking Yaoundé-based Cameroun administration

Ambazonia perceives itself as a victim of the illegal transfer of colonial authority over Ambazonia by Britain to Cameroun in a decolonisation process under the supervision of the United Nations. This is the consequence of the United Nation’s attempt in 1961 to decolonise the Ambazonian territory by attaching it to French Cameroun. Cameroun’s government has engaged in continuous oppression and violations of the rights of Ambazonians as a people, including through torture, enforced disapearances of activists, a limited access to education and economic growth opportunities for ordinary citizens, cultural assimilation, denial of the right to development for the inhabitants of the territory and denial of the right to life through the unlawful killing of Ambazonian civilians. On 27 November 2017, the government of Cameroun under Paul Biya officially started a violent “counter-insurgency” operation following mass protests in the region against the government, resulting in the current crisis.

The current crisis that Ambazonia is trapped into leads to violent acts against women, who are easy targets. Rape, torture, abduction are among the common violations facing women in Ambazonia.

It is thus important for women to rise and stand for their rights, and raise the voice of those who can't. Amabo Cecilia Binwi is among those Ambazonian women who decided to make human rights activism their purpose in life.