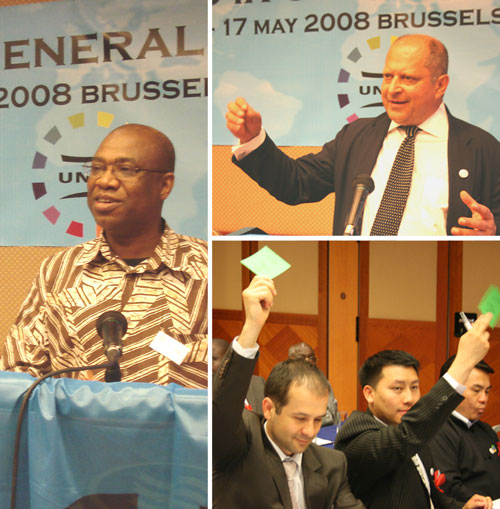 Regional Autonomies and Federalism in the Context of Internal Self-Determination

The IX UNPO General Assembly was organised at the European Parliament with full attendance of UNPO Members and delegates from all over the world. After two days of discussing the new political common vision of the organization, it was decided to profoundly restructure the Preamble of the Covenant of the organisation, the political driving force of UNPO.

The path to put UNPO and its Member’s central to the international political arena was essential. This document represents a milestone and major change in UNPO history since its foundation in 1991.

The work of the General Assembly has been introduced by Member of the European Parliament and leader of the Nonviolent Radical Party Mr. Marco Pannella. Furthermore two substantial reports on Gandhian nonviolent civil resistance and diverse forms of regional autonomy and federalism were presented. These reports by Ledum Mitee Esq., President of the UNPO General Assembly, and Mr. van Walt van Praag, provided background information on the concepts, including references to key thematic research.

The report delivered by Ledum Mitee Esq. entitled ‘Gandhian Nonviolent Civil Resistance’ can be downloaded by clicking here (PDF format, 49kb).  To download a copy of the report given by Mr. Van Walt Van Praag on the topic of ‘Regional Autonomies and Federalism in the Context of Internal Self-Determination’, please click here (PDF format, 57kb).

The topics of climate change, potable water and food shortages will have immeasurable devastating effects on the stability in the world today.

The General Assembly resolved to elect Ledum Mitee Esq., leader of the Movement for the Survival of Ogoni People in Nigeria as the President of the UNPO, and Ms. Maysing Yang, Vice Minister of Oversees Compatriot Affairs Commission of Taiwan as its Vice President. The convention further elected Senator Marco Perduca, member of the Italian Senate for the Democratic Party as Treasurer to the organization. Mr. Marino Busdachin was re-elected for a term of three years as Secretary General by unanimous vote.

Preamble to the UNPO Covenant

Adopted by the UNPO General Assembly

Affirming the principles of Democracy, as enshrined in the Vienna declaration, as fundamental and inalienable human rights;

Aware that individual rights are inextricably linked to the recognition and protection of collective rights, as well as the free expression of collective identity, religious beliefs, and dignity;

Convinced that the existence and enjoyment of these political and civil rights are themselves the product of past struggles and solidarity, and that a continued and committed effort is still necessary in order to achieve their universal and effective implementation;

Whereas the right to self-determination is enshrined in the United Nations Charter, the International Covenants on Civil and Political Rights, the International Covenant on Economic, Social, and Cultural Rights, and the UN Declaration on the Rights of Indigenous Peoples, its implementation should be based on its broadest and most comprehensive understanding; including autonomy, devolution, and power-sharing, and federalism in all its forms, rejecting thereby a narrow focus and charges of secessionism;

Convinced that the principles, methodology, and practice of Gandhian nonviolence and nonviolent civil-resistance are the most effective means of pursuing and enforcing both collective and individual rights, we, the undersigned Nations and Peoples, reaffirm our unreserved commitment to such principles, rejecting in the process terrorism, extremism, and violence in all its forms;

Convinced that the protection of the environment and its natural resources, in particular in the context of climate change and related shortages of potable water, is linked to the fundamental rights of Nations and Peoples everywhere, necessitating respect for the enshrined rights of free, prior, and informed consent, so as to guarantee their right to determine their own future and the protection and respect for their ancestral lands and resources;

Aware that whilst the forceful transfer of populations and other forms of demographic manipulation, including ethnic cleansing, represent serious breaches of universal rights, the free circulation of ideas, information, people, and capital should be guaranteed as central to the promotion and affirmation of freedom and democracy everywhere;

The IX UNPO General Assembly also saw welcomed into the Membership two new members.  First to be accepted were the Afrikaners of South Africa, represented by Dr. Pieter Mulder and Dr. Frik van Heerden of the Freedom Front Plus (VF+) party.

They were in turn joined by representatives of the National Council of the Union of Burma (NCUB), Mr. Maung Chan, and the Venerable U. Uttara of the Sasana-Moli International Burmese Monks Association.

After their formal signing of the UNPO Covenant, both new Members joined in the discussion which during the afternoon centered on the General Resolution of the General Assembly.  The text, which was adopted after much careful consideration, expressed the Members’ support for the mission of UNPO and the increasing participation in the organization by Members.

The General Resolution also reached out beyond the UNPO Membership to express Members’ support for the ongoing global struggle for human rights, democracy, and freedom of expression.  Receiving particular attention were calls for action against the proliferation of landmines and the need for the international community to take concrete action in investigating the situations in Burma and China in the wake of events in 2007 and 2008.

The full text of the General Resolution, as adopted by the IX UNPO General Assembly can be read below:

Adopted by the UNPO General Assembly

The IX General Assembly of the Unrepresented Nations and Peoples Organization (UNPO) held in Brussels, Belgium from 16 to 17 May 2008;

Expresses its solidarity with all Members and other victims of oppression who are struggling for their rights worldwide;

Assured that the struggle of each UNPO Member is a struggle not only for the rights and freedoms of their own people, but a struggle to strengthen and further the cause of freedom and democracy everywhere;

Delighted and thus encouraged by the increasing participation in UNPO and the growing support for UNPO around the world, especially within the European Parliament;

Alarmed by the number of Members which continue to report to the General Assembly on ongoing conditions of oppression and the widespread violation of their human rights;

Reaffirms the commitment of each and all UNPO Members to the principles of democracy, nonviolence, and self-determination, as expressed in the Preamble to the Covenant of UNPO;

Calls upon the international community to recognises that the 21st century presents the world with new challenges on matters of human security, the environment, the economy, social welfare, and culture, affecting many communities who are not adequately represented in international fora, thus underscoring the importance and urgency of the work of the UNPO;

Reaffirms the commitment of all UNPO Members to the principles, methodology, and practice of nonviolence and civil-resistance, recognising these as the most effective means of opposing oppression in a dignified, effective, and conscionable manner;

Reaffirms support for the fundamental right to self-determination of all peoples as a means of realising their political, economic, social, and cultural development, stressing in this context the importance of a broad and inclusive implementation of this right;

Demands governments around the world to intensify the process of demilitarisation, and to ban the manufacture, sale, and export of weapons, military equipment and landmines;

Reminds the international community that most states are multi-ethnic, multi-religious, and multi-lingual, stressing in this context the continued importance of safe-guarding and respecting the rights all nations and peoples;

Reminds the international community that security and stability everywhere, especially in the Middle East, depends on respect for the collective rights of all nations and peoples, and assurances of their right to partake in the political process;

Insists that the UN Human Rights Council take a more proactive role in supporting rights of minorities, in particular with respect to Special Procedure mandate-holders’ Missions where state parties continue to impede their work and access;

Gravely concerned with the urgent human rights crisis currently faced by the peoples of Burma and Tibet;

Calls upon the international community and the UN Human Rights Council, further to uprisings in Burma and Tibet in September 2007 and March 2008 respectively, to take immediate and concrete measures, such as fact-findings missions, to address the nature and extent of human rights violations;

Salutes and is encouraged by the fact that despite the brutal military crackdowns, the people of Burma and Tibet have persisted in their nonviolent struggle for peace, freedom, and democracy.