Below is an article written by UNPO representative Vien Thatch:

The Khmer Krom delegation held a demonstration in the European Parliament in Strasbourg to support the resolution on the Human Rights abuses in Vietnam.  The delegation consisted of 18 Khmer Krom supporting members among whom were 5 Buddhist monks. It took place on the 22 and the 23 of October. 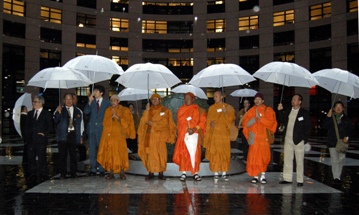 On our arrival at the European Parliament at around 3.20 p.m., we were warmly received despite the rain, by Nicola Dell'Arciprete and MEP Marco Cappato who promptly brought me to the Press Conference where I had opportunity to speak for 10 minutes about the Khmer Krom Human Rights issues in Kampuchea Krom (Vietnam), particularly my concerns on the imprisonment of Khmer Krom Buddhist Monks and the problems of land grabbing and confiscating, that our community in the homeland is subject to. I drew attention to the detention of Tim Sakhorn.   MEP Marco Cappato urged the European Commission to engage in negotiations with Hanoi.  Following the Conference, MEP Marco Cappato agreed to submit a Universal Periodic Review to the UN on Khmer Krom Human Rights Violations in Vietnam.

From 6 p.m., we demonstrated outside the Palais in spite of the rain. Our Buddhist Monks chanted for peace for more than 30 minutes. At the same time we distributed our flyers and documents.

In the early morning of October 23, our delegation continued the demonstration from 8.30 a.m. with the support of the Transnational Radical Party members lead by MEP Marco Cappato and several others to thank the European Parliament members who supported the resolution in overwhelming numbers. Our demonstration ended at around 9.30 a.m.

To read the European Parliament resolution on the new EU-Vietnam Partnership and Cooperation Agreement and Human Rights please click here.