During the week of 20  November 2017 the Unrepresented Nations and Peoples Organization (UNPO) – in collaboration with Mr Francisco Assis MEP (S&D) and Marisa Matias (GUE/NGL) and with the support of the Nando and Elsa Peretti Foundation – received a Brazilian delegation in Brussels to raise awareness for the cause of the Guarani-Kaiowá and other indigenous peoples in Latin America. The visit to Brussels – taking place a year after a delegation from the European Parliament went on a Fact- Finding mission to Mato Grosso do Sul’s indigenous communities – is part of a continuous effort to raise awareness of the grave human rights violations towards indigenous peoples in Brazil.

The delegation, made up of Guarani-Kaiowá leaders Inaye Lopes Gomes and Daniel Lemes Vasques and deputies Janete Capiberibe and Paulo Fernando dos Santos, took part in a series of events and meetings. One of these events was the launch of an informal group of Friends of Indigenous Peoples of Latin America in the European Parliament. One of the most pressing issues discussed throughout the week were the possible harmful implications of European corporate interests and how Europe’s involvement could foster positive change in the Mercosur region, particularly relevant in the context of the ongoing EU-Mercosur negotiations.

The first event on 20 November 2017 was the movie screening of “Terras Brasileiras”, directed by Dulce Queiroz, which shed light on the Guarani-Kaiowá struggle, as well as on the perspective of landowners. During the opening remarks, Francisco Assis MEP highlighted the grave human rights violations against indigenous people in Latin America, in particular the Guarani-Kaiowá peoples of Brazil. He showed his support for the cause and reinforced his commitment to defending their rights as stated in the Brazilian Constitution as well as international treaties. Following the movie screening, Marisa Matias MEP opened the discussion by sharing her experiences of when she visited the Guarani- Kaiowá communities in 2016 and admires their strength to keep fighting for their territorial rights. Members of the Brazilian delegation then took the floor to share their thoughts on the movie and the issues portrayed in it. 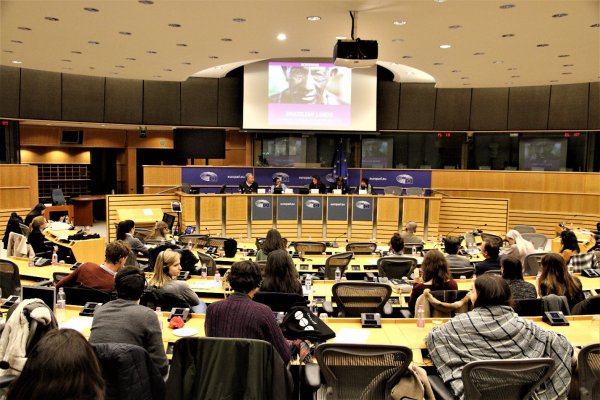 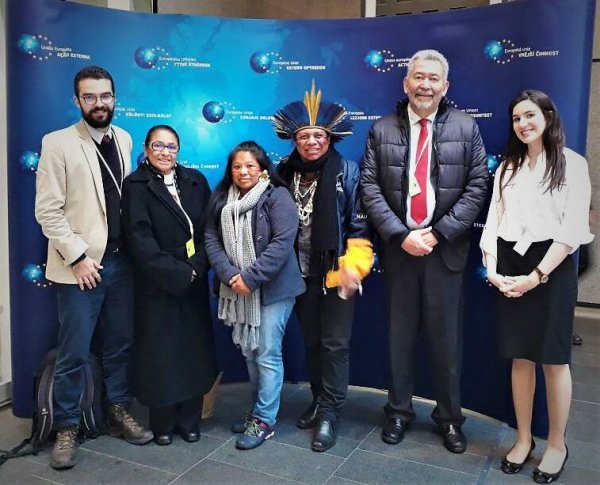 With the aim of harnessing cooperation between the the European External Action Service (EEAS) and indigenous rights advocates, the delegation visited the institution on 21 November 2017 to have an exchange of views on tangible strategies the EU can develop in fostering indigenous rights in Latin America.  Representatives of the EEAS included the Head of the Division for Relations with South America, Mr Koetsenruijter, Policy Officer of the Human Rights Division Ms Tove Soevndahl Gant, Deputy Head of the South America Division, Mr Jean-Pierre Bou, as well as Policy Officer of the Americas Department Regional Affairs, Mr Andrea Rossi.  During the meeting, the delegation spoke about the unfolding situation in Brazil with regards to indigenous rights and how the EU can play a leading role as it is a major importer of Brazilian commodities. The EEAS highlighted the important relationship that Europe has with Brazil and suggested that other countries around the world join the EU in holding Brazil accountable for its violations against indigenous communities.This meeting was important as the EU pledged its continuing support and commitment to the indigenous cause.

On the occasion of the European Parliament’s Subcommittee on Human Rights’ (DROI) Exchange of Views on the Rights of Indigenous Peoples in Myanmar, Bangladesh, Brazil and Chile, UNPO’s Fernando Burgès participated as a guest speaker and gave the opening speech on the right to consultation and participation of indigenous peoples of Brazil and Chile. Also participating in the exchange of views was the Brazilian Delegation. Mr Burgès highlighted that despite rights being officially recognized, indigenous peoples of both countries are severely underrepresented at all levels of institutional governance, from parliament to local councils.  For Brazil, the biggest challenge for indigenous people is the increased development of largescale foreign investment on indigenous land, which is being negotiated without the consent of the traditional owners. Following this event, the Brazilian Delegation met with Ignazio Corrao MEP, a highly committed supporter of indigenous rights within the European Parliament. In last year’s Fact-Finding mission to Brazil, a representative of Mr Corrao participated in his place. This meeting gave the delegation the chance to finally meet him in person. During the meeting, Mr Corrrao stressed his disfavor of corporations taking advantage of indigenous communities and promised his future collaboration to counter the injustices caused by pressure from the powerful agribusiness lobby. 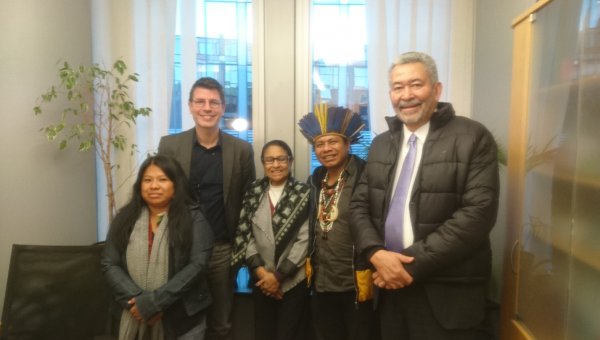 At the end of the delegations’ visit, on 22 November 2017 UNPO, in collaboration with Francisco Assis MEP organized a conference on indigenous rights in Latin America. The conference was on the occasion of the launch of the European Parliament Friendship Group for Indigenous Peoples of Latin America. Marino Busdachin, UNPO’s Secretary General opened the conference by congratulating the strengthened relationship between the European Parliament, the Brazilian Congress and Brazil’s indigenous community. He finished his speech by quoting Noam Chomsky “only indigenous people can save the ecosystem and keep the environmental balance sustainable as corporations do not care at all”. During the opening remarks, Francisco Assis MEP and Chair of the EP Delegation for relations with Mercosur also took the floor to stress that it is the first time that the countries of Mercosur will establish a trade agreement with another region of the world that incorporates human rights clauses, and that this is already a significant progress in aiming what we want to achieve, which is justice for indigenous peoples throughout Latin America. 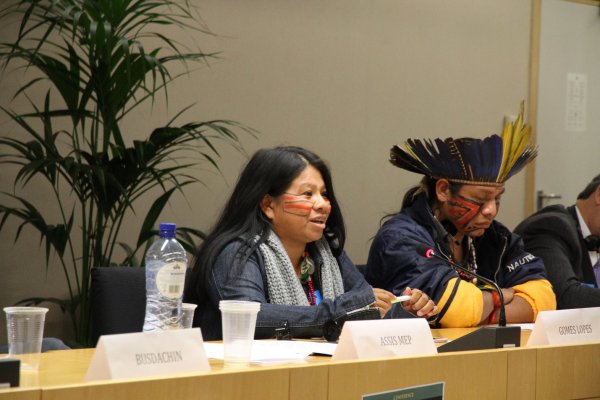 Inaye Gomes Lopes, a young Guarani-Kaiowá community of Ñanderu Marangatu leader and teacher, commenced the first panel by sharing her testimony of the reality she and her community face in the re-occupied land. She also underscored how welcome she feels in the European Institutions where she can have her voice heard, as she and other indigenous people are not given a forum to speak in Brazil. The next speaker, Daniel Lemes Vasques, the Vice-chief of the Guarani-Kaiowá community spoke about how pleased he was by the outcome of this weeks’ events and plans to share the good news with his village. In finishing his statement, he underscored the importance of Europeans to be conscious of the products they eat from Brazil and how it negatively impacts their lives.  Brazilian Deputy Paulo Fernando dos Santosthen focused on the harsh budget cuts of the National Indian Foundation (FUNAI) and drew attention to the correlation between the organizations’ financial cuts and the worsening situation. Before the second panel, long-standing supporter Julie Ward MEP took the floor to share her most recent experience in Brazil's North Marabá, where she spent two weeks in July 2017 participating at the Project Rios de Encontro. 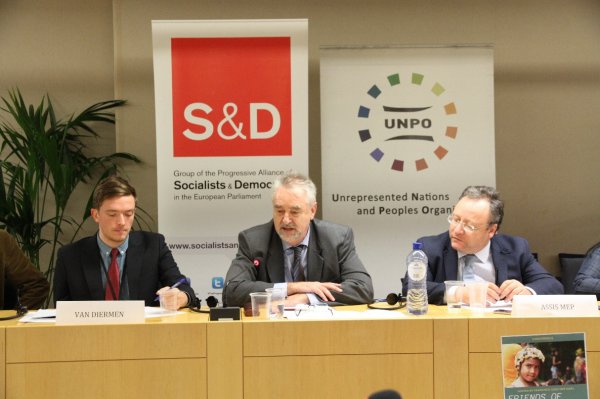 The second panel, focusing on the European Support for Indigenous Rights was introduced by Deputy and defender of indigenous rights in the Brazilian Congress, Janete Capiberibe. She gave chilling accounts of numerous incidents of targeted indigenous groups, and insisted that 900,000 indigenous people live in Brazil, making this issue of the utmost importance. Adrianus Koetsenruijter expressed that Mercosur is not only a free trade agreement, but also a rules and values based trade agreement, which is why we are pushing to uphold human rights.

In concluding the conference and launch of the Friendship Group, UNPO’s Fernando Burgés and Francisco Assis MEP reiterated the need to advance a greater political partnership with Brazil. Fernando Burges highlighted that Brazil has signed prominent indigenous rights protection treaties, including the ILO Convention 169, the UN Declaration on the Rights of Indigenous Peoples in 2007 and the American Declaration on the Indigenous Peoples in 2016, which should make this problem easier to find a solution to. He concluded by saying that the aim of this friendship group is to raise awareness of all indigenous groups in Latin America and that the EU has become the indigenous peoples’ last hope to fight for their human rights.

Before leaving Brussels at the end of the three-day visit, the Indigenous leaders stressed that they would return to their communities filled with hope, knowing that there are supporters in Europe that are strongly committed to stand by them in their struggle for justice. Inaye Gomes Lopes closed the last event of the visit with the following words, showing her unwavering persistence in the defense of her people: “We are strong because we are resistant. We do not want any more deaths. We do not want all of Brazil, we just want what belongs to us”.

UNPO is thankful to Francisco Assis MEP and Marisa Matias MEP for welcoming the delegation from Brazil in the European Parliament, as well as to Julie Ward MEP and the other members of the European Parliament who have showed their support for the indigenous rights cause over the course of the last years. This project has been made possible thanks to the financial support offered by the Nando and Elsa Peretti Foundation. UNPO is also grateful to Funai and Cimi, for their organisational support which made the visit of indigenous leaders to Brussels possible.