On 22 November 2017, the European Parliament’s Subcommittee on Human Rights (DROI) held an Exchange of Views on the rights of Indigenous Peoples, notably in Myanmar, Bangladesh, Brazil and Chile. The focus of the discussion was on the right to consultation and participation of indigenous peoples in public policies and legislation and also the right of access to justice in order to claim their human rights and seek redress for violations. The session was attended by Members of Parliament (MEPs), representatives of Indigenous Peoples, human rights advocates and with input from academics. The delegation from Brazil that were brought to Brussels by UNPO for the Friends of Indigenous Peoples of Latin America Conference were also in attendance.

Representing UNPO, Programme Manager Fernando Burgés gave the opening speech on the right to consultation and participation of indigenous peoples of Brazil and Chile.

This speech was centred on the principle of free, prior and informed consent in regards to indigenous peoples and how the governments of Chile and Brazil fail to fully implement this principle. Despite being officially recognised, the indigenous peoples of both countries are severely underrepresented at all levels of institutional governance, from parliament to local councils. For Brazil, the biggest obstacle for indigenous consultation is the expansion of largescale foreign investment on indigenous land, which is being negotiated without the consent of the traditional owners. For Chile, indigenous political participation or consultation has no legal backing as Chile has not recognised its indigenous peoples within their constitution. Although the issues slightly differ, the lack of implementation or even ratification of conventions all contribute to the perpetuation of the hardship faced by indigenous peoples in Brazil, Chile and worldwide. 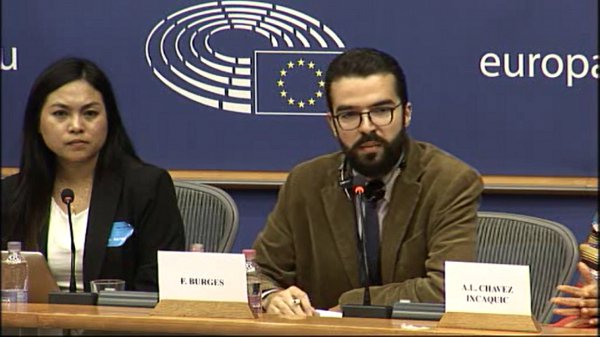 Ms Aura Lolita Chávez, Leader of the Council of K’iche Peoples of Guatemala (CPK) and Sakharov Prize nominee, spoke on the obstacles indigenous peoples face in accessing justice and of the severe human rights violations indigenous peoples of Latin America.  Ms Chavez emphasised the negative impact trans-national corporations in Guatemala, where large corporations violate human rights of indigenous communities with full impunity, implementing land grabs and intimidation along with the use of violence and sexual violence.

Ms Maithin Yumon, representing the Executive Committee of the Asia Indigenous Peoples Pact (AIPP), focused upon the rights of indigenous peoples in Bangladesh and Myanmar. Ms Yumon spoke at large on the issues faced by indigenous communities in the Chittagong Hill Tracts region of Bangladesh, collectively known as the Jumma People, who are a member of UNPO.  Ms Yumon re-emphasised UNPO’s recommendation that in order for indigenous peoples to claim their rights, these states must recognize their indigenous peoples in their constitution alongside the ratification and implementation of international human rights conventions, such as ILO Convention 169.

In a speech read by MEP Klaus Buchner, Brazilian social scientist Prof Antônio Andrioli touched on the tension between the rights of indigenous peoples and the Brazilian pursuit of largescale foreign investment. In particular, the removal or prevention of legislation for the benefit of foreign investors and agribusiness that was intended to improve the lives of Brazilian indigenous peoples, such as reduced deforestation and better access to healthcare.

Engaging in the discussion was MEP Barbara Lochbihler, who welcomed the issue of sexualised violence being used against indigenous peoples and activists being raised by Ms Chavez, which is of particular relevance as 25 November is the International Day for the Elimination of Violence against Women.

The discussion was well received and engaged with by the attending MEPs which is indication that the rights of indigenous peoples in these countries but also globally, is an issue that is gaining increasing support within the European Parliament. UNPO hopes that the EP will continue to host sessions such as this to further increase awareness of the many human rights violations and issues that face indigenous peoples.