On 31 May 2017, The Unrepresented Nations and Peoples Organization (UNPO) thanks to the support of the Nando Peretti Foundation and along with fellow hosts Mr Xabier Benito Ziluaga MEP (GUE/NGL), Mr Urmas Paet MEP (ALDE), Mr Francisco Assis MEP (S&D), Mr Ignazio Corrao MEP (EFDD), Pier Antonio Panzeri MEP (S&D) and Mr Pascal Durand MEP (Greens/EFA) organised a conference entitled “The Guarani-Kaiowá and the Assault on Indigenous Rights in Brazil” at the European Parliament in Brussels. The high-profile event gathered speakers representing international NGOs, academia, European institutions and Guarani-Kaiowá indigenous leaders. Over three panels, experts provided insights into a broad array of topics, such as ancestral land rights, indigenous rights defenders, and the role of the European Union in preventing indigenous rights violations. Two indigenous leaders gave first-hand testimonies of the violence their peoples face in hopes of raising the profile of the indigenous Guarani-Kaiowá, and also to help Europeans better understand the greater, damaging implications of corporate interests and governmental impunity in Brazil. 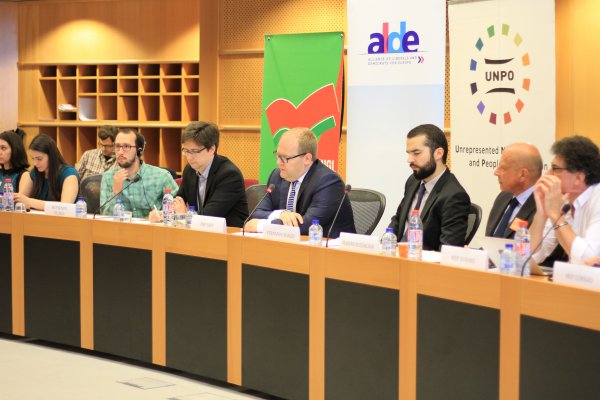 During the opening remarks, the conference hosts stressed the importance of promoting indigenous rights in light of the dire situation of the Guarani-Kaiowa, along with many other indigenous peoples of Brazil. Co-host Urmas Paet MEP opened the conference by acknowledging that indigenous peoples are witnessing perpetual human rights violations across the world – rape, discrimination, death threats, killings, dispossession of their land, and displacement are everyday occurrences.  Xabier Benito Ziluaga MEP then spoke to Brazil’s specific modus operandi of land-grabbing from indigenous peoples, explaining that much of the violence against indigenous peoples is either directly or indirectly funded or initiated by the government. Mentioning that ecologists continually support actions by the European Parliament to protect indigenous lands and cultures, Pascal Durand MEP professed that “It is a matter of preserving life as a whole; it is a matter of humanity.” 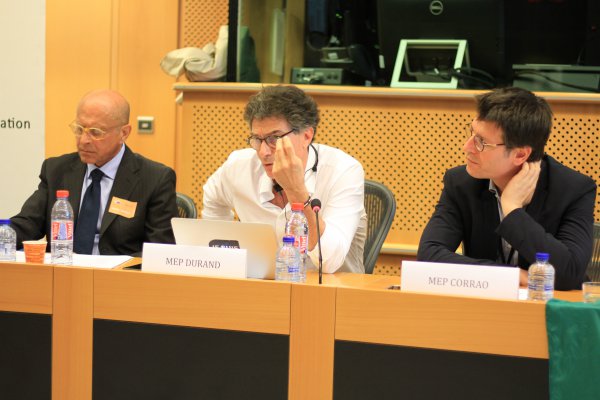 Highlighting the economic motivations behind much of the violence in Brazil, Ignazio Corrao MEP declared: “What we are witnessing is a genocide for business because there are no political, social, religious or cultural reasons behind these acts.” Speaking on behalf of Francisco Assis MEP, Mr Rui Carlos Morais Lage expressed particular concern with recent developments in Brazil, stating that “The EU should recognise indigenous peoples as legitimate interlocutors in all decisions and discussions that affect their rights.” Closing the first panel, UNPO Secretary General Marino Busdachin made note of the discord between the progressive Brazilian constitution and the scenario on the ground for indigenous peoples. The failure of the Brazilian government to implement any of the protections set out within that constitution is disturbing, but the ongoing human rights violations against indigenous peoples speak to a deeper issue – institutional corruption and policy hypocrisy. Ramon Tremosa I Bachells MEP, who was attending the conference, then took the floor to express his solidarity with the Guarani-Kaiowá in their fight to protect their identity. 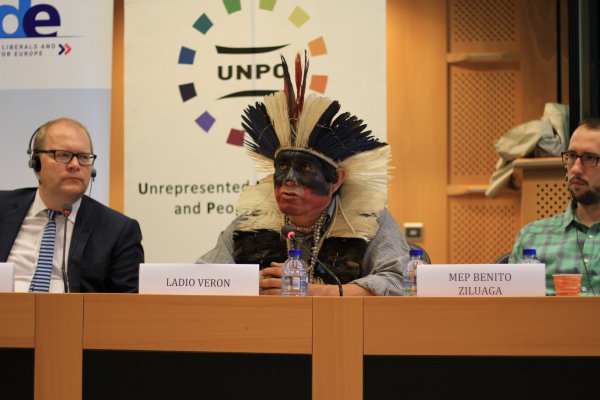 The first panel, which was moderated by Xabier Benito Ziluaga MEP, began with a powerful testimony from Ladio Veron, chief of the Guarani-Kaiowá "Taquara" tribe, who risks his life on each occasion where he speaks out against this violence. He confirmed that the killings and mass displacement are carried out with utter impunity; no one is held accountable for the suffering inflicted upon the Guarani-Kaiowá. Drawing attention to the mass deforestation that also displaces indigenous peoples, Dr Fernando Mestre Sanchís stressed that economic interests of big business are commandeering attention from the detrimental human and ecological impacts. Dr Barbara Arisi, a researcher at the VU University of Amsterdam in the Netherlands, spoke clearly about Brazil’s intent in prioritising businesses over the very people who have tended these ancestral lands for millennia. Marisa Matias MEP took the floor to express solidarity and conveyed that the European Parliament is well aware of what is going on in Brazil, namely that commercial interests have overtaken the fundamental rights of indigenous peoples. 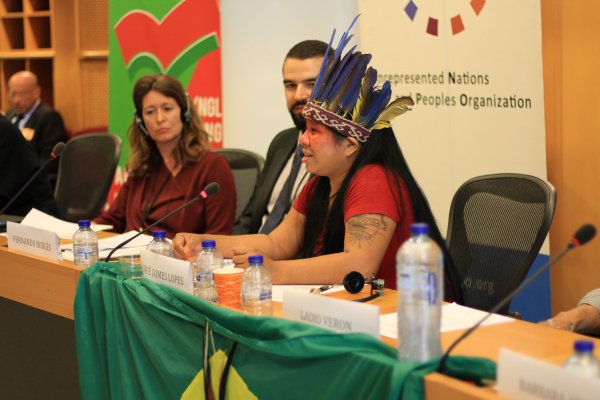 Inayê Gomes Lopes, a 28 year old Guarani-Kaiowá community leader and teacher, commenced the second panel by giving a chilling account of the violence that has stripped her community of its resources, livelihoods, and dignity. Emma Achilli, Head of Front Line Defenders' Brussels office to the European Union, gave an insightful presentation on the current situation for indigenous communities in Brazil, a situation which is mirrored by the inhumane treatment of indigenous peoples, and particularly indigenous rights defenders, across the world. Estefania Torres Martinez MEP took the floor to denounce the sinking standards of democracy in Brazil, stressing that there must be a collective effort to raise pressure on those in power and hold them accountable for the incessant oppression against indigenous peoples. 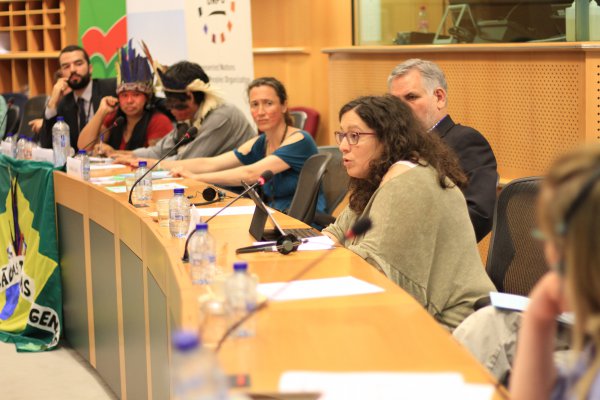 UNPO Project Officer Lukas van Diermen opened the final panel by introducing Ms Tove Søvndahl Gant, a policy officer at the European External Actions Service's human rights division Global 1 where she is responsible for the rights of indigenous peoples. Ms Søvndahl Gant explained that the European Union has supported the 2007 UN Declaration on the Rights of Indigenous Peoples (UNDRIP), and it is paramount that the EU take further initiatives to ensure that these rights are upheld through direct dialogue with Brazil. Xabier Benito Ziluaga MEP went on to emphasise that there must be protection put in place for indigenous leaders such as Ladio and Inayê, who speak out against the injustices their peoples face daily and put themselves at risk for their communities. UNPO Programme Manager Fernando Burgés closed the conference by clarifying that the challenges faced by the Guarani-Kaiowá are manifold and complex, tracing back to a long history of oppression which has resulted in contemporary structural and systemic inequality. Following UNPO’s 2016 fact-finding mission to Brazil, Mr Burgés underscored that the culture of institutional impunity in Brazil has essentially allowed the historical violence against indigenous peoples to evolve into exploitation and eviction. It is more critical than ever before to ensure that indigenous peoples such as the Guarani-Kaiowá have access to mechanisms of justice; as of now, they are precluded even from the fight for their own rights. 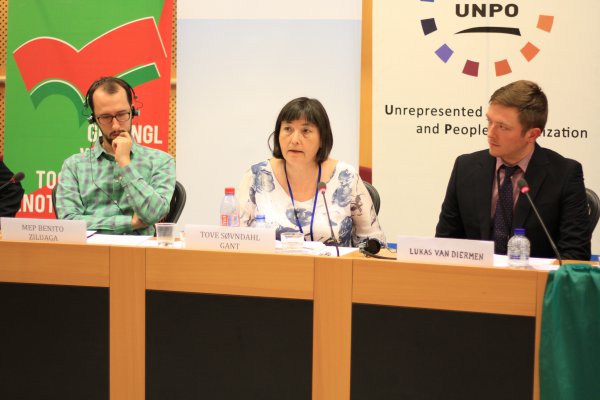 Below is the full final declaration of the conference:

In light of everything that has been said today, we, participants of this conference:

Express our deep concern with the structural and direct violence against indigenous peoples in Brazil. From racism, discrimination and hate speech to threats, rapes and killings, indigenous peoples are exposed to gross human rights violations.

Reaffirm the urgency to move beyond the current impasse in relation to land demarcation. Despite political obstacles in the judiciary and the legislature, the Brazilian executive power can no longer delay to fulfill the indigenous rights to land, which is provided in the 1988 Constitution.

Call on the Brazilian authorities to reverse the current political and institutional weakening of FUNAI and, instead, provides it with sufficient budget and staff so that it can fulfill its mandate properly