This year’s UN Forum on Minority Issues brought together minority representatives from all over the world to open up a dialogue with other groups and the UN Human Rights Council on the theme of “Minorities in situations of humanitarian crises”. For two days [24-25 November 2016], the Forum addressed issues such as a lack of effective mechanisms to ensure the protection of minorities and the intersecting and multifaceted forms of discrimination suffered in humanitarian crises. The Unrepresented Nations and Peoples Organization (UNPO) participated in this year’s forum, with Mirza Wahajat Hassan of Gilgit-Baltistan taking the floor on the organisation’s behalf. UNPO was also joined by many UNPO members and partners such as Acheh, Afrikaner, East Turkestan, Ogaden, Trieste, Savoy, Ahwazi, Balochistan, Southern Mongolia, Acheh, Western Thrace and the Association des Nations de l’Hexagone (ANH), all joining into the discussion to raise awareness of the various manners in which minorities are oppressed and discriminated against. Despite attempts by some UN Member States to silence minority representatives, the Forum stimulated an interesting debate and allowed a large number of communities to share their perspective to some of the major humanitarian crises in the world.

The forum opened with a statement by the acting Director-General of the United Nations Office in Geneva Negash Kebret Botora, followed by remarks by the UN High Commissioner for Human Rights, Mr Zeid Ra’ad Al Hussein and considerations of the UN Special Rapporteur on Minority Issues, Ms. Rita Izsák. The remarks focused on how minorities are the most vulnerable communities in times of crisis, as all pre-existing human rights concerns regarding minorities, such as discrimination, exclusion and structural inequality, will more likely be exacerbated. The 9th session of the UN Forum on Minority Issues therefore aimed to catalyse a discussion on how various humanitarian actors can advance minority rights.

Mr Mirza Wahajat Hassan, exiled Chairman of the Gilgit-Baltistan Thinkers Forum took the floor on behalf of UNPO, to highlight the imminent humanitarian and environmental crisis taking place in his territory. Mr Hassan placed a particular focus on the dangerous repercussions of the China-Pakistan Economic Corridor (CPEC) and Diamer-Bhasha Dam on the ecosystem and indigenous populations. 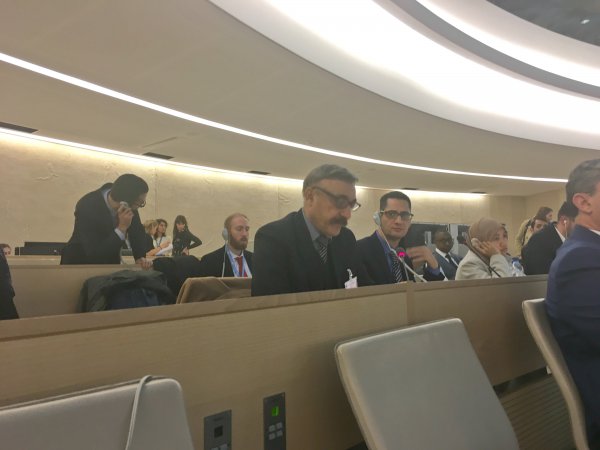 Enghebatu Togochog, director of the Southern Mongolian Human Rights Information Center (SMHRIC), explained how practices by Chinese extractive industries such as mining are leading to the destruction of rural communities in Southern Mongolia. This was interrupted by the Chinese delegation, denouncing the speaker as a separatist, supported by the delegations from Venezuela, Pakistan, Libya, Cuba, Syria, Russia and Iran. Calls to defend the right of free speech in the forum by the Austrian, US and UK delegation, allowed Mr Togochog to continue elucidating the destruction of the Southern Mongolian ecosystem and the displacement of thousands of peoples through widespread land grabbing practices.

Roland Coste of the Direction Aux Affaires Savoisiennes gave an overview of Savoy’s pressing problems of pollution, and the French government’s lack of provision of any tangible solutions. Pollution in Savoy causes 60 premature deaths per year and, according to Mr Coste, highlights a clear discrimination between Paris and Savoy, with far more initiatives to tackle pollution taking place in the capital. (Click here and here for his speeches)

Moreover, a representative of the “Nations of the French Hexagone”, spoke on behalf of different Corsicans, Savoysians and Bretons and stressed the importance to protect cultural heritage so it can be passed on to future generations. The representative also underlined the importance of overcoming the centralised sense of identity propagated by the French state, calling for the introduction of a mechanism that ensures minority rights.

Representing the Free Territory of Trieste, Marco Pizzi took the floor on behalf of Triest NGO, emphasising that minorities in Trieste do not have the right to identify themselves with their own culture and family lineage, by having Italian surnames imposed on them. Mr Pizzi called for an end to this form of Italianisation and an official apology from the Italian government.

The Anti-discrimination Centre Memorial brought up the plight of the Crimean Tatars, stressing the very concerning lack of protection of the community under Russian illegal occupation.

A representative of African Rights Monitor explained the situation of the people of Ogaden, and how there have been no visits from the UN or media to see that no recommendations from member states and UN Human Rights Council have been adopted by the Ethiopian government. Moreover, Abdirahman Mahdi, representative of the Ogaden People’s Rights Organisation and Vice-President of UNPO, poignantly conveyed how no attempt has been made to address the gross human rights violations occurring in Ogaden, highlighting the case of the two Swedish journalists who were shot and detained when reporting from Ogaden. Furthermore, a representative from the Ogaden Young Women Group expanded on this by shedding considerable light on the issue of rape as a weapon of war used by paramilitary forces by the Ethiopian government. (Click here and here for both OHO speeches) 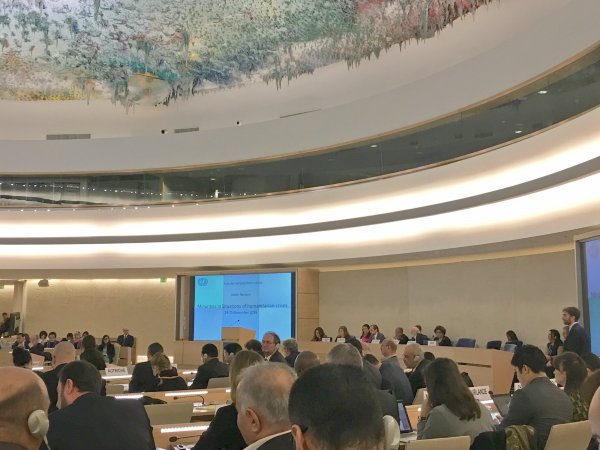 On its turn, the Federation of Western Thrace Turks in Europe (ABTTF), pointed out to the growing number of hate crimes against people of Western Thrace. They asked for the Greek national commission for human rights and the Greek government to investigate racism and intolerance against minorities in Greece, and to install an institutional framework to address minority issues.

A representative of IRA-Mauritania focussed his intervention on the diaspora of people of African descent in Muslim countries, especially the Haratin in Mauritania. A light was shed on the additional difficulties relating to basic economic and social rights, alongside slavery by descent which remains a widespread problem.

On behalf of Freedom Front Plus, Anton Alberts, representative of the Afrikaner community, explained how there is no legislative or institutional mechanism where minorities can regulate their own cultural rights. He expanded on this by stating how discriminatory legislation excludes the Afrikaner from labour and business markets. In addition to this, AfriForum took the floor clarifying how the current drought South Africa is facing is impacting the Afrikaner farming community twofold, and that they have not been provided with sufficient aid from the South African government.

Peter Irwin of the World Uyghur Congress elucidated the plight of Uyghur refugees who are fleeing the highly restrictive policies they face in East Turkestan, 60 of which remain in immigration detention facilities today. After being interrupted by the Chinese delegation, whose support from other delegations postponed Irwin’s speech by about 20 minutes, he went on to highlight the importance to protect vulnerable peoples escaping unbearable repression.

On their respective turns, representatives of Liberation and Voices for Peace spoke on behalf of the Chittagong Hill Tracts, giving an overview of the Jumma peoples’ fight for self-determination. Both explained the conditions of the Chittagong Hill Tracts Peace Accord of 1997, pointing out how these have not been implemented and how the indigenous communities still live under military rule. 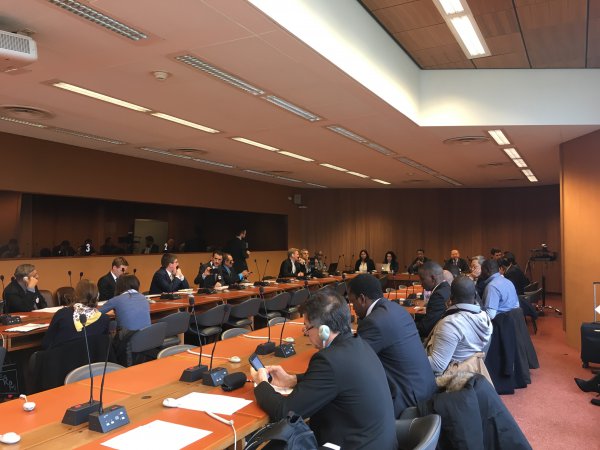 Monireh Shirani, UNPO representative for West Balochistan at UNPO spoke on behalf of the Balochistan Human Rights Group about the institutionalised inequality of the Baluch peoples in Iran, denied equal education as well as economic and political participation. She went on to shed a light on the pressing issue of the death penalty and arbitrary executions, and how the plight of the Baluch peoples is overlooked by the international community.

Furthermore, Sheyma Silavi, took the floor for the Ahwaz Human Rights Organisation (AHRO), underlining how the Ahwazi Arabs have historically been marginalised and discriminated against in Iran. When giving an overview of the situation of her community and mentioning the indigenous name for their province, Ms Silavi was interrupted and accused of using “fabricated names”. (Click here for speech by Ahwaz Education and Human Rights Foundation and here for speech by Democratic Solidarity Party for Alahwaz)

Asnawi Ali, representative of the Acheh-Sumatra National Lebration Front (ASNL), explained how the military offensive of the 1970s still impacts the Acheh community today. Mr Ali asked the UN for the persecution of those responsible for attacks on civilians, restoration of civilian institutions, ending of impunity within the military and re-allocation of resources. (Click here to watch the speech)

The UN Minority Forum offers a platform for UNPO, our members and minorities around the world to raise awareness for their situations and be given a voice that is systematically denied in the international arena. UNPO welcomes Rita Iszak’s support and promotion of minority rights in her term as Special Rapporteur for Minority Issues. Nonetheless, UNPO is appalled by the attitude of many representatives of UN Member States who tried to silence organisations willing to share the human rights violations facing their communities, by arguing that they were separatists if not terrorists. The Forum was created for minorities to be able to speak freely and for the world to be able to hear their oft-forgotten perspective. Similar attempts to block them from doing so are not respectful of the purpose of the Forum and of the right to freedom of speech, to which all States have signed up.

UNPO Members' statements are available for download from the right column.

The latest Report of the Special Rapporteur on Minority Issues can be found here.

You can also find more information on the UN Minority Forum.