On 25 November 2016, the Unrepresented Nations and Peoples Organization (UNPO), in cooperation with the Society for Threatened Peoples (STP), convened a side-event to the 9th Session of the United Nations Forum on Minority Issues. Entitled “Forgotten Crises, Forgotten Victims: Minorities and Humanitarian Challenges”, the event brought together representatives of minority groups, whose voice is rarely heard in the international media, to shed a light on their struggles and the humanitarian crises they are facing today.

In his opening remarks, Marino Busdachin, General Secretary of UNPO, shed a light on the fact that since the independence of East Timor, the UN has failed to advance the fulfilment of the right of self-determination, leaving minorities all over the world on the fringes of the international community. Hanno Schedler of the Society for Threatened Peoples expanded on this by highlighting the importance of this year’s topic. The introductory remarks also brought attention to the frequent interruptions of statements by UN Members States, which attempted to stop several representatives from completing their speeches.

The first speaker, Abdirahman Mahdi, representative of the Ogaden People’s Rights Organisation (OPRO), began by underlining the issue of multinational companies exploiting land in Ogaden for oil exploration, leading to extensive environmental degradation, cyclical man-made droughts and mass displacement. He stressed that “every area in Ogaden is a plot for sale to international companies”, leading to rampant human rights violations with Ethiopian paramilitary forces burning villages to clear the land.

This was then followed by Comrade Sunny Ofehe, founder and executive director of the Hope for Niger Delta Campaign, highlighting how multinational companies are also purchasing Ogoni land in Nigeria, causing widespread oil pollution. Ofehe also pointed out that peaceful Ogoni protests were repressed with military force, underlining that we need to work together to raise awareness of peoples “forgotten by their own governments and multinational companies, and to call for an end to impunity for violence against peaceful protesters”. 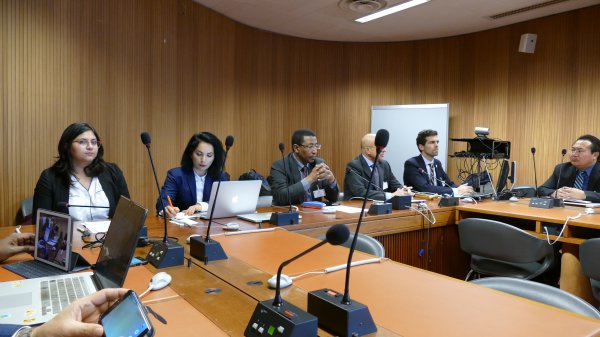 Sheyma Silavi, representative of the Ahwaz Human Rights Organization (AHRO), emphasised how environmental crises are also an issue for minorities in the Middle East, especially for the Ahwaz minority in Iran. Iran’s construction of dams diverts water to central areas leaving the Ahwazi community with a lack of water, which is then polluted by the oil exploration. This severely impacts the health of local inhabitants, who are then consequently admitted to hospital and are faced with a lack of medical support, as the province is one of the most improvised provinces although it produces up to 90 percent of Iran's oil.

Moreover, Abidine Merzough of IRA-Mauritania, illustrated the situation of the Haratin community in the Islamic Republic of Mauritania, where slavery remains a widespread practice. Mr Merzough highlighted how anyone protesting against slavery in Mauritania is soon imprisoned, with 16 members of IRA being arrested in 2016 alone.

Dolkun Isa, executive Chairman of the World Uyghur Congress, gave an overview of the plight of the Uyghur community of East Turkestan in China, who for 67 years now are subject to systematic assimilation policies and human rights violations. Mr Isa focussed on Uyghur refugees, who after fleeing the persecution they faced in East Turkestan are finding themselves in life-threatening conditions in detention centres and risk being deported back to China.

Furthermore, Enghebatu Togochog, director of the Southern Mongolian Human Rights Information Center (SMHRIC) clarified how Southern Mongolians have also been subjected to repression at the hands of the Chinese government. Mr Togochog shed a light on how the land reforms of the 1950s still impact Southern Mongolians today, with large scale immigration, intensive farming and land-grabbing leading to environmental degradation and an increasing number of internally displaced peoples.

Monireh Shirani, director of the Balochistan Human Rights Group, focussed her intervention on the impact of the death penalty on the livelihood of the Baloch community in Iran. Ms Shirani remarked how “when it comes to death penalty and executions we are overrepresented”, underlining the issue of secret executions in Iran. Moreover, she highlighted how Baloch prisoners are being moved, so that they cannot be kept track of, how some villages in Balochistan have seen their entire male population executed, and how this all points to the dire need for this issue to be perceived as a humanitarian crisis by the international community.

Before officially closing the conference, Dr Fiona McConnell of Oxford University and the Tibet Justice Center, presented a conference declaration. The full declaration can be found below:

We have heard excellent presentations in this side event on humanitarian crises affecting minority communities. We have heard detailed information from experts who know what the reality is on the ground in these regions and communities. We’ve been presented with detailed statistics, seen photographic  and video documentation and heard first-hand accounts of mass displacement, state intimidation and violence, and environmental disasters.

A wide range of contexts and regions have brought together in this event. But there two key common themes which it is important to highlight. First these are all minority communities that are disproportionally affected by complex and long standing conflicts and by natural disasters. As such, this event has provided concrete evidence behind Draft recommendation paragraph 7 which states that ‘minorities may suffer harsher consequences of conflict or disasters because of a pre-existing precarious social and economic position’. As a community of civil society actors and experts we urge the Forum on Minority Issues to follow up on this issue with relevant UN institutions and mechanisms, with the urgency that is so evidently needed.

Second these are all cases that are under-reported. International Media focuses attention only on a handful of cases of humanitarian crises, and even then they rarely focus how these crises affect minority groups. The communities and situations that have been discussed here today are ones that have been ongoing for decades, and have been repeatedly neglected by mainstream international media. So again, as a community of civil society actors and experts we call for raising the profile of minority communities in situations of humanitarian crises in all regions and contexts with the hope that by turning a spotlight on these issues, perpetrators of discrimination against minorities can be brought to justice.

The well-achieved goal of this side-event, was to raise awareness for minorities in humanitarian challenges largely overlooked by the international community. In the context of the 9th session of the UN Forum on Minority Issues, an event whose main aim is to provide a platform for minorities around the world and allow their case to be heard, the event sought to give a voice to minorities systematically silenced in the international arena by governments and international actors implicated in the humanitarian challenges they are facing.  The event concluded by urging the participants to continue raising awareness for these victims of forgotten crises, calling on political and legislative influencers to take action for their protection.