UNPO and Partners Launch New Report Documenting State of Iraq’s Minorities: “On the Verge of Disappearance”

On 4 July 2016, the Unrepresented Nations and Peoples Organization (UNPO), the Institute for International Law and Human Rights (IILHR), Minority Rights Group International (MRG) and No Peace Without Justice (NPWJ), launched a second joint report documenting the state of Iraq’s minority components since the advance of ISIS in 2014. The report, entitled “No Way Home: Iraq’s Minorities on the Verge of Disappearance”, is a follow-up report to “Between the Millstones: The State of Iraq’s Minorities since the Fall of Mosul”, published in February 2015.

Below is a joint press release published by the four organisations:

Minority communities in Iraq are now on the verge of disappearance, says a new report by the Unrepresented Nations and Peoples Organization (UNPO), Minority Rights Group International (MRG), Institute for International Law and Human Rights and No Peace Without Justice (NPWJ).

‘Thirteen years of war have had devastating long-term consequences for Iraqi society. The impact on minorities has been catastrophic. Saddam was terrible; the situation since is worse. Tens of thousands of religious and ethnic minorities have been killed and millions have fled for their lives,’ says Mark Lattimer, Minority Rights Group International’s Executive Director.

No Way Home: Iraq’s Minorities on the Verge of Disappearance documents how many thousands of persons belonging to Iraq’s ethnic and religious minorities have been murdered, maimed or abducted, including unknown numbers of women and girls forced into marriage or sexual enslavement, after the fall of Mosul in June 2014.

According to the international rights organisations, the Christian population, which before 2003 numbered as many as 1.4 million, is now under 250,000. Most of the Yezidi and Kaka’i have been forced from their traditional lands and are now internally displaced or have fled the country altogether, whilst Shi’a Turkmen and Shabak have been driven to the south.

‘Families are destroyed. Homes, businesses and farms have been looted. Heritage is either demolished or sold. Survivors will have nothing to return to, unless Iraq and the international community take more robust action to address the crushing needs of minorities,’ says William Spence Spencer, of the Institute for International Law and Human Rights. 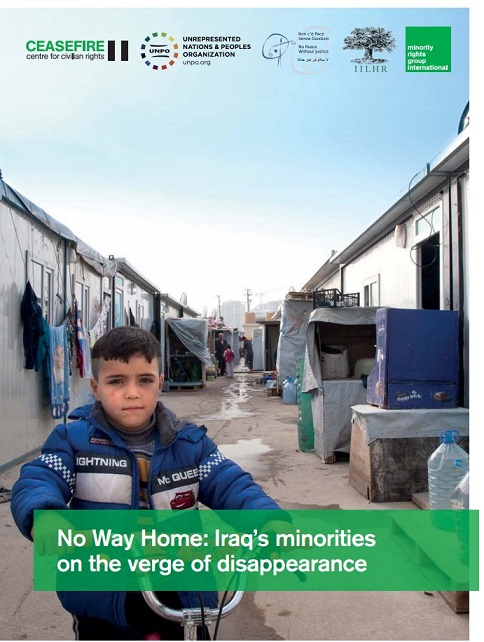 As ISIS swept through the Ninewa plains in the summer of 2014, the local population fled quickly. Latest reports indicate that approximately 3.4 million individuals, including over 1 million school-aged girls and boys, are now displaced, making Iraq the country with the highest number and fastest growing rate of people displaced in the world in 2015. Overall, the United Nations estimates that 10 million people have now been affected by displacement and are in need of humanitarian assistance.

Many uprooted by the violence within Iraq hoped they would be able to return home within a relatively short timeframe. However, internally displaced persons (IDPs) interviewed by the rights organisations said that the lack of basic services and security in many locations mean that as many as one in five of them feel that they have no choice but to flee the country.

The report makes key recommendations to alleviate the humanitarian crisis and prevent future human rights abuses, as well as making proposals on justice, reconciliation and asylum issues, and improving institutions and legislation.

“Iraq’s minority communities are feeling increasingly disillusioned and disappointed not only with the GoI and KRG, but also with the UN. This situation of protracted displacement is causing further tensions to an already dire situation, which highlights the urgent need for a long-term focus that goes beyond immediate security and relief”, says Johanna Green of the UNPO.

“Its unthinkable that crimes of this magnitude and impact are being committed with total impunity.  The Government of Iraq really needs to take urgent steps to provide redress to the victims – referring the situation to the International Criminal Court would be a good start,” says NPWJ’s Alison Smith.

The report also says that the anticipated displacement from a possible effort to retake Mosul could total as many as 1 million over the next year and the international community could witness the flight of hundreds of thousands of further refugees in 2016 alone.

No Way Home: Iraq’s Minorities on the Verge of Disappearance is based on extensive interviews and field research and is a follow-up report to Between the Millstones: The State of Iraq’s Minorities Since the Fall of Mosul, published in February 2015.

For interviews with report authors:

For interviews with Iraq partners: