Between the Millstones: UNPO Releases Report on State of Iraqi Minorities Since Fall of Mosul

On 27 February 2015 the Unrepresented Nations and Peoples Organization (UNPO), in collaboration with the Institute for International Law and Human Rights (IILHR), Minority Rights Group International (MRG) and No Peace Without Justice (NPWJ), released a breakthrough report capturing the current situation of minority groups within Iraq since the invasion of ISIS. The report follows a fact-finding mission to Iraq in November 2014 that assessed the status of Christian, Kaka’i, Shabak, Turkmen and Yezidi minorities within the country.

The launch conference, held at the International Press Centre in Brussels, was chaired by Mr William Spencer of IILHR. In his opening remarks he described how the investigation and the report had been motivated by the shocking deterioration in the status of religious and ethnic minorities in Iraq that have occurred since the invasion by ISIS of Northern Iraq in 2014. He reminded those present that although the report focuses on the role of ISIS in the persecution of minorities, the title of the report, Between the Millstones, was chosen to represent the long-standing discrimination that minorities have faced in Iraq; even though their situation has worsened since the involvement of ISIS, they have long suffered at the hands of the Iraqi state.

Ms Mays Al-Juboori from MRG then discussed the major findings of the report. She described how ISIS is one of the greatest sources of anti-intellectualism in the modern world. The group is founded on the principle of eliminating the diversity of cultures and religions that are present in modern Iraq through a process of cultural destruction and religious assimilation. Minorities in Iraq have been marginalised for generations and lack the tribal and centralised state security that members of the Kurds, Sunni Arabs and Shia Arabs enjoy as majority ethnic groups. This means that they are significantly more vulnerable to the will of ISIS, particularly following the campaign of terror and chaos that has accompanied the ISIS invasion.

The floor was then handed to Ms Johanna Green of UNPO who discussed the looming humanitarian crisis which is described in the report. Since the invasion of ISIS in June 2014, there have been more than 2.2 million displaced by the violence and persecution – many of whom belong to minority groups. In addition to the violence and persecution that these Internally Displaces Persons (IDPs) face, their search for humanitarian assistance is complicated by the loss of legal documents, dispossession of property and shortfalls in humanitarian resources available. Drawing on interviews she had conducted within Iraq, Ms Green described how IDPs often had no warning of the advance of ISIS and had to flee their homes without crucial identification, proper provisions and sometimes even without family members.

These problems often continued to be a problem once IDPs had reached safe areas from where to receive humanitarian assistance. Iraqi and Kurdish bureaucratic discrimination means that minorities are often left without proper assistance or the humanitarian aid they do receive from the state is second-rate. Poor preparation for winter and heavy rains plus deplorable hygiene conditions thus proved a larger problem for IDPs of minority groups – an issue that was further compounded for women whose privacy and hygiene needs are rarely met. Ms Green closed by reminding those present that all of these issues occur within a humanitarian system that has insufficient funding from the international community and lacks legal provisions within Iraq.

Ms Alison Smith of NPWJ then took the floor giving an indepth analysis of the operations of ISIS within the context of International Criminal Law (ICL) – particularly war crimes, crimes against humanity and genocide. Ms Smith outlined the various violations of ICL that had been committed by ISIS and the contribution that this report and its accompanying field research had made towards gathering evidence on these violations. He further stressed that the report provided evidence to show that 10 of the 16 categories of war crimes identified in ICL had been violated by ISIS in Iraq. These include summary executions, attacking civilians, conscription of child soldiers and incidents of rape. With regards to crimes against humanity, ISIS had committed 10 out of 11 categories provided by ICL. These include murder, enslavement and enforced disappearances. There was also an abundance of evidence to show that ISIS had committed genocide in Northern Iraq from the period of June-August 2014 with high probability that the genocide is still ongoing.  Evidence of forced conversions, mass killings and overt statements by ISIS were claimed to be clear evidence to Ms Smith that a case against ISIS leaders can be built in the future.

William Spencer of IILHR was the final speaker and reiterated a point made by Ms Smith, that there needs to be accountability and redress in Iraq if these IDPs are to feel completely safe. Mr Spencer then outlined the key recommendations of the report. He stressed the need for sufficient funding for the international humanitarian effort in Northern Iraq; currently, only 36% of the funding that the UN has said is required has actually been secured from the international community. With this gap in funding, it is easy to see why the tools and resources needed to effectively deal with the humanitarian crisis on the ground have not made it to the field. Systematic corruption within the Kurdish and Iraqi governance structures has also created a serious issue for the humanitarian mission in the area, and until the governments are willing to make convictions, this problem will persist.

Mr Spencer finished by highlighting the fact that ISIS will not continue for ever and at some point Iraq will need to implement a post-ISIS plan of action. All panel members agreed that the international community, including those in Brussels, need to start formulating this plan now so that when ISIS is defeated, there will not be an uncertain climate in Iraq that can cause further problems for minority groups. In summary, no IDPs will return to their homes without a clear sense that they will be safe and be able to fully rebuild their lives. Following the Brussels launch of the report, which particularly targeted European policymakers and media, a second presentation will take place in Washington DC in mid-March 2015 for an American audience. 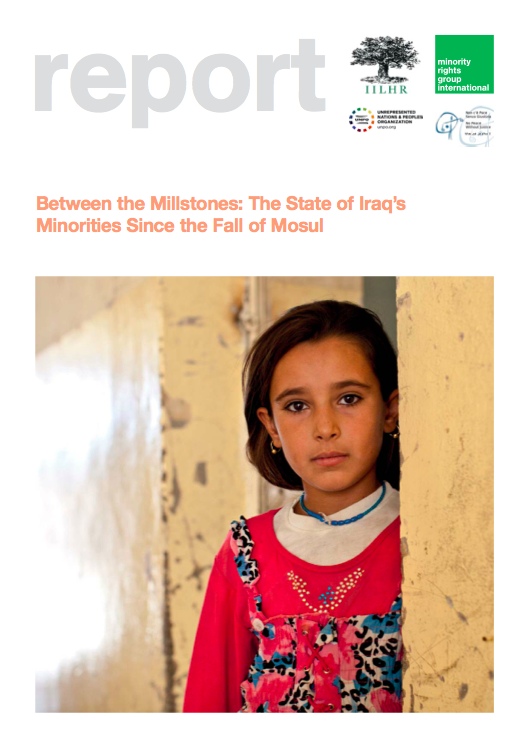 Media coverage of the report: