The conference was also covered by Radio Free Asia

On 25 May 2016, activists and specialists convened in the European Parliament to answer the question “Does China Want Real Ethnic Harmony?” during a conference focused on the unjust imprisonment for life of Professor Ilham Tohti, a renowned Uyghur economist and writer. The conference, organised by the Unrepresented Nations and Peoples Organization (UNPO) in conjunction with the newly founded Ilham Tohti Initiative (ITI), the Society for Threatened Peoples and chinachange.org, further discussed how Ilham Tohti’s story mirrors the plight of the Uyghur People. Tohti’s peaceful approach to the plight of his people has been moderate, dignified and focused on conciliation rather than separation, as was evident in both the speeches dedicated to the man and his life’s work, and in their drive to gain recognition and freedom for Tohti through his candidacy for the European Union’s 2016 Sakharov Prize for Freedom of Thought.

The conference was opened by the hosting MEP, Mr Ilhan Kyuchyuk (ALDE), who, after discussing the parallels between the efforts in Bulgaria to persuade ethnic minorities to work together, gave the floor over to a number of experts on the situation of the Uyghur people and Ilham Tohti himself.

As the first to take the floor, Professor Dru C. Gladney (Pomona College) gave a general overview of the situation in China and in East Turkestan (Xinjang)in particular, where the majority of the Uyghur population is based. He surmised that the problems and instances of conflict between ethnic groups that have become more frequent over the last few years could probably be attributed to the huge influx of Han Chinese to the region – a flow that has not been regulated, but rather encouraged by the Chinese government.

Also picking up on this theory, Dr Vanessa Frangville (ULB) pointed out that over the last two decades the demographic shift in the region, triggered by the net flow of Han Chinese, has increased tensions between the two peoples significantly. According to Dr Frangville, while the first groups were the minority in an Uyghur majority, and thus made an effort to integrate and understand Uyghur culture and traditions, nowadays, however, the balance has shifted, further diminishing the preservation and respect for the Uyghur language and traditions. 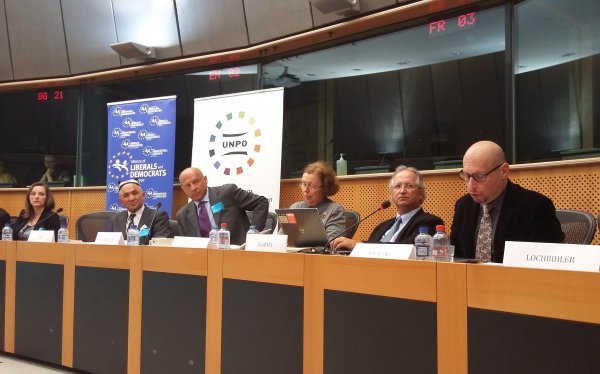 Even more worryingly, as Professor Elliot Sperling cautioned, by demonising the Uyghur’s Islamic faith, this fosters resentment. What’s more, by imprisoning without a fair trial Professor Ilham Tohti, a moderate, liberal and non-violent public critic of the government, the legitimate issues he brings to the surface are ignored, leaving the situation at risk of exploitation from extremists.

The crux of the conference, and indeed the centre-point around which the conference was organised, was a discussion of Ilahm Tohti, and in particular how his work and dedication to building bridges between Han and Uyghurs, as well as to peace and democracy, makes him deserving of recognition. Ms Yaxue Cao put forward her opinion of just how rare it is to find someone like Ilham Tohti; an elite Uyghur with an advanced education and research expertise on his home and people, who speaks fluent Chinese teaching in Beijing, who understands the Han Chinese views and the government approach, while standing firmly in the camp of China’s liberal intellectuals who believe in freedom, democracy and the rule of law.

Ms Marie Holzman pushed this point further, arguing that all of the above points revealed the merit of awarding the Sakharov prize to Tohti. Namely, she said that, as an institution built to support the human rights values it expounds, it must take action to protect these values all around the world and show they are unafraid of China’s reaction. It would be symbolic, she argued, as it would show the EU standing beside the many people in China who have been unjustly accused and imprisoned – not just Tohti himself. 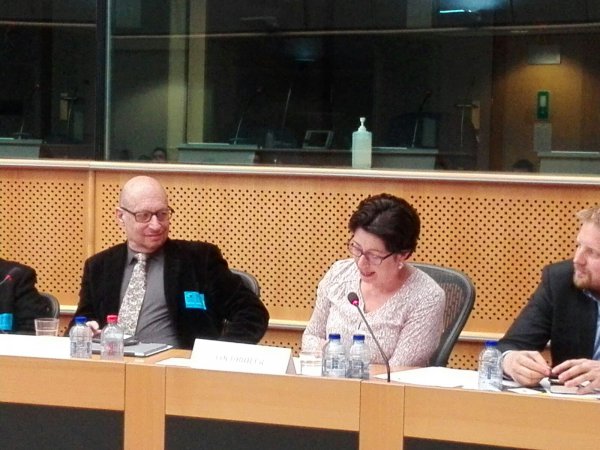 Regarding the Sakharov prize, MEP Ms Barbara Lochbihler joined the conversation at the conclusion of the conference to discuss why she believed it was important to support Tohti’s candidacy. It was not, she pointed out, a question of who is more deserving, as all candidates are undoubtedly so. Rather, it was a matter of supporting a candidacy that we believe will trigger a positive change in the political environment.

The conference was closed after a resolution was read-out, calling on the Chinese government to free Professor Ilham Tohti immediately and unconditionally, investigate the allegations of his mistreatment while detained and to ease repressive policies targeting the Uyghur people. It also called on the European Parliament to strongly commit to the discussion of human rights within China and in particular the plight of the Uyghur people, and to urge the serious consideration of Ilham Tohti for the 2016 Sakharov Prize.

For Further Information see below: