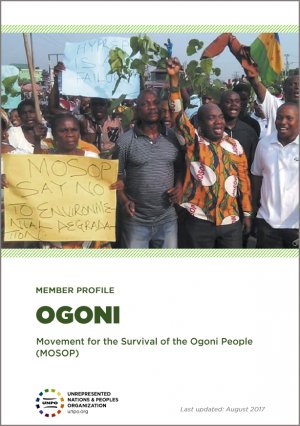 Status: Distinct ethnic nationality within the Federal Republic of Nigeria

The Ogoni are represented at the UNPO by the Movement for the Survival of the Ogoni People (MOSOP). They were admitted as a member on 19 January 1993. MOSOP’s sees its mandate in the protection and promotion of the environmental, socio-economic, developmental, cultural and political rights of the Ogoni people (and other Niger Delta peoples) by non-violent means. MOSOP pioneered the campaign for environmental justice, corporate social responsibility and indigenous rights in Nigeria.

UNPO condemns any kind of exploitation of natural resources which threatens the environment and has a negative impacts on the culture and livelihood systems of local populations. UNPO roundly condemns the destruction caused by Shell’s activities in the area, for instance by the development of canals, roads and pipelines which have infiltrated the streams and creeks of the Niger Delta, and denounces the Nigerian government continually ignoring the Ogonis’ hardships. The exploitation of the region’s hydrocarbon takes place with little to no consultation of the Ogoni community. UNPO supports ILO Convention 169, which aims to protect indigenous communities’ land rights and to prevent political decision-making without the consent of those living in these lands. UNPO works with MOSOP to raise awareness for the need to protect the land rights of the Ogoni and other indigenous communities and supports their efforts to hold accountable those individuals and companies who are responsible for the damage done to the Ogonis’ environment, culture and society. 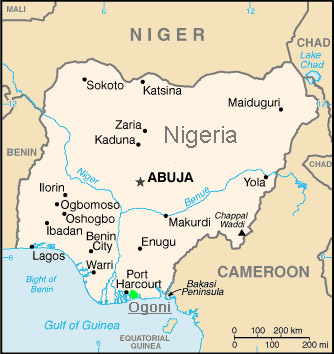 In 1957, Shell Oil Company struck oil in Ogoniland, which set in motion a process that dramatically affected not only Ogoni society, but Nigeria as a whole. What looked set to be an economic opportunity for the country turned out to be more of a bane than a boon. The Niger Delta, a region inhabited primarily by the Ogoni, is the source of oil and gas that account for more than 85 percent of Nigeria’s GDP. Oil and oil-derived products account for more than 90 percent of all the country’s exports (crude petroleum: 77%, $36.9B; petroleum gas, 15%, 7.39B; refined petroleum, 1.3%, 603M). The ruthless exploitation of oil in the Ogonis’ ancestral homeland has catastrophic consequences for their environment, society and livelihood systems This process went largely unnoticed for several decades and drew widespread attention of international media only during the mid-1990s when the infamous regime of Sani Abacha gave the order for the arrest and then execution of famous Nigerian playwright and Ogoni activist, Ken Saro-Wiwa, and eight other Ogoni leaders, after they had publicly named and shamed the Nigerian government and big businesses involved in oil exploitation in Ogoniland.

For more information on the Ogoni, including: