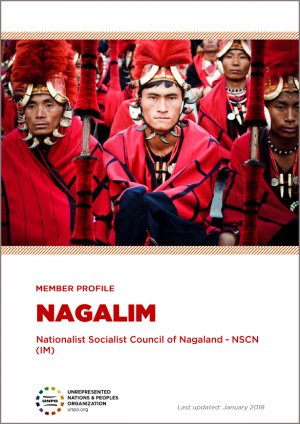 Religions: Christianity, Hinduism, animism and others The Naga are originally from Mongolia, having migrated to the region of Nagalim in the 10th century before Christ (BC). The term Nagalim refers to the entire Naga ancestral domain which was partitioned by the British between India and Burma, now Myanmar. The Nagas' history is one of colonisation, in the 19th century by the British, and then by India, who inherited the territory from the British colonial power. The Nagas' history comprises several periods of peace negotiations with the Indian government, during which the Nagas attempted to exercise their right to self-determination, up until today. The Modi government declared that while negotiations with the NSCN(IM) were ongoing, it would not engage in talks with other groups. In 2015, the parties reached a historical Framework Agreement which “recognises the unique history, the identity, the sovereignty, the territories of the Nagas. It also recognises the legitimate right of the Nagas to the integration of all Naga territories”, according to the NSCN(IM). On 14 August 2017, the latter revealed that the negotiation was close to being completed.

Today, Nagalim is situated between China, India and Myanmar, occupying an area of 120,000 km². The part of Nagaland ruled by India consists of the territory which today is administered by four different administrative units – the states of Assam, Arunachal Pradesh, Manipur and Nagaland. The eastern part of Nagalim, ruled by Myanmar (formerly Burma) has been placed under two administrative units, those of the Kachin state and of Sagaing division. The Nagas form several tribes (55+), mainly established in the North Eastern region of India and north-western Myanmar and accounting for a population of over 4.5 million. They earn their living essentially through agriculture but this primary source of revenue is threatened by a worrying increase of environmental degradation, adding to the severe environmental damage caused by the irresponsible exploitation of the land by the British during colonial times. The region is also rich in mineral resources but negligent practices of extraction of these resources have affected the region’s environment since colonial rule.

An intensive and disorganised exploitation in the mining sector causes the loss of substantial amounts of resources and increases the occurrence of landslides, threatening not only the flora and the fauna, but also the communities in the vicinity of mining sites. Mining promotes intensive deforestation and causes exposed underground rocks and minerals to release toxic gases that cause air pollution, therefore contributing to climate change. Excessive dust from mining also hinders the growth of plants, thus negatively impacting agricultural activities. Communities living near mining sites deal with limited access to drinkable water and water-borne diseases such as cholera tend to spread. Additionally, cultivable lands lose fertility due to the removal of top soil and to the contamination of land and water. Besides, environmental degradation deprives the Nagas from maintaining a sustainable and respectful relation with nature that is characteristic to their culture and traditions. The contamination and increasing shortage of resources in the region therefore represent a violation of the Nagas’ indigenous rights.

Nagalim is represented at UNPO by the National Socialist Council of Nagalim (NSCN(IM)). The NSCN was created in 1980 to strengthen the resistance movement of the Nagas after a delegation of the Naga National Council (NNC) signed an agreement with the Indian government committing to unconditional acceptance of the Constitution of India. The “Shillong Accord” was seen by the National Assembly of the Nagas as a betrayal to their movement and the NSCN stood up against it and gathered worldwide attention for the Naga case. Representatives of the NSCN attended various international meetings, visited numerous countries and, after resisting years of military attacks, engaged in negotiations with India’s central government in the 1990s, representing the interests of the Naga.

On 23 January 1993, the organisation was admitted to UNPO. The NSCN(IM) is still engaged in negotiations with the Indian government, having reached a historic pre-agreement in 2015. In August 2017, the organisation affirmed that the parties were close to a final agreement.