The Rehoboth Basters weere represented within UNPO by the Captains Council, which is the people's traditional leadership body. The Council consists of the Captain, who is elected by the Rehoboth Baster people, and three Council members. The current Captain is Mr. Herbert George Britz. 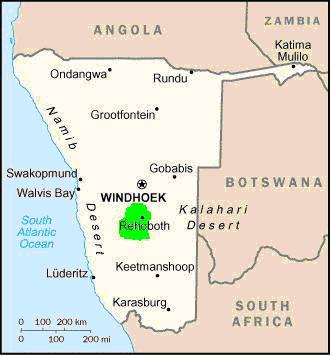 The Rehoboth Basters live in an area in central Namibia of around 14.000 km2. From 1870 to 1990 this area was called Rehoboth and had an autonomous status. Currently it is divided in the Namibian administrative provinces of Hardap and Khomas.

The Rehoboth Basters are the descendants of European Colonists and the Indigenous Khoi-People of Southern Africa. As a consequence of the social and political structures of the times, they were not accepted in white communities. Their Khoi forbearers also kept aloof of them, probably for the reason that they had adopted the culture and language of their white forefathers. Missionaries gather the various clans in and around mission stations where they gave them some education and training in the virtues of Christianity. The derogative attitude, abuse and discrimination from the colonists against them however continued, and eventually they decided to emigrate to South West Africa. A few years after, they reached their destination as they succeeded in buying a large piece of land from the Swartboois with the consent of all the Central and Southern Chieftains of the country.

The Rehoboth Basters are participating in political life through the United People’s Movement (UPM). The UPM was established in 2009 and the movement’s headquarters are in Rehoboth. Since 2010, the UPM is registered at the Namibian Election Commission. In the same year, the UPM won two seats in Rehoboth and one in Okahandja. The objective of the UPM is to unite the Rehoboth Basters and to provide them with a political voice. In December 2014, the UPM has won a seat in the National Assembly of Namibia. The national chairperson, Jan Johannes van Wyk, will represent the UPM in parliament. According to van Wyk, the UPM will concentrate on issues of national concern, such as the provision of land and housing. Besides, he will focus on land issues of the Rehoboth Basters, such as the expropriation of their properties by the Namibian Government and their quest for recognition as an indigenous people under the Paternal Law of 1872.

In 2013, the current Kaptein of the Captains Council, John McNab, expressed his concern over the fate of the Rehoboth Community. The Captains Council is the traditional leadership body of the Basters that consists of a captain and three members. According to McNab, the Rehoboth Basters lost their culture, sacred places and their traditional land after the government of Namibia came into being. He continued that the government refuses to give the Basters the right to self-determination. Their traditional authority is not being recognized anymore, as the government registered Rehoboth as commercial land.

Besides, the Rehoboth Basters still encounter problems with their language, Afrikaans. Although the UNHRC ruled that the prohibition of the Namibian government to use Afrikaans in government communication is in violation with the rights of the Rehoboth community, there is still no improvement in the situation.

The Government of the Union of South Africa in 1915 superseded the German Colonial Government. Right from the beginning of the South African Military Administration, they tried to deny the Basters the right to self-determination. General Botha, however, was adamant that the Basters should keep their rights as exercised under German Administration.

During 1920, South West Africa (Namibia) was granted civil administration. Alienation of land through proclamation and chicanery of law were rife at the time. It is estimated that during periods of German and South African rule 2/3 of our original Basterland had been alienated and today are mostly in private white possession.

During 1923 an international treaty was entered into between the South West African Administration representing the Government of the Union of South Africa, representing the British Empire on the one hand and Captain Cornelius Van Wyk and his council on the other representing the Rehoboth Basters.

This treaty was concluded for the Basters to benefit from section 22 of the Treaty of Versailles 1919. South Africa as mandatory power however never developed the Basters as required by section 22. (The Sacred Trust of Civilization). Instead South Africa started to colonize the country.

On 2nd July 1979 the Basters received Self-Government based on their Paternal Laws by means of an Act of South African Parliament Act 56 of 1976. From 1979 to 1989, Rehoboth developed, grew and prosper on all levels. When the Swapo Government came into being the situation was reversed.

All land that the members of the Baster Community possess was alienated. These assets were registered in the name of the Captain and Council for and on behalf of Rehoboth Baster Community and included building properties, breeding stock and cash. All our sources of income were effectively cut off by this action of Government. No compensation was paid as the Namibian Constitution stipulates in such cases. No other traditional authority suffered such experience.

Rehoboth was further divided in two parts and these parts were added to two larger constituencies namely Khomas and Hardap regions. The delimitation will thus effectively prohibit the Basters from gaining their own representative in Parliament. Their application to be registered as an Traditional Authority was denied seemingly on account of the absence of traditional land.

Rehoboth Traditional Land was confiscated and transferred to the Government of Namibia on the strength of paragraph 1 of schedule 5 of the Constitution of Namibia.

Please find here the report submited by the Rehoboth Basters and here the joint submission with UNPO and the Movement for the SUrvival of the River Races in Zambesia on the occasion of the review of Namibia during the 38th UPR (May 2021).