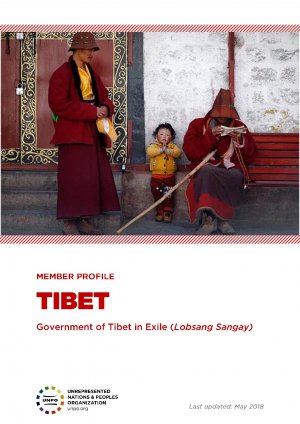 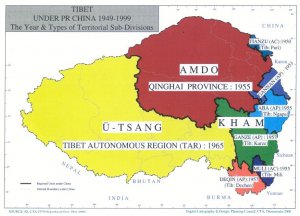 Tibet is situated at the Centre of Asia and borders to China in the East, India, Nepal, Bhutan and Burma in the South and East Turkestan in the North. Tibet is comprised of the three provinces of Amdo – now split by China into the provinces of Qinghai, Gansu and Sichuan -, Kham – largely incorporated into the Chinese provinces of Sichuan, Yunnan and Qinghai -, and U-Tsang. The area covers about 2.5 million square kilometers. The Tibetan Plateau is the source of most of Asia’s major rivers and the surrounding terrain is extremely fertile and rich in forests. The northern plane, Chang-Tang, is largely uninhabitable. Tibet, therefore, commands not only the highest but also the most strategic position in Central Asia.

The Tibet Autonomous Region (TAR) is not seen as the authentic Tibet as it was artificially created by China in 1965 for political reasons. It comprises less than half of the surface of historical Tibet and it merges together the provinces of western Kham and U-Tsang. Tibet has an estimated population of about 6 million Tibetans and 7.5 million Chinese settlers. The estimated population within the TAR is 2.62 million, of which 93% are Tibetans and 6% are Han Chinese, whilst the rest live in the Tibetan areas outside the TAR. Tibet is rich in natural resources such as gold, iron, lead, uranium and huge reserves of forest.

Tibet faces a wide range of human rights issues including the violation of the Tibetan's political rights, environmental degradation, as well as the suppression of freedom of expression and association. Detainees in the region also endure torture and enforced disappearance is widely used as a method to crack down on activists and political dissidents. The the lack of recognition of the Tibetan's minority status also allows for the sinicisation of Tibet. The growth of the population is strictly controled and Tibetans suffer from the violation of their cultural and religious rights. Land grabbing, displacement and resource exploitation are also widespread due to Tibet's attractive natural resources and economic opportunities. The full realisation of child rights is also far from being reached, with numerous children being the victims of discimination, forced labour and the consequences of poverty. Access to health services is limited, making Tibet the worst place to live in China in terms of health. Freedom of religion is harshly restricted, especially since allegiance to the Dalai Lama is interpreted as a threat to the Chinese Communist Party.

For more information on Tibet, including: