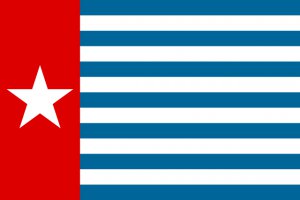 Population: 3.500.000 of which about half are indigenous to West Papua

West Papua is the western part of the island of New Guinea and borders with Papua New Guinea in the East, the Ceram Sea in the West, and the Arafura Sea in the South.

The West Papuans are Melanesians composed of at least of 250 different tribes.

At least 250 different tribes of West Papuans have each their own language and Melanesian culture. Christianity was introduced on 5 February 1855. Animism is still practiced today in rural areas. During the Netherlands colonial rule West Papua had one percent Muslim population. Due to immigration from Indonesia, Islam is gaining more and more prevalence.

West Papua is rich in natural resources: gold, silver, natural gas, copper, timber, etc. The Indonesian government is exploiting these resources, ever since it took over West Papua, while few of the profits are returned to West Papuans.

On 1 May 1963, according the New York Agreement dated 15 August 1962; the Indonesians took control of the territory. After the adoption of the resolution referred to in article I, the Netherlands transferred the administration of the territory to the United Nations Temporary Executive Authority (UNTEA) established by and under the jurisdiction of the Secretary-General upon the arrival of the United Nations Administrator appointed in accordance with article IV. The UNTEA, in turn, transferred the administration to Indonesia in accordance with article XII.

The New York Agreement, article 18d, specified “The eligibility of all adults, male and female, not foreign nationals to participate in the act of self-determination to be carried out in accordance with international practice, who are resident at the time of the signing of the present Agreement, including those residents who departed after 1945 and who returned to the territory to resume residence after the termination of the Netherlands administration.”

Instead, the Act of Free Choice took place.  This was a vote by 1,025 men selected by the Indonesian military in Western New Guinea, who were asked to vote by raising their hands in a display for United Nations observers. The event was noted by the United Nations in General Assembly resolution 2504 (XXIV) without qualification whether it complied with the authorizing New York Agreement, and without qualification whether it was an act of "self-determination" as referred to and described in United Nations General Assembly resolutions 1514 and 1541 (XV) respectively.

The above Act of Free Choice, as organized by Indonesia, was contrary to the “United Nations Charter”, the 1948 Universal Declaration on Human Rights, as well as the United Nations Declaration on the Granting of Independence to Colonial Countries and Peoples (1960), which is fully safeguarding the right of the people of non-self-governing territories both as individuals and as nations. The noble principles upheld in the above documents were violated, as well as the New York Agreement.

The West Papuan People responded with the Unilateral Proclamation of Independence on 1 July 1971 in Markas Victoria, West Papua. This historical event happened four days before West Papuans joined the first democratic general election in Indonesia that was based on one man one vote.

In 1973, West Papua was renamed Irian Jaya by the Indonesians to confuse the public opinion and the international community and to erase the history of West Papua and its people from the globe.

History of the conflict

Since Indonesia took over West Papua from UNTEA on 1 May 1963 West Papuans were tortured and killed by the Indonesian military forces. Because of the Indonesian intimidation methods the Papuan leaders and the youth were forced to form a liberation movement to protect the identity and dignity of the indigenous Melanesians in West Papua along with their history.

West Papua has fulfilled the conditions to form a state.

The right of self-determination, the country’s independence, and its international recognition are the things that the National Government of the Republic of West Papua and its people are seeking.

By continuing the occupation of West Papua, Indonesia is against the spirit and the letter of its constitution, which in the first and second lines of its preamble states, “Whereas independence is the inalienable right of all nations, therefore, all colonialism must be abolished in this world as it is not in conformity with humanity and justice”.

West Papuan men and women organized in a guerilla movement (OPM as Umbrella Organization), are presently resisting the Indonesian Army. Ten thousand people had to flee to Papua New Guinea (PNG) in 1984 and many are still living in refugee camps along the border with PNG. Even in those camps the refugees cannot be sure of their safety. The Indonesian Army was reported to have crossed the border of PNG many times.

The Indonesian population transfer programs constitute a severe and direct threat to the survival of the indigenous peoples of West Papua. Indonesians were forced to be relocated and transferred from densely populated islands in Indonesia to the so-called outer island (West Papua). The influx of sponsored and of so-called spontaneous migrants threatens to create a situation in which the Indonesian settlers outnumber the indigenous populations, taking their places in the economic and social sectors.

During the last 50 years, vast areas of West Papua have been granted as concessions to multinational, transnational and Indonesian mining, oil and illegal logging companies without consultation and compensation to Papuan landowners or approval by the indigenous peoples who have inherited these lands from their ancestors who held them for 40,000 years. Many indigenous communities who have little contact with industrialization or large-scale commercial activity have been forcibly removed from their ancestral lands or made to leave through intimidation and bribery to make way for the exploitation of natural resources.

Moreover, the operations of the mining companies, particularly PT Freeport Indonesia/PT-FI (Freeport Ltd Co.) in West Papua, have caused enormous tension, which has often led to wars between the tribes in the area.

The lands of the Amungme, for instance, have been mined for gold and copper since 1967 by a subsidiary of the US based Freeport McMoran Copper & Gold. Throughout the years the Amungme people have conducted a non-violent fight against the company. In April 1995, the Australian Council for Overseas Aid produced a report denouncing the killing of 37 West Papuans by the Indonesian army while they were demonstrating peacefully.

Please find here a submission made to the United Nations by UNPO regarding West Papua.