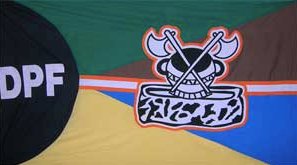 The Vhavenda are an indigenous people who live in what is today the Limpopo Province of South Africa. Having migrated to the area during the Bantu expansion as early as the ninth century, the Venda-speaking community now constitutes approximately 12 percent of the region’s population.

From the 18th century onwards, the presence of other peoples, specifically Europeans, directly threatened the traditional and ancestral legacy of the Vhavenda people.  Much of their land was seized through a series of violent confrontations and transformed into land for farming. European colonisers replaced traditional local authorities in the area with white governors.

During the apartheid regime, their ancestral regions were designated as Bantustan. These “homelands” were areas to which the majority of the black population was moved to prevent them from living in the urban areas of South Africa, thereby further contributing to their isolation and denying them protection by the law and any rights the white population had in apartheid South Africa.

During their UNPO membership, the Dabalorivhuwa Patriotic Front, as a representative of the Vhavenda people, advocated for an end to discriminatory practices and remnants of the apartheid era. For instance, they raised awareness about the non-protection of sacred sites of the Vhavenda remain and the exploitation of holy forests by the government without any form of consultation with the Vhavenda people.