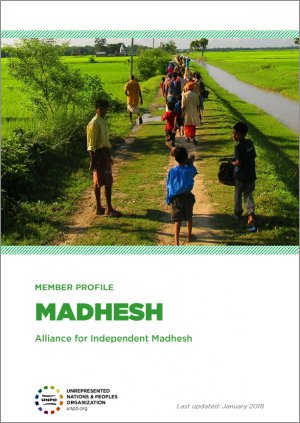 Area: 23,068 km2 constituting the Terai region in the south of Nepal

The Madheshi are the inhabitants of the Terai region in the south of Nepal at the foothill of the Himalayas on the border to India. The region distinguishes itself from the rest of the country by its plain terrain with subtropical climate, in contrast to the high mountain lands inhabited by the hill people of Nepal (Miklian, 2008).

The region is inhabited by 50.3% of Nepal’s total population (National Population and Housing Census 2011) of different ethnicities, many of which share cultural, linguistic and social similarities with Northern Indians rather than with Nepalis. Those ethnic groups speaking Maithili, Bajjika, Bhojpuri, Awadhi or closely related dialects mainly refer to themselves as the Madheshi people and make up the majority of the region’s population. The Terai is home to several indigenous groups that lived in the region long before it became an agricultural center and attracted migrants from the mountain region, Pahadis, that now make up almost a third of the Madheshi population. 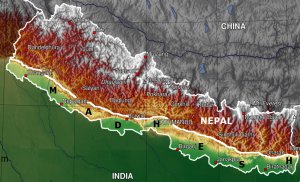 However, groups indigenous to Madhesh still make up large parts of the population of the Terai, for example the percentage of the Madheshis in the provincial assembly of Province 2 (possibly to be renamed as “Madhesh”) is still 87% (Hachhethu, 2016). The largest indigenous group are the Tharus who make up 12.5% of the Terai population (National Population and Housing Census 2011). Hindi is the lingua franca of the region, and it is the language that was traditionally used in both administration and education prior to forceful imposition of Nepali language in 1950s.

The Terai region was given to Nepal by the East India Company in two parts, Eastern Terai in 1816 and Western Terai in 1860. Ever since the region has faced discrimination by the Nepalese government and there has been an increased call for more autonomy in the Terai. It has historically been seen as a distinct region for centuries and distances itself from Nepal in many ways.  The region has fought against injustice by the Nepali government and fought for the rights of its inhabitants as Nepali citizens. 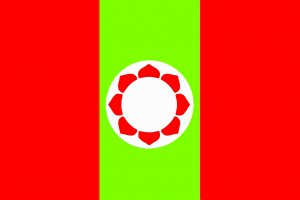 The Alliance for Independent Madhesh has been a Member of UNPO since 2017. It represents the inhabitants of the Terai region internationally.

The Alliance for Independent Madhesh (AIM) promotes the rights of all Madheshis and is inclusive of all inhabitants of the Terai. It protests the governmental oppression of the people of Madhesh and claims the peoples’ rights to self-determination and freedom of expression. The AIM intends to end discrimination of the Madheshis and condemns the use of violence to suppress fundamental rights.

After falling under Nepalese rule, the colonisation of the Madhesh continued, with the dissolution of their army and prohibition from joining the Nepalese army or being employed at public and civil service jobs. The Nepalese government established several army checkpoints throughout the region and seized larg parts of land that belonged to the indigenous population and promoted their migration to gain control of the region, forcibly displacing indigenous peoples. Moreover, sometimes the indigenous population were forced to work under slave-like conditions in the very land they once owned, for which they were never properly compensated.

The strict "ek desh, ek bhesh, ek bhasa" (one country, one dress, one language) policy imposed by the Nepalese government in the 1950s further oppressed marginalized ethnicities and led to the lack of education and jobs in local languages. Also, the division of Nepal into five development regions that forces hill an plain areas into a common area as well as the unproportional representation of the different ehnicities in the parliament restrict the Madheshis' autonomy and political influence.

Furthermore, although the Madhesh region is responsible for 60% of Nepal's agricultural production, the region is systematically underprivileged and does not benefit from its own advantages, while it is has additionally been subjected to different laws and taxations than the rest of the country. The Madhesh also face lack of freedom of expression and have endured several cases of arbitrary arrests and extrajudicial killings.

Due to the reasons stated above, the Madhesh is still underdeloped compared to the rest of Nepal, presenting the lowest human development index and levels of health care and education, while the rate of unemployment, illiteracy and child mortality are considerably high.