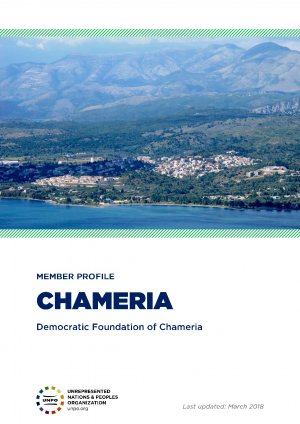 Population: no reliable figures (no official data exists for ethnicity in Greece) but best estimate for people who speak the language and/or have an Arvanite consciousness is 200,000

Language: Arvanitika (dialect of the Albanian language) and Greek

Chameria is a centuries-old inhabited territory once frequented by the Cham people, an Albanian-speaking ethnocultural group, sometimes also referred to as Arvanites. The majority of the land was incorporated into to the Greek State by the Conference of the Ambassadors in London in 1913, without the consultation or agreement of the Chams and with a small section of the land becoming part of the newly formed country of Albania

Cham people today are seeking the right to return to Chameria by being granted Greek citizenship, whilst keeping citizenship of the countries in which they currently reside. They are also calling for the recognition of their status as a minority group. The restoration of their right to property is another main concern of the Chams, as Muslim Chams have seen this alienated by the Greek government since the early 20th century, following the signing of the Turkish-Greek peace agreement and the 1923 population exchange between the two nations. Muslim Chams, in particular, have been persecuted by the Greek government from this period onwards, being expelled from Greece following World War II (WWII).

The Cham people have a unique language, culture, tradition and ethnicity that distinguishes them from the Greeks. Yet their language, Arvanitika, has no legal status in Greece and is not taught at any level of the educational system.

Furthermore, any land or property owned by the Chams before WWII became the property of the Greek state and was redistributed to Greek citizens. The restoration of both citizenship and property rights is an aim of the DFC.

The Orthodox Chams, who were allowed to remain as citizens in Greece, have been subject to assimilationist policies by the Greek State in order to dilute Cham culture within Greece. This has led to a deterioration of culture and most notably the traditional language spoken by the Cham people, as this language is forbidden or discouraged within most cities and institutions.