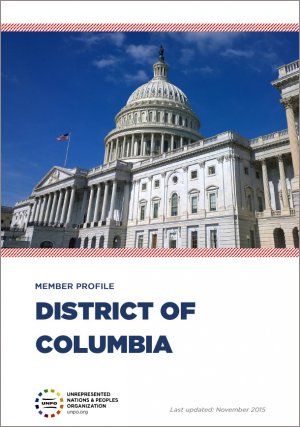 Area of the federal district: 177km²

Ethnic Groups: According to the United States Census Bureau in 2010, the population distribution was 50.7% African American, 38.5% Caucasian, 9.1% Hispanic (of any race), 4.4% other (including Native Americans, Alaskans, Hawaiians, and Pacific Islanders), 3.5% Asian, and 1.6% mixed. Population demographics have not seen a change in the 2014-2015 period.

The District of Columbia is represented at UNPO by the D.C. Statehood Congressional Delegation, in conjunction with the New Columbia Statehood Commission. They were admitted to the organization on 7 November 2015.

The Statehood Congressional Delegation is popularly elected, and operates independently within the government of the District of Columbia. Three members of the Delegation serve on the New Columbia Statehood Commission, which includes the Mayor, the head of the executive branch, and the Chairman of the Council, the head of the legislative branch of the District government. The Commission focuses on local governmental efforts.

The popularly elected D.C. Statehood Congressional Delegation, in conjunction with the New Columbia Statehood Commission (an entity of the District of Columbia government) defines the District of Columbia as an unrepresented territory of the United States. D.C. residents contribute to their District by paying taxes, but lack full representation in Congress. The District seeks full citizenship rights, such as formal voting representation in Congress and equal political rights through the establishment of the 51st State, New Columbia. 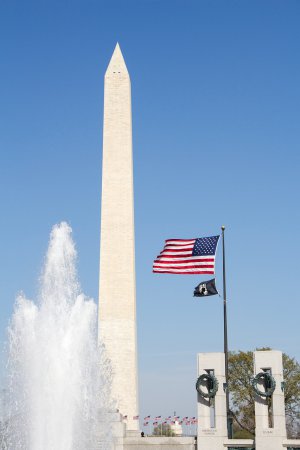 The District of Columbia represents over 658,000 disenfranchised citizens of the United States: although DC residents have been electing their Senators and Representatives every two years since 1990, these so called Shadow Senators are not allowed to vote on legislation or debate on the floor of the Senate. Their legislative roles are very limited and consist mainly of placement of written statements in the official record of proceedings or presenting testimony to selected committees, such as the Homeland Security and Government Affairs Committee in the Senate.

In some specific cases, Congress has used its power over D.C. to abolish important life-saving public health programs, and repeal and weaken firearm safety laws. The lack of votes on budget issues means that D.C. does not get adequate resources to spend on its needs.

A poll conducted between 12-15 November 2015 by The Washington Post found that 67 percent of D.C. residents favor the District becoming a state, including 71 percent of registered voters, an increase of 10 percentage points from 2010. Moreover, nearly 3 in 4 residents said they were upset that the District has no voting representation in Congress, and about half described themselves as “very upset” over the absence.

To raise awareness of its minimal political rights and desire for full voting representation, D.C. created the Taxation Without Representation flag and license plates. D.C.’s current plan envisions a divide between the federal center of Washington from the Districts’ residential and non-governmental areas, the latter that would become the 51st State under the name of New Columbia. This two-jurisdiction solution requires the approval of Congress.

For more information on the District of Columbia, including: