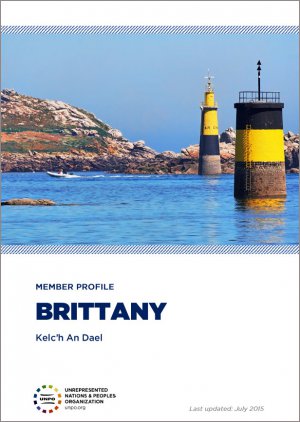 Brittany is represented at the UNPO by Kelc’h An Dael. This association was admitted to the UNPO as a member on 1 July 2015.

Brittany is an administrative region in north-west France. Historically, Brittany’s territory was composed of both the current region of Brittany and the current department of Loire-Atlantique. This territory lost its independence at the end of the 15th century and was integrated to France during the 19th century. Since then, the Bretons have faced the progressive loss of their language and culture. KAD aims to recover a certain form of autonomy through the recreation of a Parliament of Brittany, and to preserve the linguistic and cultural feautures of Brittany, encouraging their usage and their study.

The KAD (Kelc’h An Dael, meaning Circle of the Parliament) aims to recreate the Parliament of Brittany through Breton national elections. The organization is open to all patriot and democrat Bretons, whatever their political preferences.

The KAD will organize these elections in November 2016, after which it hopes to form a Breton Council of State.

The immediate goals of KAD are: 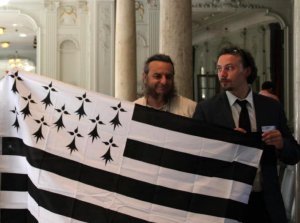 In November 2014, the French National Assembly passed a new law on the territorial organization of the French départements. Brittany is one of this law’s “victims“, as its provisions confirm the division of the region, rejecting the return of the historical capital city Nantes and the rest of the territory of Loire-Atlantique to within its borders.

France did not sign nor ratify the European Framework Convention for the Protection of National Minorities. Bretons and other minorities are not legally recognized as existent in France.

Another issue is the Breton language. Due to the fact that the study of French is now mandatory in schools, the number of people speaking the Breton language is constantly decreasing. The language annually loses around 10,000 speakers, and the majority of fluent speakers today are aged 70 or over. This serious decline means that the language is in danger of extinction. France has not yet ratified the European Charter for Regional or Minority Languages. This means that not only Breton, but all regional and minority languages in France, are currently endangered.

For more information on Brittany, including:

Kelc'h An Dael took part in the 10th session of the Forum on Minority Issues. For more information, you can read this press release (in French).

A monument honouring all Bretons who died in conflicts involving France will be inaugurated in Saint-Aubin-du-Cormier on 11 November 2018. For more information, you can read this press release (in French).

Kelc'h An Dael and Dael Breizh have published an opinion piece reaffirming their demands for the future of Brittany (in French).

French county councillors have refused to hold a consultation on the reunification of Brittany on Monday 17 December 2018. Read more about this here (in French).