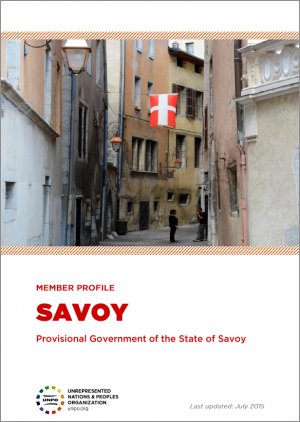 UNPO REPRESENTATION: The Provisional Government of the State of Savoy

Savoy is represented at UNPO by the Provisional Government of the State of Savoy. They were admitted to UNPO as a Member on 29 June 2014.

Covering roughly the Western Alps region, between Lake Geneva in the north and Dauphiné in the west, Savoy is a mountainous territory with altitudes ranging from 200 to over 4,800 meters. A key passage through the Alps, Savoy has always been coveted by its European neighbors.

Savoy was an independent and self-governed territory from the 11th century until 1860, when it was annexed to France. Today, Savosian people are a minority in their own territory and their claims are not taken into account by the Government of the French Republic.

The nickname "Savoyard" was given by the French in the middle of the XIXth century to denigrate Savosians. It became the name given to the inhabitants of the department of Savoy. However until 1960, it was used as an insult, meaning a boorish person.

The Provisional Government of the State of Savoy would like the claims of the Savosian people to be taken into account by the Government of the French Republic and by European Member States. The Provisional Government’s core mission is to raise international awareness of the cause of its people. On 18 September 2013, it declared its will to ratify the Vienna conventions of 1961 and 1963, along with the 1969 Convention of Geneva. Additionally, it has also declared its will to sign the 1945 United Nations Charter and to recognise the competence of the International Criminal Court for all international affairs that might implicate the people of Savoy. Furthermore, the Provisional Government of the State of Savoy considers improving its Constitution and empowering itself with relevant tools in order to become a model State in Europe.

Since the annexation of the Duchy of Savoy by France, the Savosians have become a minority on their own territory. Currently, Savoy consists of two French departments, namely Savoie and Haute Savoie. According to a survey conducted in 2000, between 41% and 55% of the population were in favor of the proposal for a separate Savoy region.

For more information on Savoy, including: