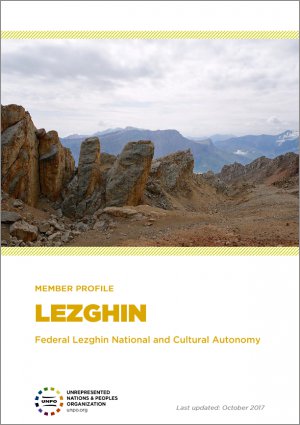 Areas: Republic of Dagestan (Russia), predominately in the southern part and North-East Azerbaijan

Religion: Predominately Sunni Muslims with a Shi’a minority living in the village of Miskindjia, Dagestan 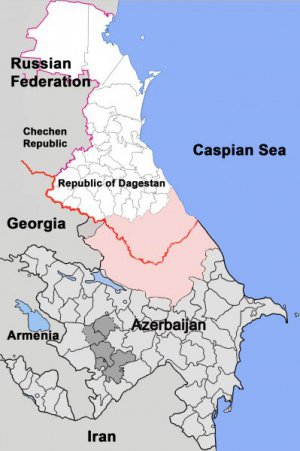 At present, the division of the Lezghin minority between two different political, cultural and religious systems has resulted in the deterioration of their living conditions.  Lezghins’ main struggle is their lack of legal status, preventing them from securing their rights as a distinct historical community and Nation in the territory of their traditional residence. Azerbaijan is persistently pursuing an assimilation policy, erasing thus ethnic differences and turning the country into a mono-ethnic state. As a result, Lezghins cultural and historical identity is in danger and their socio-economic situation is deteriorating.

UNPO is deeply concerned by the situation of the Lezghin minorities in Azerbaijan and Southern Dagestan.

The Lezghins in Dagestan face greater discrimination in job markets in a region that suffers already from high level of unemployment, corruption and the complex clan system. The lack of official quotas for positions in public offices excludes Lezghin representatives from holding any major administrative and political posts in Dagestan. Besides, Lezghin language status is not de jure recognised, which limits the use of Lezghin mainly to family spheres. Although it is a language of instruction, manuals and teaching materials are becoming scarcer. Young Lezghins are losing motivation to learn their native language since its usefulness is constrained.

Shortly after Ramazan Abdulatipov came to power in 2013, interethnic relations began to worsen in Dagestan. Abdulatipov has imposed an Avar-centric version of the history of the region to all ethnic minorities living in multinational Dagestan. Lezghin politicians have been ousted from power, thus isolating Lezghins from political life. Ramazan Abdulatipov perpetuates an ethnic discrimination policy towards the Lezghin community that was already in place under Abdurahman Daniyalov, the former head of the Soviet Republic of Dagestan. Abdulatipov considers himself as Daniyalov’s disciple and follower. And this does not augur well for Lezghins.

The situation of the Lezghins in Azerbaijan differs substantially from that of the Lezghin living in Dagestan. Lezghins are concerned about their absence in the country’s political life. They are associated with direct and indirect assimilation policies initiated or supported by the Azerbaijani authorities. Many Lezghin historical and religious monuments are being renamed with Azeri words. Azeri authorities continue to close Sunni mosques and allocate them to Shi’a communities. The Lezghins are also rarely mentioned in official Azerbaijani history. In general, the process of linguistic assimilation is much more intensive than in Russia and is accompanied by a change of ethnic identity. The status of the Lezghin minority as well as its language is not clearly stated in the law. This contributes to the impoverishment of the Lezghin culture and to the disappearance of the rich oral tradition.

Furthermore, Lezghins are not effectively represented in local, regional or national governments and official data on the ethnic population has been purposely lowered. Baku’s assimilation policies have forced many Lezghins to leave their Lezghin identity. Azerbaijani authorities are creating a mono-ethnic State. Officially more than half of the Lezghins who have pursued an education in Azerbaijan are registered as Azerbaijanis. There is no possibility for Lezghins to express their ethnic identity, be it through culture, politics or business. Many Lezghin activists are obliged to leave the country not to face repression and imprisonment. Many of them are political prisoners.

UNPO has a resolute commitment to the peaceful and nonviolent campaign for the recognition of the Lezghin people as an ethnic group with a legal status, their language and political rights and the restoration of their inalienable rights as a distinct historical community and Nation in the territory of their traditional residence. UNPO believes that the Russian Federation and Azerbaijan should proceed towards the full restoration of the rights of the Lezghins in accordance with the universally-recognised principles of international law and in dialogue with the Lezghin community representatives. UNPO promotes the engagement of the international and particularly European communities to support the process of restoring the rights of the Lezghins.

For more information on the Lezghins including: