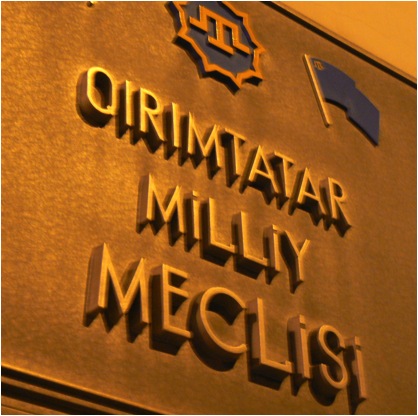 To view statement either read below or click here:

The denomination of the Crimean Tatars' Mejlis and its Kurultai as ‘organized criminal groups’ and their activities as ‘unconstitutional’ is “completely unfounded and based on ignorance regarding the activities of Crimean Tatar political activists – something that flies in the face of decades of nonviolent activism in support of democracy and pluralism”, Mr. Busdachin said.

Mr. Mustafa Jemilev, Chairman of the Crimean Tatar Mejlis and Soviet prisoner for fifteen years, is the most prominent of many Crimean Tatar activists. He is well known for his expressly non-violent campaigning for restoring the rights of Crimean Tatars. “He is an inspiration to hundreds of thousands of Tatars – his selfless struggle, carried out to the full face of Soviet authority, marks him out as a Gandhi of the Crimean Tatar people”, Mr. Busdachin emphasised.

To this day, Crimean Tatars are lacking a law offering protection and collective representation. “A real dialogue between Crimean Tatars and Ukraine authorities has to be started in order to recognise the rights of Crimean Tatars within Ukraine. In that sense, statements like the ones give on 5 April 2010 by Oleg Rodivilov (Leader of Crimea's Russian bloc) are not only counterproductive, but dangerous for future Crimean Tatar – Ukraine relations”, Mr. Busdachin added.

Note:
The Crimean Tatars, represented by the Milli Mejlis, co-foundered the UNPO in 1991. UNPO actively supports the struggle of Crimean Tatar people through lobbying of the European Union, the Ukrainian government and the promotion of Mr. Jemilev as a Nobel Peace Prize nominee.

The Crimean Tatar people ‐ brutally deported by Stalin's regime in 1944 and kept in exile until the collapse of the Soviet Union ‐ are still trying to overcome political and cultural marginalisation by many state actors of independent Ukraine.