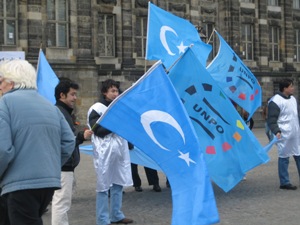 On August 7th 2009, there will be a protest in Geneva to demand that China be held accountable for the Uyghurs  situation in the Xinjiang Uyghur autonomous Region (East Turkestan)
PRESS RELEASE  FOR IMMEDIATE RELEASE

PROTESTORS CALL FOR CHINA TO END DISCRIMINATION AND VIOLENCE TOWARDS

Several hundred people will gather outside the United Nations in Geneva on August 7th 2009 to demand that China be held accountable for the longstanding cruel and inhumane treatment of Uyghurs in the Xinjiang Uyghur Autonomous Region (East Turkestan).

In June and July Chinese authorities undertook brutal crackdowns in towns throughout the region following peaceful demonstrations that called for an inquest into the violent killings of Uyghur workers at a toy factory.
Today, over one month since that attack, thousandsUyghurs remain incarcerated without having faced trial, around 1000 have been killed and many thousands injured. Crucially Chinese official figures claim that fewer than 200 people were killed, the majority of whom were of Han Chinese ethnicity.

The demonstration has been organized by the WORLD UYGHUR CONGRESS (WUC) and the UNREPRESENTED NATIONS AND PEOPLES ORGANIZATION (UNPO), and supported by the SOCIETY FOR THREATENED PEOPLES.

Protestors will call on the Chinese government to CEASE THE BRUTAL
CRACKDOWN on the peaceful Uyghur protesters and to RELEASE THOSE ARRESTED WITHOUT TRIAL. They will urge China to ENGAGE IN COLLABORATIVE AND PEACEFUL DIALOGUE with the Uyghur people.

The demonstration will start at the PALAIS DE WILSON AT 13H00 and progress to the PLACE DES NATIONS. At the Place des Nations, speeches will be delivered at 15h30. Speakers will provide truthful details of the events
that took place that have been relayed to them through friends and family
remaining in Xinjiang.

FURTHER DETAILS OF THE DEMONSTRATION CAN BE FOUND ON UNPO Website AND  DOWLOAD THE PDF VERSION OF THIS PRESS RELEASE.