Turn The Heat Up On Shell 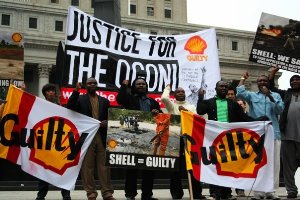 On what was supposed to mark the start of the Wiwa v. Royal Dutch Shell trial in New York City, over a hundred people showed up in front of the courthouse to bring attention to this historic case.  The trial opening has been postponed another week, but this did not damper the spirit of those present.

The Turn The Heat Up On Shell rally, hosted by the Shell Guilty Coalition, drew supporters from far and wide and will reach an even further audience through the sizable press turnout.  In addition to speakers from Remember Saro-Wiwa, Oil Change International, Friends of the Earth, and Amnesty International, Ogoni natives who now reside across the U.S. joined the crowd of campaigners to deliver their personal messages of struggle and their hopes for this trial.

Speaking with Ledee, an Ogoni who has been living in the U.S. for the past ten years, about the events of the day he stated, “The spirit of those who have died is here with us today—you can feel it.”

There was a sense of enormity in the historical relevance of this trial and the precedent it is setting.  Speaking in front of the ‘Triumph of the Spirit’ sculpture, a monument honoring the African-American colonial experience, it was clear that the mere fact that the victims will see their day in court is a triumph.

“Shell is the driving force of our government,” Ledee says, “and they don’t care about us. We need to hold them accountable.”

Other oil giants have come under similar fire for their abuse of the environment and those who depend on it for survival.  An Ecuadorian man who passed by the rally stopped to express his solidarity with the Ogoni persecuted under Shell’s operations.  Ecuador is similarly entrenched in decades long legal battles with Chevron who took over Texaco’s operations in the area.  The case did not hold up in U.S. courts under the same statute as the Wiwa trial, but Ecuadorians are optimistic about the upcoming trials taking place in Ecuadorian national courts.

The cases against Chevron/Texaco, Royal Dutch Shell (Shell), and the Unocal case (settled out of court in 2004), are making the necessary headway towards corporate responsibility. For indigenous groups affected by corporate violators, the Wiwa case will set the bar for similar cases brought to trial in the U.S.


Check back here for more updates! Please share this article and help spread the word!

To learn more about the Ogoni, please read Andrew Swan’s “Curse of the Black Gold” .

To stay updated on the trial schedule and to learn what you can do to spread the word, please visit the Wiwa v Shell Campaign official webpage .