Alongside the 10th session of the UN Human Rights Council (HRC), UNPO and Interfaith International organized a briefing on the deteriorating human rights situation in Pakistani Balochistan. 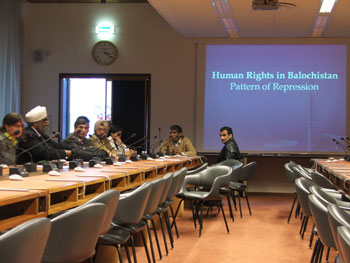 As part of the efforts to highlight the deteriorating human rights situation in Pakistani controlled Balochistan, Interfaith International, in cooperation with UNPO, organized an interactive debate alongside the 10th session of the UN Human Rights Council (HRC).

Dr. Charles Graves, Director of Interfaith International, opened the meeting by giving a brief account of where the Baloch people are located, who these peoples are and then in further detail outlines the conflict that Pakistani controlled Balochistan has with the Pakistani government. Dr. Graves also outlined the economic repression of the Baloch community and particularly the lack of revenues that the Baloch community gets from the natural resources which are extracted from their territory.

It was Senator Sanaullah Baloch who provided the attendees with a detailed account of the history of Balochistan, which is seen as the source of the conflict with the government of Pakistan. Furthermore, Senator Baloch highlighted various areas in which the human rights of the Baloch are blatantly ignored, including a number of civil and political rights, as well as Social, Economic and Cultural rights.

Detailed statistics evidently supported claims of ongoing repression of the Baloch community and showed a pattern of systematic underdevelopment of the region, particularly in the fields of education.

UNPO United Nations Coordinator, Ms. Agnes Venema, briefly highlighted the international obligations of Pakistan as a signatory to several international treaties. Though highlighting the efforts made by the new government of Pakistan, which recently signed onto the International Covenant on Civil and Political Rights, as well as the Convention Against Torture and Other Cruel, Inhumane or Degrading Treatment or Punishment, she highlighted that signing a document does not yet constitute ratification, which can take up to years. Furthermore, Ms. Venema expressed skepticism in terms of those who are allegedly responsible for human rights violations being brought to justice. A culture of impunity prevails in Pakistan and even publicly committing oneself to international instruments put in place to protect the human rights of all cannot guarantee that those rights are being implemented as long as such a culture of impunity is being sustained.

Mr. Mehram Baluch, being one of the first Baloch to come to the United Nations in 2001 to highlight the Baloch plight, was proud to be able to speak at the event, despite intimidation suffered at the hands of the Pakistani government. He gave detailed account of how far the Baloch have come in the past decade and welcomed the fact that so many had come to attend an event which aimed at providing more information on the current and ever deteriorating situation of the Baloch in Pakistan. 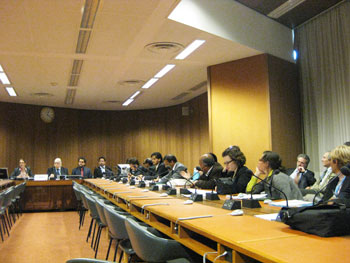 Not only members of the Baloch community took the floor. Mr. Peter Stania, Director of the International Institute for Peace in Vienna also took the opportunity to speak at the event. He echoed some of the remarks made before and emphasized that peaceful means are to be deployed in order to overcome the violations suffered in Pakistan.

Hon. Mario Silva, Member of the Canadian Parliament and shadow foreign affairs critic also took up some moments to highlight the fact that the West cannot ignore this issue and that immediate action is needed.

Furthermore, the Honorable Paulo Casaca, Portuguese Member of the European Parliament for the Socialist Group had also taken the time to comment on the human rights situation of the Balcoh. Being the Vice-chair of the South Asia Peace Forum, he emphasized the efforts that have been taken to look for a sustainable resolution to this conflict. He added, however, that the highest right in his opinion was the right to an identity, including the right to a language and a culture.

UNPO Representative for Balochistan, Mr. Noordin Mengal, gave testimony of the repeated military operations that have been launched by the Pakistani government in Balochistan. He added that the government and the army of Pakistan could kill the Baloch, but that they will not be able to kill the ideas of a people.

As a painful reminder of the harsh conditions that the Baloch live under on a daily basis, Mr. Munir Mengal, gave a detailed record of the conditions of him enforced disappearance. After launching a Baloch tv chanel, Mr. Mengal was detained at the hands of the Pakistani military and tortured. Throughout his detailed account, he emphasized the repressive nature of the Pakistani military towards to Baloch. Mr. Mengal was fortunately released after which his testimony was recorded by the International Committee for the Red Cross, though he will remain scared for life.

On behalf of the Office of the High Commissioner for Human Rights (OHCHR), Mr. Neil Gilmore, temporary Pakistan desk officer, gave an account of the activities of the OHCHR in relation to Balochistan. He recalled the letters of allegation that the Working Group on Enforced Disappearances had send to Pakistan and the fact that this information had also be relayed to the Human Right Council in its latest report. Furthermore, he highlighted the joint efforts of a number of Special Procedures Mandate Holders who had prepared communications and letters of allegation which attempted at retrieving the truth about these alleged victims of human rights abuses at the hands of the Pakistani regime. Furthermore, Mr. Gilmore agreed to accept a memorandum on behalf of the Unrepresented Nations and Peoples Organization (UNPO), Interfaith International, Baloch Human Rights Council and the Sindhi Baloch Forum calling for increased international pressure on Pakistan to improve the human rights situation in Balochistan.

Before closure of the meeting, Mr. Mehram Baluch once more reiterated the appeal that UNPO on behalf of its Baloch members has published. He pleaded for the safe return of UNHCR employee Mr. John Solecki who had been abducted by, what Mr. Baluch called “foolish Baloch who saw no other way out”. He appealed directly to them, stating that the UN is listening. Proof of this is the fact that the meeting was attended by numerous UN members of staff. Mr. Baluch appealed for his safe return and pleaded against such acts of utter desperation. The appeal publically welcomed by the representatives of the UNHCR, who pledged to forward the message to the Secretariat. 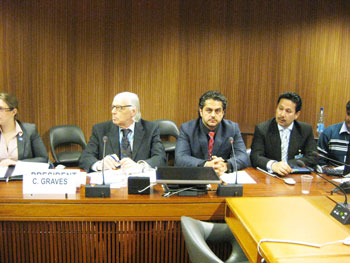