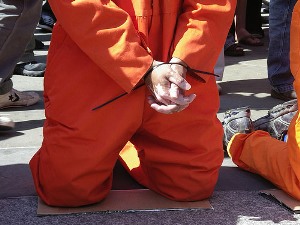 Munich, Germany’s third largest city is prepared to take in 17 Uyghurs held in US terrorist prison Guantanamo Bay for seven years, although they were cleared of any wrongdoing.
Below is an article published by: The Local

The German city of Munich, best known for Bayern Munich, lederhosen and the Oktoberfest beer festival, is also home to the world's largest community of Uighurs, an ethnic minority from China's extreme west.

And the southern city, Germany's third largest, is also the first city in the world to say it is prepared to take in 17 Uighurs held in US terrorist prison Guantanamo Bay for seven years, although they were cleared of any wrongdoing.

The city council passed a resolution in February [2009] in favour of accepting the 17 because human rights groups believe they face torture if they return to China, where authorities regard them as "Chinese terrorists."

The Uighurs - members of a Muslim, Turkic-speaking minority from Xinjiang in the far West of China -- were captured in Afghanistan but have since been cleared by Washington. The detainees have become something of a diplomatic headache as the US refuses to hand them over to China.

By agreeing to accept the group, Munich intends to send an "early signal" to the German government, in case US President Barack Obama asks Germany to take them in, according to the city's Social Democrat mayor, Christian Ude.

Asgar Can, vice-president of the World Uighur Congress, told AFP the Uighurs have a good chance of being accepted in Munich when the infamous Guantanamo Bay prison closes, which Obama has pledged to do by early 2010.

"Our community is very well integrated. That's our trump card when it comes to taking in the Guanatanamo Uighurs," he said.

Speaking in his office near Munich train station, close to the "Taklamakan" fast food restaurant specialising in Uighur noodles, Asgar Can explained: "the Uighur community here is the biggest in the world."

"There are a lot of Uighurs in the US but not concentrated in one town," he said, adding that 500 of Germany's 600 Uighurs call Munich home.

Human rights groups, as well as certain politicians, have also called for the Uighurs to be accepted in Germany.
"It's a humanitarian duty to allow these people to live freely," said Christoph Straesser, human rights spokesman for Germany's Social-Democrat party.

"Guantanamo is an American problem but its closure should not fail because we do not know what to do with the detainees," said conservative Günter Nooke, in charge of human rights issues for the federal government in Berlin.

Despite this support, Chancellor Angela Merkel's government has been more reticent about promising to take in Guantanamo prisoners. Some rights groups say that countries are unwilling to accept the Uighurs for fear of touching sensitive nerves in Beijing.

"The European Union and Germany should not let themselves be influenced by China when it comes to human rights issues," said Asgar Can. "These people are innocent after all." In China, the Uighur minority suffers the same fate as their Tibetan cousins, he added.

"But we do not have the Dalai Lama. Nor do we have Hollywood stars to defend our cause in all four corners of the world," he said.