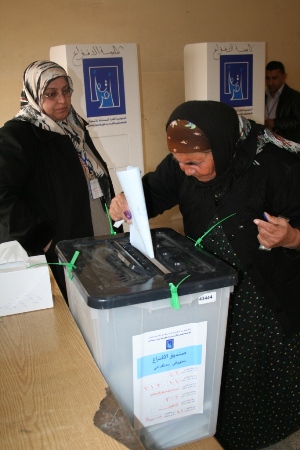 Click here for a PDF of the full report .

On January 31st, 2009, Iraqis cast their ballots for the third time since the fall of Saddam Hussein. The last provincial and parliamentary elections, held in 2005, were marred by violence that fuelled the onset of civil war.

In stark contrast, the lead-up to, and execution of, the 2009 provincial elections has been characterised by relative stability and great optimism on the part of Iraqi voters. Electoral candidates displayed new confidence, campaigning under their own names and distributing election posters bearing their photographs for the first time.

The joint UNPO-ACE Observation Mission (OM) was deployed in the Nineveh Plain region of Nineveh Province, north west of Baghdad. This region is the only area in Iraq where neither Sunnis, Shiites nor Kurds form the majority population. Instead the area is populated by Chaldo-Assyrians, Yezidis, Turkmen and Shabaks.

In 2005 the area suffered from widespread polling irregularities, so much so that an international observer presence was deemed necessary in 2009. Disconcertingly, the UNPO-ACE team learnt that they were the only international observation mission present in the entire, hotly contested, province.

This report outlines the findings and observations made by the OM over the course of five days spent in the Nineveh Plain area. It has been compiled using interviews, observations, and direct assessments of polling centre practice on the day of voting.

The OM observed irregularities and malpractice which are described in full in this report. Taken individually, these observations may not generate cause for concern, but collectively they pose questions about the coherence and consistency of the electoral process and its implementation.

Several issues detailed in the report also have the capacity to call into question the legitimacy of voting procedures in some polling centres. These issues include possible ballot box tampering, improper handling of sensitive materials and widespread confusion regarding voting for Internally Displaced Persons (IDPs).

But it is not intended that this report underestimate the obstacles that have been overcome to achieve such remarkable progress over the course of just four years.

The OM therefore congratulates the Iraqi Independent High Electoral Commission (IHEC) for surmounting the logistical challenges of coordinating voting in fourteen of eighteen provinces across the country.

As a result of the IHEC’s efforts over the past months, the optimism displayed by so many Iraqis prior to the elections appears to have been in good faith. The OM therefore hopes that the concerns raised within this report will be thoroughly addressed by IHEC in the same spirit.