Ogoni: Protest Against Shell To Return 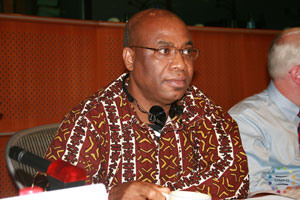 Shell attempts to return under the guise of a clean-up of polluted sites.

Below is an article published by: Daily Sun

The Movement for the Survival of Ogoni People (MOSOP) has protested alleged moves by oil giants, Shell, to return to Ogoniland despite the Federal Government’s December 31, 2008 terminal date for it to quit the area.

In a statement issued Friday [23 January 2009] evening, the organisation alleged "renewed efforts by Shell to cause trouble in oil producing communities in Ogoni, especially Kegbara Dere, under the guise of a so-called clean-up of polluted sites in the area."

MOSOP alleged that on January 20 [2009], officials and contractors of the oil major, "under the protective shield of heavily armed security operatives," stormed the spill site surrounding its Well 11 in the community.

According to the pan-Ogoni group, some identified local thugs on police wanted list for multiple murder and kidnapping were also engaged as back-up for the exercise.

The organisation saw the move as "not only provocative but also an insensitive declaration of war on the popular stance of the Federal Government" which last year terminated Shell’s existence" in Ogoniland.
"Coming after December 31, 2008 which the Federal Government gave as the terminal date of Shell‘s operation in Ogoni, a more responsible attitude would have been for Shell to have steered clear of Ogoni in obedience to the federal authorities order," it said.

MOSOP warned that the Ogoni people would not fold their arms while their peace and interests are being undermined.