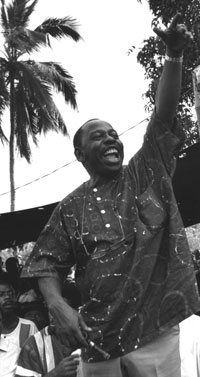 U.S. District Judge Kimba Wood set 9 February 2009 as the date for a trial stemming from two lawsuits accusing Shell of being complicit in decisions by Nigeria's military government to hang oil industry opponents.

Below is an article written by Earth Rights International:

Judge Kimba Wood of the U.S. District Court for the Southern District of New York set a trial date of February 9, 2009 for a human rights and racketeering case against the Royal Dutch Shell company (Shell) and the head of its Nigerian operation, Brian Anderson. The case was first filed in 1996. The judge rejected Shell’s attempt to file additional legal motions to postpone a trial date.

Wiwa v. Royal Dutch Petroleum and Wiwa v. Anderson are two lawsuits filed by the Center for Constitutional Rights (CCR) and co-counsel from EarthRights International on behalf of relatives of murdered activists who were fighting for human rights and environmental justice in Nigeria. The cases charge the corporation and this key official for their complicity in the November 10, 1995 hanging of Ken Saro-Wiwa and other leaders in the nonviolent opposition to Shell’s pattern of human rights abuses and environmental destruction: John Kpuinen, Saturday Doobee, Daniel Gbokoo, Felix Nuate, and Dr. Barinem Kiobel. The cases also include charges for the torture, detention, and forced exile of Mr. Saro-Wiwa’s brother, Dr. Owens Wiwa, and Michael Tema Vizor; and the shooting of Karololo Kogbara and Uebari N-nah in two attacks on peaceful protestors.

The defendants are charged with complicity in human rights abuses against the Ogoni people in Nigeria, including summary execution, crimes against humanity, torture, inhumane treatment, arbitrary arrest, wrongful death, assault and battery, and infliction of emotional distress. The cases were brought under the Alien Tort Statute (ATS) and the Torture Victim Protection Act (TVPA). The case against Royal Dutch/Shell also alleges that the corporation violated the Racketeer Influenced and Corrupt Organizations (RICO) Act.

Nigeria has been chief among Shell’s assets for many years. Critics charge that with the aim of production at any cost, regardless of the damage to the surrounding people and land, Shell disrupted thousands of lives and wreaked havoc on the environment. In the early 1990’s, the people of Nigeria began to protest. Shell made payments and provided arms to security forces that they knew to be abusive to local communities. The military government violently repressed the demonstrations and arrested and bribed witnesses. Nine leaders of the demonstrations were murdered, including the aforementioned well-known activist and writer, Ken Saro-Wiwa.

In addition to CCR and ERI, the plaintiffs are represented by CCR cooperating attorneys Judith Brown Chomsky, Anthony DiCaprio and Beth Stephens, and Paul Hoffman of Schonbrun, DeSimone, Seplow, Harris and Hoffman.

This case charges Royal Dutch Petroleum Company and Shell Transport and Trading Company (Royal Dutch/Shell) with complicity in human rights abuses in Nigeria. The particular abuses at issue are the November 10, 1995 hangings of Ken Saro-Wiwa and John Kpuinen, two leaders of MOSOP (Movement for the Survival of the Ogoni People), the torture and detention of Owens Wiwa, and the shooting of a woman who was peacefully protesting the bulldozing of her crops in preparation for a Shell pipeline by Nigerian troops called in by Shell. These abuses were intended to suppress the Ogoni people's peaceful opposition to defendants' long history of environmental damage and human rights abuses in the Ogoni region. EarthRights International is co-counsel for the plaintiffs, along with Judith Brown Chomsky, the Center for Constitutional Rights, Paul Hoffman, and Julie Shapiro.

Plaintiffs' action was brought under the Alien Tort Claims Act and also alleges violations of the Racketeer Influenced and Corrupt Organizations Act (RICO). Defendants moved to dismiss both the initial and the amended complaints on the grounds of lack of personal jurisdiction over Royal Dutch/Shell, forum non conveniens (defendants argued that the case should be heard in the Netherlands or England), and lack of subject matter jurisdiction (defendants argued, inter alia, that ATCA did not apply to a corporation and that the claim was precluded by the political question and act of state doctrines, as well as Nigerian law on corporate liability).

On September 25, 1998, Judge Kimba Wood concluded that personal jurisdiction was appropriate in New York, but also ruled that England was a more convenient forum, and therefore that defendants' motion to dismiss should be granted for forum non conveniens.

On appeal to the U.S. Court of Appeals for the Second Circuit, plaintiffs argued that a forum non conveniens dismissal would vitiate Congressional intent to allow plaintiffs' claims to be heard in U.S. courts. Defendants cross-appealed the ruling on personal jurisdiction. In a huge victory for the plaintiffs, the Court of Appeals on September 15, 2000 reversed the district court's forum non conveniens dismissal, concluding that the United States is a proper forum. The Court also upheld the district court's ruling that jurisdiction over the defendants was proper and remanded the case back to the district court to rule on defendants' other objections to the suit.

In another major victory for the plaintiffs, on February 28, 2002, the district court denied the motions to dismiss on virtually all of the plaintiffs' claims. Judge Wood's opinion found that the plaintiffs' allegations met the requirements for claims under the Alien Tort Claims Act, in that the actions of Royal Dutch/Shell and Anderson constituted participation in crimes against humanity, torture, summary execution, arbitrary detention, cruel, inhuman, and degrading treatment, and other violations of international law. The court also found that Anderson could be sued under the Torture Victim Protection Act, which allows victims of torture to sue the perpetrators in federal court. Finally, the court found that the plaintiffs' RICO claims could proceed, because Royal Dutch/Shell's actions in concert with the Nigerian military satisfied the racketeering requirements of the act, and because they engaged in these acts in part to facilitate the export of cheap oil to the United States. The court ruled that none of the defendants' other defenses were applicable, thus bringing the plaintiffs one important step closer to redress for the violations they suffered. The plaintiffs are now entitled to gather evidence by interviewing Anderson and other Royal Dutch/Shell employees, and by reviewing their documents.