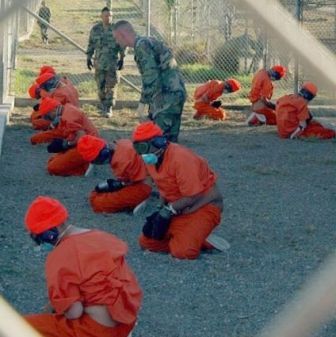 Statement by Ms. Rushan Abbas to UNPO in reaction to the  blocking of the release of 17 Uyghurs held at Guantanamo Bay

The government's action was expected yet was a disappointment.  Especially the base was prepared to transfer the men.  When I was leaving the base last night right before the ruling came in, there was a C17 at the airport and I have heard from the airport staff that the mission will carried out on Thursday [9 October 2008].  The US federal marshals were arriving at 1AM to GTMO, the local CBQ rooms were reserved for the federal marshals who supposed to make the transfer.


I was at GTMO with Wells Dixon from CCR and we and delivered the great news of Oct 7th [2008] ruling to 17 innocent men.  However, we have explained the men that this could happen.  The men were happy when they heard the news but at the same time, they were sceptical that they might be on the plane to US by Friday [10 October 2008].

After the ruling on October 7 [2008], the government immediately filed an emergency appeal to the DC Circuit Court of Appeals.  The Court has granted the U.S. Government's request for an administrative stay of Judge Urbina's ruling pending that appeal.  The Uyghur's attorneys filed an objection right the way.  The evening of October 8, the DC Circuit imposed a very short stay, for the purpose of having briefs to decide whether to impose a longer stay pending the decision on appeal.  Briefing will close by 16 October [2008].  This will push out the stay by at least two weeks, at which time we will find out whether there will be a stay pending the entire appeal.  If a stay pending the entire appeal is then entered, that would delay release by at least 3-6 months.

The lawyers are now working diligently to oppose the stay.  Kramer Levin attorneys worked yesterday until 6AM filing the response to the government's appeal.  There is a high risk that the longer-term stay will be granted as well.

A federal Court of Appeals has blocked the release of 17 Uyghur detainees into the United States, at the request of the Bush Administration.

Below is an article written by The International Herald Tribune:

A group of Uyghur Muslims set to be freed into the U.S. this week from Guantanamo Bay found their freedom stymied yet again after a simple government plea: What's a couple more weeks or so in jail after nearly seven years?

That in essence was the Bush administration's argument to a federal appeals court in a 19-page emergency request that maintained there would be only "minimal harms" if the detainees were to stay at Guantanamo a while longer.

Late Wednesday [8 October 2008, the U.S. Court of Appeals for the D.C. Circuit agreed, halting the 17 men's release for at least another week to give the government more time to make arguments in the case.

The appeals court set a deadline of next Thursday [9 October 2008] for additional filings, when it will be left up to the judges to decide how quickly to act — and in whose favor.

"Our hope is that the Court of Appeals will not stand in the way of justice," said Jason Pinney, a lawyer representing the detainees. "After seven years of unlawful imprisonment, it's time for these men to be released. The government should not be permitted to continue down this path on interminable delay."

The three-judge appeals panel that halted the detainees' release included Judges Karen Henderson and A. Raymond Randolph, both appointees of the first President Bush, and Judge Judith W. Rogers, who was appointed by President Clinton.

The appeals court's move comes after U.S. District Judge Ricardo M. Urbina on Tuesday [7 October 2008] made a dramatic decision ordering the government to free the detainees by Friday. Urbina said it would be wrong for the Bush administration to continue holding the detainees, known as Uighurs, since they are no longer considered enemy combatants.

"We are pleased that the Court of Appeals granted our request for a temporary stay, and we look forward to presenting our case," Justice Department spokesman Brian Roehrkasse said after the appeals court issued its one-page order.

The Bush administration had asked the appeals court to block Urbina's order no later than Wednesday. The detainees were scheduled to arrive in Washington early Friday [10 October 2008] and appear in Urbina's courtroom for release to local Uighur families who have agreed to help them settle into the United States.

The government said the detainees at the U.S. naval base in Cuba had admitted receiving weapons training in Afghanistan and were a national security risk.

The Bush administration also said it was continuing "heightened" efforts to find another country to accept the Uighurs, since the detainees might be tortured if they are turned over to China.

"There are extensive efforts. We oppose the idea of their release here," White House spokesman Tony Fratto said Wednesday [8 October 2008].

Albania accepted five Uighur detainees in 2006 but has since balked at taking others, partly for fear of diplomatic repercussions from China.

Uighurs are from Xinjiang — an isolated region that borders Afghanistan, Pakistan and six Central Asian nations — and say they have been repressed by the Chinese government.

The Uighur detainees were captured in Pakistan and Afghanistan in 2001.

China has long said that insurgents are leading an Islamic separatist movement in Xinjiang. The Beijing government has repeatedly urged the U.S. to turn the Uighurs over to Chinese authorities.

The Uighurs' case is among dozens currently being reviewed by federal judges after the Supreme Court ruled for a third time in June that foreign detainees at Guantanamo have the right to sue in U.S. civilian courts to challenge their imprisonment.

Emi MacLean, an attorney with the Center for Constitutional Rights, which is representing many of the detainees, called Wednesday's decision a major blow. After telling the Uighurs they would be freed, lawyers will now have to tell them "their detention is once again indefinite."

"It's hard to believe there is any sense of justice in a situation like that," she said.