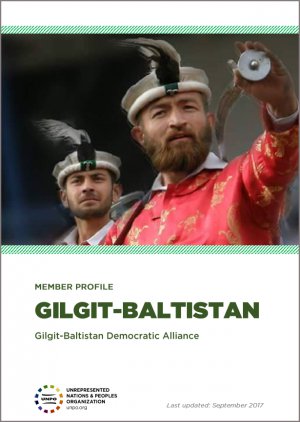 Gilgit-Baltistan is represented at the UNPO by the Gilgit-Baltistan Democratic Alliance (GBDA) an umbrella organization which also represents groups such as the Balawaristan National Front, Karakoram National Movement, Gilgit Baltistan United Movement, the Bolor Research Forum and the Gilgit Baltistan Laddakh Democratic Movement. These groups remain committed to non-violent methods of advocacy, despite a deteriorating situation on the ground.

Pakistan-occupied Gilgit-Baltistan comprises approximately 72.000 km² of territory, bordering Afghanistan to the north, the Xinjiang province of China to the northeast, the Pakistani administrated state of Azad, Jammu and Kashmir (AJK) to the south and the Indian administrated state of Jammu and Kashmir to the southeast. With an estimated population of 2 million, Gilgit-Baltistan’s legal identity and constitutional status has been disputed ever since the Indo-Pakistani partition in 1947. The area is currently under the occupation of Pakistan, in violation of the United Nations Commission for India and Pakistan (UNCIP) resolution of 28 April 1949. The occupation took place without the consent of the people of Gilgit-Baltistan and, despite the UNCIP’s calls for Pakistan to withdraw its forces from the disputed area, the occupation remains to this day. For over 60 years now, the area of Gilgit-Baltistan is lacking a proper constitutional status, a working legal system and political autonomy.

The critical shortage of a democratic setup in the region has led to constant human rights violations, extreme poverty, low literacy rates, slow economic development and growing sectarian turbulence. While Islamabad earns billions in revenue from Gilgit-Baltistan annually from trade and transit, water resource exploitation, trophy hunting, eco-tourism, mineral exploration and direct and indirect federal taxes, the significant majority of these earnings are not allocated for the development of the region.

Moreover, the China-Pakistan Economic Corridor (CPEC) cuts through the territory of Gilgit-Baltistan, forcing the local population to accept the terms and conditions of the development project without consultation nor compensation.

Deprived of accountable governance structures, as well as of constitutional and human rights, more than two million people in the region wait for their fate to be resolved. Declared a disputed territory by the UNSC in 1948, the United Nations has the responsibility to fulfil the fundamental rights of the people of Gilgit-Baltistan.  The international community, in turn, must remind Islamabad that it is an occupier in Gilgit-Baltistan.

A confluence of many different cultures and languages, especially those related to Tibet, Central Asia and India, Gilgit-Baltistan today faces what some experts call a "cultural genocide". Pakistan's educational policy bans mother tongue learning as a strategy to promote cultural assimilation and to erode indigenous identities. Plans to implement Mandarin as an optional language in schools of Gilgit-Baltistan have further raised concerns over the linguistic heritage of the region.

Pakistan-occupied Gilgit-Baltistan has also suffered from sectarian conflicts fuelled by Pakistan's policies since 1947. The first major sectarian clash in Gilgit-Baltistan occurred when anti-Shia riots broke out in May 1988 over the sighting of the Ramadan moon. In 2012, sectarian violence resurged, triggered by a quick succession of well-organised killings targeting Shia travellers on the three routes that conect Gilgit-Baltistan with Islamabad, killing more than sixty innocent people.

Besides, the China-Pakistan Economic Corridor (CPEC), intended to connect Western China to the Indian Ocean via Pakistan, cuts through the territory of Gilgit-Baltistan and is directly affecting more than 400,000 indigenous people and at least 200 square kilometers of natural environment and cultural heritage sites. The implementation of the project is being violently enforced against the will of the local population, who view the CPEC as a threat to their culture and natural resources.

Beyond the CPEC, Pakistan plans to build five mega dams in the disputed area, in violation of the resolutions adopted by the United Nations Commission for India and Pakistan (UNCIP). Altered stream flow and nutrient contents, for example, are expected to cause changes in the habitat, resulting in other downstream effects on water supply and fisheries. The people of Gilgit-Baltistan firmly believe that Pakistan has no right to build a dam in an area which is disputed and whose fate is still to be settled under the UNCIP resolutions.

Last but not least, for over six decades now, Gilgit-Baltistan has seen systematic human rights violations occurring on its soil. Its people continue to live in a constitutional limbo, where the Pakistani government does not include the region in its constitution, but doesn't give its people their right to self-determination or political representation either. The population of Gilgit-Baltistan is also stripped from its freedom of movement, of speech, its right to peaceful protest and freedom of association.

For more information on Gilgit-Baltistan, including: