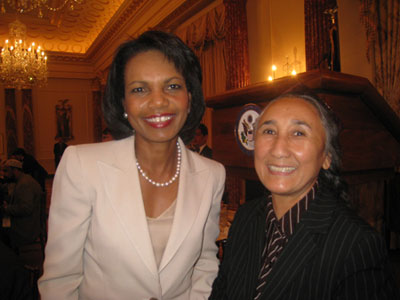 Uyghur leader thanks Condoleezza Rice and praises the US ongoing concern over the persecution of Uyghurs.

Below is an article published by the Ughur American Association:

During the reception in honor of the Islamic holy month of Ramadan, both Ms. Kadeer and Mr. Seytoff have met and talked to Secretary Rice. Ms. Kadeer thanked Madame Secretary for the U.S. efforts in securing her release from a dark Chinese prison and praised America's ongoing concern over the persecution of Uyghur Muslims by the Chinese government.

This is the second time both Ms. Kadeer and Mr. Seytoff attended the Iftaar Reception at the State Department. 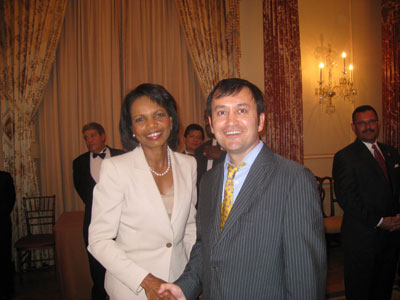 Below is a Statement by Ms. Rebiya Kadeer following the Iftaar Reception:

"I am really delighted to see Madame Secretary Condoleeza Rice at the Iftaar Reception. It was an honor for me to thank her personally regarding the U.S. efforts in securing my release from Chinese incarceration and the continuous support of the U.S. Administration for our peaceful struggle for freedom. I was released on March 17th 2005, just three days before the first official visit of Secretary Rice to China. Secretary Rice played a very important role in my release. So I am very grateful.

"I am also very grateful for her to host the Iftaar Reception in honor of the Islamic holy month of Ramadan at a time when the Chinese authorities have launched an attack on the religious practices and observances of Uyghurs Muslims in East Turkestan. The Chinese government has banned Uyghurs from fasting, wearing veils or growing beards. They have detained and arrested many Uyghurs who simply want to fast, wear a scarf or just grow the beard. Furthermore, many Uyghur restaurant owners have been forced to open their restaurants and serve food. Those who refused to do so have been arrested. We hear daily arrests and raids after China imposed virtual martial law in East Turkestan after the closure of the Beijing Olympics and the beginning of Ramadan. This is simply unacceptable. The international community should put more pressure on China to stop such heavy-handed repression of Uyghurs."