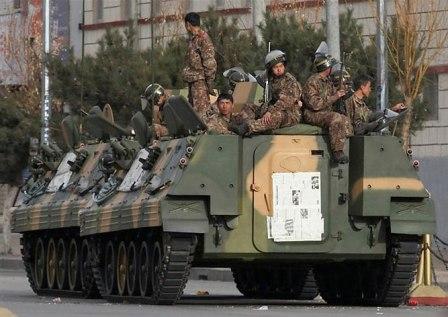 The Burma Centre, Tibet Support Group, and International Campaign for Tibet will host a peaceful demonstration calling for sustained attention to human rights to all peoples in China after the Olympics Games.

"China Go For Gold! Give Human Rights in Beijing A Chance!"

On 8 August 2008, the Opening Ceremony of the 2008 Olympic Games will mark a momentous event in Chinese history in Beijing. By then, the Olympic flame torch relay will have completed its journey through six continents and throughout China – as a symbol for peace between nations and peoples. This message also passed through East Turkestan, Inner Mongolia, Taiwan and Tibet.

These groups are joined together in UNPO, and are united by democratic and nonviolent principles. Our common objective is to protect and promote their human and cultural rights, preserve their environments, and find nonviolent solutions to conflicts which affect them.

UNPO expresses great concern for any unjust treatment of its members by the PRC.

With the conviction that Gandhian nonviolence is the most effective means of achieving greater human rights enforcement, the UNPO calls upon all members and the international community to peacefully urge the PRC authorities to:

Push for the release of arbitrarily arrested and detained prisoners of conscience for participation in nonviolent protests and activities against the PRC authorities;

Uplift its stringent media bans to allow for the freedom of expression by UNPO member communities; and

Promote peaceful dialogue with UNPO member communities on the subject of increased autonomy and self-determination.

UNPO believes that respect for basic human rights and autonomy is an integral step in the process of securing peace, reconciliation, and justice in China. The Olympics are an important symbol of peace and unity between all nations and peoples around the world. It is only when the PRC authorities begin to listen to the demands of its people, that we can truly hope for “One World, One Dream.”