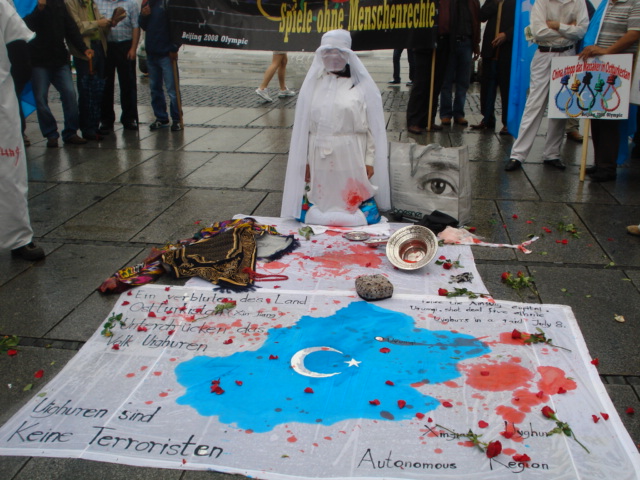 Over 200 protesters met in Munich on 12 July 2008 to bring attention to the continuing and escalating human rights violations towards the Uyghurs and other ethnic minorities in China.

Below is an article by UNPO:

In Munich this Saturday, 12 July 2008, Uyghur protestors and supporters gathered together at Karlplatz Stachus, a central and highly touristic part of the city, to demonstrate against recent arbitrary arrests and executions in East Turkistan. More than 200 participants attended the demonstration, according to the World Uyghur Congress, but numerous of passer-bys stopped to show support for the Uyghur cause.

Currently, East Turkestan and Tibet are both in a state of emergency, living in fear of oppression by the Chinese government. On 9 July 2008, police shot to death five young Uyghurs in Urumchi, under the auspice that they were involved in an alleged “holy war training” against the state. Later the same day, there was a mass sentencing in Kashgar where two Uyghurs were executed and 15 others were handed sentences ranging from 10 years in prison to the death penalty. Although charged with terrorism, the accused had no evidence presented against them to substantiate these claims.

In light of the upcoming Olympic Games, starting 8 August 2008, international pressure has intensified concerning the human rights situation in China. Unfortunately, the added attention is not enough to persuade the Chinese government away from its oppressive policy towards ethnic minorities, particularly in East Turkistan and Tibet. The Olympic Charter obliges the host country to a strict adherence to the international standards of human rights, yet the Chinese government has failed to live up to these standards.

The World Uyghur Congress and UNPO continue to urge Chinese government to end persecution of ethnic minorities in China as well uphold the international standards of fundamental human rights. UNPO stands in solidarity with the oppressed peoples in China.