A hunger strike was organised in a bid to raise awareness of the dire situation of the Hmong in Laos and Thailand.

Below is the resolution as adopted by the World Hmong People’s Congress:

On May 31, 2008 for the first a Hmong Hunger Strike was organized in the U.S., following Gandhian Non-violent principles. With the warm and full support of Hmong community in Minnesota and other regions including Illinois and Wisconsin, ages from 6-78 years old came to join the “Hmong Hunger Strike Rally”.  Huechee Yang was among some of the youngest activists in history not eating from 9:00 AM – 6:00 PM due to their Hmong brothers and sisters’ Crisis in Thailand and Laos. 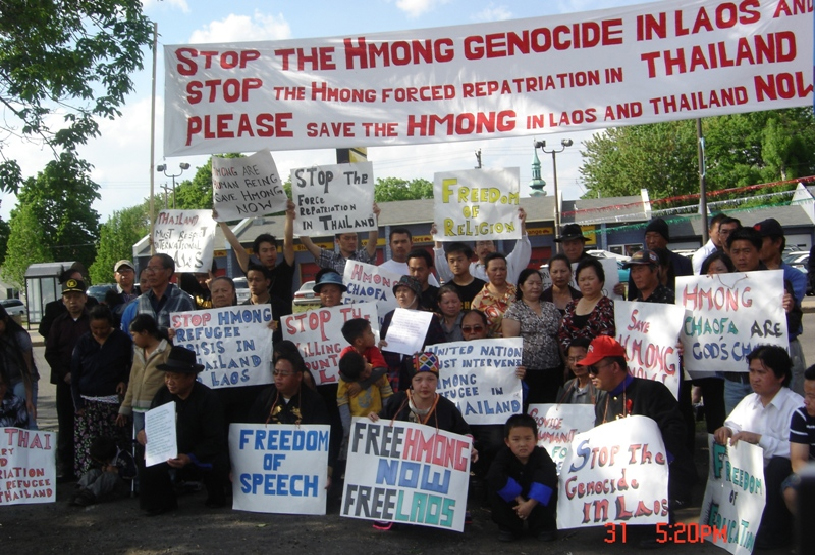 The event was very successful and supported by many of the Non-Government Organizations including, representatives of The Hmong Genocide Team (HGT), Hmong Women Council of America (HWCA), Asian Council for Indigenous Nations (ACINS) and World Hmong People’s Congress (WHPC), unanimously have adopted the following urgent resolution:

Whereas, the Hmong ChaoFa Indigenous, a Proud Peace Loving Nation existed more than 5000 years in Greater Asia and Southeast Asia, with their own written language, unique culture, religion and national flag;

Whereas, the Hmong ChaoFa Indigenous Nation, are the descendants of Hmong Great King Chi-You (Great Grand Father in Hmong) and Joualidou, was his Kingdom in the 2600 BC; and San-Miao Kingdom (now called Southern China) and Prince Nraug Na and Princess Gao Youa were the founders of the Great Kingdom of Jars (now called Plain De Jars) Xieng Khoung Province, Laos;

Whereas, Hmong ChaoFa Indigenous Nation are not foreigners to Thailand ( Siam), due to the Siam King  Chulalongkorn (Rama V) of the Chakri Dynasty’s annexation and colonial empire policy; Hmong ChaoFa indigenous Nation was divided and their territories and Capitals were destroyed in 1879-1884 before the signing of  (Franco-Chinese Treaty 1885 and Franco-Siam Treaty 1907);

Whereas, his Majesty King Bhumibol Adulyadej of Thailand  was the father for all Indo-Chinese Refugees, including thousands of Hmong who are now living scattered over the world, once in the past their parents  were in the hospitability of Thailand since 1975;

Whereas, Hmong Nation was allied with the France during the French-Indo-China era for the French Colonial Empire from 1946 to 1954 under the commander of Major Roger Trinquier;

Whereas, the Hmong people also allied with Thailand and the United States, as  the  frontline troops to stop the annexation, colonial occupation of the  PathetLao regime and  North Vietnam-the Vietcong military in Laos during the Vietnam war era about 1960 to 1975 and more than 40,000 Hmong lost their lives;

Whereas, Thailand had provided many military bases to train the Hmong troops, Hmong Pilots, how to use arm weapons, by the best Thai instructors during the Vietnam War era 1960s;

Whereas, when Thailand and the US withdrew their troops, the Hmong Nations were hatred, racial discrimination and labeled as the enemy of the PathetLao or Lao People’s Democratic Republic and Vietnam, for the loss of thousands lives and countless properties that perpetrated  by Thailand and the U.S. both in Laos and Vietnam during the Vietnam war era 1960-1975;

Whereas, the Hmong Nation sacrificed so much to bring the two great cities such as Long Kao and Sam-Mou Ban, Thailand back from the hand of Laos People Democratic of Republic, after more than 3000 Thai troops died and can not resolved the conflict between  Thailand and Laos in the 1980s;

Whereas, in the Prem Tinsulanouda  Administration from 1980-1988, a Hmong leader named Mr. Yang, Chia led 126 Hmong best troops to help bring back the Peace, Freedom and Democracy for Thailand during the Thai Communist and Thai Democracy conflict;

Disturbed by thousands of Hmong Refugees who were forced deportation back to Laos since 1990, including the 27 Hmong children and a pastor who were kidnapped by Thai authorities and forced back to Laos, while they came from Church in Ban Khetnoi, Phetchanboun Province in December 2005, they were never to be seen again;

Alarmed by the growing of systematic repression, arbitrary arrests, detention and imprisonment of Hmong ChaoFa Indigenous Nation; by the total absence of freedom of association, opinion, expression; and the constant extra-judicial execution of innocent Hmong in the last thirty-three years from 1975 to the  present of 2008;

Applauds the eight U.S. Senators for their urgent letter on May 16, 2008 to urge Secretary of State Rice, to request Thailand’s Prime Minister Samak Sundaravej’s urgent help to stop the forced deportation of Hmong Refugees in Huay Nam Khao and Nongkhai Detention Center, Thailand back to Laos; because Hmong  will face persecution by Lao Government;

Alarmed by the flooding of thousands of Hmong Refugees continuing to Thailand  and over the world  since 1975 including  more than  8000 Hmong refugees  in Huay Nam Khao, Thailand, due to the Lao-Vietnam Friendship Treaty Cooperation  signed on July 18, 1977 by former PathetLao Secretary General Kaisone Phouvihane  in Hanoi, and requested more than 65,000 Vietnamese mercenaries to help Lao  PDR regime to suppress the Hmong ChaoFa  States; due to the distinct of Hmong ChaoFa  Indigenous Nation’s, religion, culture and written language;

Disappointed by the continuing rejection by Lao President Chommaly Sayasone and his regime (LPDR) to invite UN Special Rapporteur and third party including Amnesty International and Human Right Watch to investigate the ongoing gross human rights violation against Hmong ChaoFa Indigenous men, women and children in the Hmong ChaoFa State (Xaisomboun Special Zone), Mt. Phoubia areas, and continuing to ignore the UN experts recommendation during the 66th Session March 2005 in Geneva. Under Article 9 of the Convention (C. 21). The Lao Government should start an initiative to find a peaceful solution between the Hmong ChaoFa Indigenous Nation, and allow Humanitarian aids such as food, medical, clothes to help the Hmong ChaoFa Indigenous in the Rain-Forest at Hmong Chaofa State, Xaisomboun Special Zone, Northern Laos as soon as possible;

Noting the UN CERD Country Rapporteur’s strong disappointed for the Laos Government, a State Party to the Convention for total disrespect the CERD Committee. Its regime showing little interested in the Committee’s offer for assistance, although Lao Government had claimed that its   status as a developing country and its lack of necessary technical skills.  The CERD Committee did not enjoy the good relationship with the government  of Lao People’s Democratic Republic and indeed, no other State Party had ever been as late in fulfilling its reporting obligations in 19 years late from 1984 to 2003 ( CERD/C/SR.1593);

Fully support the urgent request of the Committee on the Elimination of Racial Discrimination (CERD) in 2003, which expert members urge the terrible plight of Hmong who were suffering from the utter neglect, posed a serious threat for the Committee to bring to the attention of the UN SECURITY COUNCIL and also urge the Committee to put as much pressure as possible on the Lao Government (CERD/C/SR.1593);

Recognize that about 7000 Hmong indigenous men, women and children  out of  more than 100,000 Hmong ChaoFa, who were forced from their villages to the Rain-Forest, […] hunted by the Lao and Vietnamese Mercenaries in the Hmong ChaoFa State, Xaisomboun Special Zone,  Northern Laos since 1975. Till now, they still living on leaves and roots;