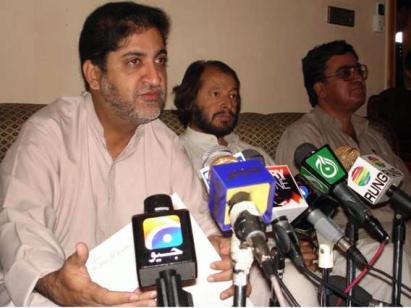 The Pakistani government is making good on its promise to release political prisoners, as Sardar Akhtar Mengal, leader of Baluchistan National Party was released from prison on Friday, after eighteen months of detention without trial.

Below is an article written by Salman Masood published by the International Herald Tribune:

A Baluchi nationalist leader who was one of the most prominent political leaders jailed by President Pervez Musharraf was freed by the government Friday [9 May 2008], fulfilling one of its major promises - to release political detainees.

Sardar Akhtar Mengal, leader of Baluchistan National Party and a former provincial chief minister, was released from Liaqut National hospital in the southern port of Karachi.

Prime Minister Syed Yousaf Raza Gilani had ordered the withdrawal of all cases against Mengal at a meeting last month in Quetta, the provincial capital.

Mengal's release signaled a reversal of one of the several controversial policies pursued by Musharraf, under whose rule the army engaged in large-scale operations against rebellious tribesmen in southwestern Baluchistan Province, which borders Iran and Afghanistan.

The operations were widely criticized for human rights abuses, mass disappearances and the use of force for what is largely seen as a political problem of provincial and ethnic minority rights.

Western officials also worried that military and paramilitary forces were absorbed in Baluchistan while the build-up of Taliban and Al Qaeda militants in the tribal areas of the North West Frontier was going on relatively unmolested.

Benazir Bhutto, the former prime minister, had promised to release all political prisoners, including Mengal […] in the months before her assassination in December.

Bhutto's husband, Asif Ali Zardari, now co-chairman of her Pakistan People's Party, had vowed to continue her policies after the February [2009] elections, when the party emerged as the largest vote winner and Musharraf's party was badly beaten and thrown out of power.

Mengal was arrested in November 2006 and charged with treason and manhandling two officers of Military Intelligence whom he accused of harassing his children on their way to school. Party leaders contend that 500 other supporters were arrested in the province in November 2006 during the government's crackdown on nationalists.

Mengal had served as chief minister of Baluchistan Province in the 1990s and was one of the most vocal Baluchi voices of political dissent.

Baluchi nationalists have long held grievances against the federal government. They demand greater autonomy and a greater share in the resources of the mineral and natural-gas rich province. The building of a deep sea port at Gwadar has also angered the nationalists, who fear being inundated by outsiders and complain of job opportunities denied them at the port project.

Mengal said he had not agreed to any conditions from the government to win his release. He vowed to continue the struggle for Baluchi rights and demanded that all those arrested in the province be released. Baluchi leaders say thousands of their people have disappeared after being detained illegally by the Musharraf regime.