Photo News: Envoy to H.H. the Dalai Lama Arrives In China For Talks

The first in a new round of talks aimed at resolving the crisis in Tibet have begun, but it remains to be seen if China is willing to listen and act.
Below is an article reported by Reuters and published by Phayul: 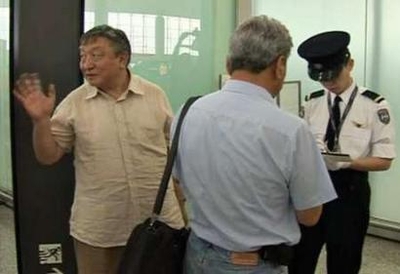 Lodi Gyari (L), an envoy of the Dalai Lama, waves to members of the press as he leaves for a flight to India, at Hong Kong airport in this video grab taken on May 6, 2008. Lodi Gyari said on Tuesday [6 May 2008] that one-day talks with China on the unrest in Tibet had been "a good first step", and the two sides will meet again after he reports back to the exiled spiritual leader.