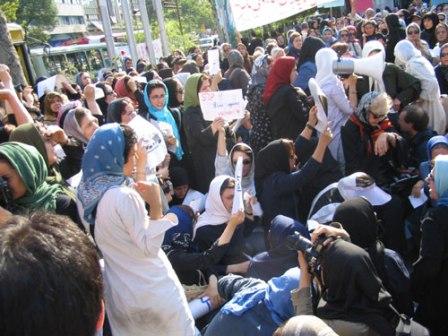 The International Campaign for Human Rights in Iran publishes a report today which highlights the systemic restrictions which women in Iran must live under on a day-to-day basis.

Below is a summary of a report issued by the International Campaign for Human Rights in Iran:

Iranian authorities have systematically thwarted peaceful and legal civil society efforts to advocate for women’s rights in Iran, abusing the legal system and gravely violating internationally protected civil rights in the process.   “Equal Rights Denied—The Systematic Repression of the Women’s Rights Movement In Iran,”  published today by the International Campaign for Human Rights in Iran, illustrates this process by providing concise but comprehensive documentation of the persecution of women’s rights defenders.

Women’s rights advocates have been beaten, harassed and persecuted for exercising their right to assembly, association and expression:  for peaceful demonstrations; for collecting signatures on behalf of the “Million Signatures Campaign” to remove legal discrimination against women in Iran’s legal codes and system; for writing and publishing articles; for convening meetings; and for traveling for the purpose of having contact with their peers abroad.

They have received court summonses, and have been interrogated, ill-treated, kept in solitary confinement, denied access to lawyers and families, and subjected to pressures to confess to spurious charges.  Court procedures in their cases have been universally unfair and in violation of Iranian law. Bail amounts have been excessive, forcing many defendants to remain in detention. Persecuted women’s rights advocates have generally been charged with “acts against national security” and other vague and/or unreasonable offenses.   Many have been convicted and sentenced to jail terms and suspended sentences apparently aimed to keep them in a state of isolation and fear, and thus to suppress and repress further human rights activity.

The women’s rights movement is the most vivid and well-organized widespread human rights campaign in Iran.  Under the government of former President Mohammed Khatami, civil society was encouraged and supported.  Over 600 nongovernmental organizations were established to promote and encourage respect for and implementation of women’s rights.

These groups found common cause advocating for changes in a legal system in which discrimination against women is deeply embedded.  They began to campaign for equal rights between women and men in marriage; equal compensation for injuries and accidental death; equal inheritance rights; for prosecuting perpetrators of honor killings; for equal access to and treatment in courts of law; and against death sentences by stoning in cases of adultery.

With the government of President Ahmadinejad, the status of Iranian women has deteriorated precipitously. A “Program for Social Safety” allows the authorities arbitrarily to harass women for not wearing “appropriate Islamic dress.” A “Family Protection Act” has been promulgated that would harm the welfare and rights of women further, by legitimizing  polygamy, allowing temporary marriages, marriage at the age of only 13, and other measures.    Furthermore, a system of quotas has been introduced giving males an unfair advantage in obtaining admission to the system of higher education.

As this report shows, not only the precarious situation of Iranian women themselves but also their possibility to defend their rights are increasingly exposed and in peril.  The International Campaign for Human Rights in Iran includes in the report a set of recommendations for removing legal discrimination against women and respecting the internationally guaranteed human rights including standards for human rights defenders.

“Equal Rights Denied—The Systematic Repression of the Women’s Rights Movement In Iran” is available  on the website of the Campaign at http://www.iranhumanrights.org/themes/womens-rights.html.