Balochistan: Gwadar "Left Behind" by CPEC

Concerns have been growing around the future of the Pakistani city of Gwadar and its role in the China-Pakistan Economic Corridor (a key part of China's Belt and Road Initiative (BRI). Once a remote fishing village, Gwadar has become home to a large deep-sea port and the subject of national and international debate. However, the people from the remote fishing communities, who make up over 70% of the local population, have been sidelined to make way for the vast infrastructure project. Having lived there for centuries, many of the fisherfolk were moved to other parts of the city to allow construction projects to go ahead. Moreover, despite the construction of a few fancy roads and buildings, most areas of the city remain poor slums with little infrastructure, thus demonstrating that the CPEC project is bypassing and ignoring the needs of local people.

Below is an article by The Diplomat

In May, the United States’ senior diplomat for South and Central Asia, Alice Wells, repeated her criticism of China’s ambitious Belt and Road Initiative (BRI) and its flagship project, the China-Pakistan Economic Corridor (CPEC). In response, the foreign office (FO) in Islamabad immediately defended CPEC, offering reassurances about CPEC’s transparency and its perspective contribution toward national development.

This remote fishing town gained a deep-sea port in the early 2000s and was announced as the southern hub of CPEC in 2014. Since then, Gwadar’s economic potential has become a center of debates in national and international media. Less-discussed are the people living there — especially the fishing communities that makeup over 70 percent of the regional population.

Fishing folk had lived in some of the oldest neighborhoods of Gwadar for centuries. Then, in early 2005, the Gwadar Development Authority (GDA) designed a master-plan – a new map for Gwadar that showed the old neighborhoods being subsumed by the port. This resulted in the relocation of a large part of the old town’s population to the north of Gwadar, in a new neighborhood called Noken Mullah Band about 8 kilometers away. The other half of the population, however, remained in place.

Since the plans called for part of the town to be merged with the port, the government authorities began to neglect it and its population. In contrast to the map and designs of the GDA — which showed high towers, buildings, and beautiful infrastructure all around Gwadar — this part of the town remained without basic needs like water, a proper power supply, or a sewerage system. 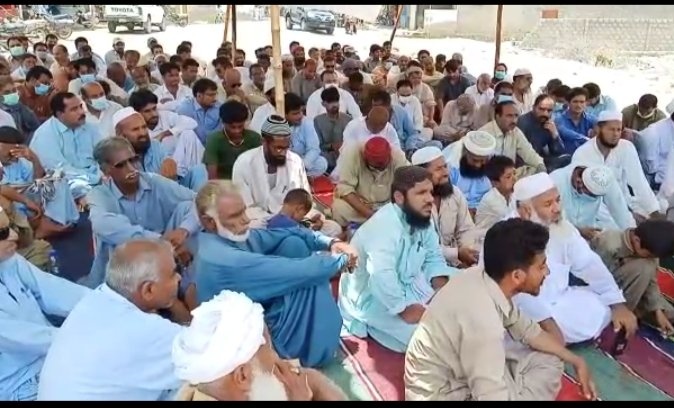 So far the only source for water supply in Gwadar and nearby areas is a seasonal outpour that would fill up the dams, but annual rainfall has also dropped in the last few years, increasing the problem of water scarcity. The desalination plants introduced by the GDA and others as a solution have yet not been able to help the population. Meanwhile, if and when it rains, the old neighborhoods flood with rainwater and sewage, making for miserable living conditions only 2-3 kilometers away from Gwadar Port.

Problems are not limited this part of the town. Away from the few fancy roads, lined with palm trees and park projects near the GDA office and the road leading to Gwadar Port, most of Gwadar remains slums. Drain water flows on the roads in some parts, whereas other parts have dusty streets without basic facilities,

Many believe this was purposeful, part of a plan to persuade people to leave the area themselves without the government needing to make much effort to oust them. But instead of moving, people began to protest against being displaced and  demand the provision of access to basic water, power, and sanitation systems.

Last year, the approval of a new master plan for Gwadar assured that no more old neighborhoods will be relocated, and that the old town will be preserved as the cultural heritage of Gwadar. This was also discussed by the provincial government officials in March 2019 at an annual book fair held by the local Rural Community Development Council (RCDC).

On June 16, former Provincial Minister for (Public Health and Engineering) Mir Naveed Baloch shared in a tweet about a meeting he had with GDA and PHE officials, together with local activists. It was decided by both the GDA and PHE to solve the water supply issue by connecting Sawad Dam with Gwadar city while also resolving the sewerage situation.

However, with the recent cuts in the federal budget (2020-21) for Balochistan, projects in Gwadar will be severely affected. As for the GDA and the ongoing projects — a desalination plant, Gwadar’s new airport and others — a very small proportion of total costs has been allocated.

The problems, however, in Gwadar are not limited to the provision of basic services. With every new development scheme, a new issue arises.

For instance, in 2018, one of the China-Pakistan Economic Corridor’s development schemes — a 19-kilometer expressway providing a direct link for cargo traffic to and from Gwadar Port, connecting it with Makran Coastal Highway — once more stirred conflict. The expressway blocked 4.3 kilometers of the coastline, cutting off the old neighborhoods and limiting the access of fishing boats to the sea, resulting a new wave of protests by local population.

The leadership of Gwadar’s fishermen community went on to design a list of demands, asking government authorities to ensure their access to the sea, protection of their livelihood, and special legislation for them in provincial assembly.

Two of the most important demands included construction of a 1,500-meter long and 800-meter wide breakwater to safely berth their boats and three underpass access points, each 200 feet (60.96 meters) wide, at the three main fishing neighborhoods.

With their fears growing, over the last two years the fishermen held strikes to have their demands accepted by the government. While they have been reassured many times by officials at the Gwadar Port Authority (GPA), there was hardly any budgetary allocation or documentation that projects to secure the fishermen’s rights were moving forward.

On June 8 the provincial government’s finance minister Zahoor Buledi, raised the hopes of the regional population by tweeting: “Eastbay break water for Fishermen of Gwadar has been approved by CDWP meeting planning commission, long-awaited issue resolved after a longtime.”

The next day, thousands of Gwadar’s fishermen rallied at the Gwadar Press Club, celebrating the dawn of their success after two-year long protests. During the rally, the representatives of fishermen community questioned government authorities about the approval of rest of their demands.

The celebration, however, did not last long. On June 13, Senator Kahuda Babar tweeted, “Allocating only PKR 200 million for the Eastbay Expressway project that actually has an estimated cost of PKR 1 billion and is supposed to be completed within a year, is clearly a plan for failing the project. This is ill-treatment towards the people of Balochistan. We were not expecting this from the PTI government.”

CPEC has been called a game-changer by government authorities in Pakistan and China, and diplomats, minsters, and senators continue exchanging tweets about the project. But for the people in Gwadar, the hub of CPEC, life is still slow as it has always been.

Gwadar is yet to see the fruits of the promised “economic development” and “long-term prosperity.” As the local people say, “We are not against development that includes economic and social growth for us and does not destroy our homes and livelihood, but we are against the development that excludes us and leaves us empty handed.”

Mariyam Suleman is a freelance writer from Gwadar and holds a master’s degree in sociology from University of Karachi. She tweets at @mariyamsuleman