A new Chinese National Security Law, which will allow amongst others China to extradite people from Hong Kong it deems as criminals to the mainland, has been passed by Chinese lawmakers. Included in the list of crimes punishable are "secession, subversion, terrorism and collusion with foreign forces". The new law will almost certainly be used to "stifle dissent", as China will be able to impose its laws on any criminal suspects in Hong Kong, and marks an end to the "one country, two systems" framework set up as part of Hong Kong's transfer from Great Britain to China in 1997, breaking China's international commitments to keep Hong Kong autonomous. Understandably, many "[p]rominent activists believe they are likely to be arrested within days after the law’s enactment." The UNPO strongly decries the passage of this act.

Below is an article by the Guardian

Beijing has passed a sweeping national security law for Hong Kong that critics fear will crush political freedoms and pave the way for China to cement its control over the semi-autonomous territory.

Less than 40 days after Chinese lawmakers first proposed imposing an anti-sedition law on Hong Kong, the standing committee of the National People’s Congress, on Tuesday approved the measure, according officials and multiple media reports.

Tam Yiu-chung, former chairman of the pro-Beijing DAB party and Hong Kong’s only member of the standing committee, told local media that the law had been passed. The full text of the law had not yet been released.

The legislation, criminalising secession, subversion, terrorism and collusion with foreign forces, deals a devastating blow to Hong Kong’s autonomy as promised under the “one country, two systems” framework, the terms of the former British colony’s handover to Chinese control in 1997. Rights advocates and legal scholars believe the law, to go into effect on 1 July, will be used broadly to stifle dissent.

“The passing of the national security law is a painful moment for the people of Hong Kong and represents the greatest threat to human rights in the city’s recent history,” said Joshua Rosenzweig, the head of Amnesty International’s China Team.

“From now on, China will have the power to impose its own laws on any criminal suspect it chooses,” he said. 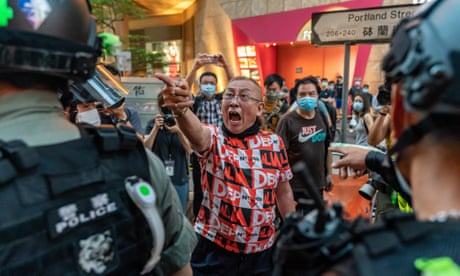 On Monday, residents were waiting for the full details of the law, which was passed unanimously by China’s rubber stamping legislature, according to Hong Kong media. The editor of the state-run Global Times said that the heaviest penalty would be life imprisonment, while Hong Kong public broadcaster RTHK said that some especially “serious” cases may be handled in Chinese courts on the mainland.

According to a summary released previously by Chinese state media, the law will see Beijing set up a national security agency in Hong Kong to “guide” the territory’s implementation of the law. It will also have jurisdiction over cases in “certain circumstances”. Should discrepancies arise, the security legislation will override Hong Kong law. The law promises to protect the civic rights of Hong Kong residents but critics say such language means little given how similar laws are used in mainland China.

In the decades since the handover, Hong Kong’s free press, independent courts and legislature, as well as its traditions of protests and marches have made the city a haven for the civil liberties not enjoyed across the border, especially as the government under Xi Jinping has further cracked down on civil society.

Those differences were thrown into sharp relief last year as protests – over another controversial bill that residents saw as further Chinese encroachment on their city – turned into a broader democracy movement.

Authorities have been clear that the legislation is aimed at stopping those protests, which have created new diplomatic tensions as countries have condemned Beijing’s move to force the law on Hong Kong. On Tuesday, Japan called the development “regrettable” while Taiwan warned its citizens from visiting the city.

President Tsai Ing-wen of Taiwan, which is opening a dedicated office to helping residents fleeing from Hong Kong, said the latest move from Beijing shows that the one country, two systems formula is “not feasible.”

“We hope Hong Kong people continue to adhere to the freedom, democracy and human rights that they cherish,” she told media.

The US said on Monday it would stop exporting sensitive military items to Hong Kong, as it moved to revoke the city’s special trade status as separate from China. The US has also said it would limit visas for current and former Chinese officials believed “responsible for, or complicit in, undermining Hong Kong’s high degree of autonomy”.

Lam said on Tuesday: “Any sanctions will not intimidate us. Our country will have counter measures.”

Critics say the law marks Beijing’s full take over of Hong Kong, promised 50 years of a “high degree of autonomy” after the handover. The national security law will be directly enacted into Hong Kong’s law through a legal manoeuvre that bypasses the territory’s own legislature and the possibility of public dissent stopping the process. Mass protests in 2003 halted similar legislation attempted by the Hong Kong government. 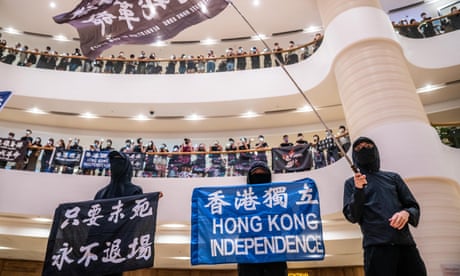 ‘Grave cause for concern’: Hongkongers could be extradited to China under new security law

Prominent activists believe they are likely to be arrested within days after the law’s enactment. In the past year, police have arrested more than 9,000 protesters, including pro-democracy lawmakers and activists who have frequently lobbied to bring international attention to Hong Kong’s cause.

“From now on Hong Kong enters a new ear of reign of terror,” activist Joshua Wong wrote on Twitter. “However, even under ... China’s direct authoritarian rule Hong Kongers will continue to fight… When justice fails, our fight goes on,” he said.

Wong and two other prominent activists resigned from their political party Demosisto hours after news of the law’s passage. Other protesters said they would be taking down their social media profiles.

The law’s reported passage comes in time for an annual protest on Wednesday, the anniversary of Hong Kong’s handover to Beijing’s control. Police have banned the march, which has taken place every year since 1997, citing Covid concerns but activists have said they would still demonstrate.

On Lihkg.com, a site popular with protesters, users called for people to come out to “celebrate” the passage of the law. “July 1st, let’s go to the streets to celebrate,” one said. Referring to the park where the annual demonstration takes place, another said: “See you in Victoria Park on July 1.”