The Right to Live in Voluntary Isolation: Indigenous Peoples of the Amazon in the Age of Covid-19

While many uncertainties remain about the new coronavirus (SARS-CoV-2), its geographic scope is undoubtedly boundaryless. On 9 April 2020, the Brazilian Minister of Health reported the death of a fifteen-year-old adolescent belonging to the Yanomami tribe as a result of Covid-19 infection. With approximately 35,000 members living in a zone of the Amazon rainforest located between Northern Brazil and Southern Venezuela, the Yanomamis are the largest isolated Indigenous tribe in the Americas.

The disappearance of this young man has raised many concerns for the already-threatened survival of Indigenous peoples living in voluntary isolation and initial contact in the Amazon Basin and Gran Chaco region. While it is difficult to number and locate these peoples with certainty due to their remoteness, it is estimated that approximately 200 tribes (about 10,000 individuals) still live in total or relative isolation, principally in areas of the Amazon region - or, from a state-centered perspective, Bolivia, Brazil, Colombia, Ecuador, Guyana, Paraguay, Peru, Suriname and Venezuela. In particular, Brazil is the country with the highest number of Indigenous peoples living in voluntary isolation, as 114 tribes have been identified by the National Indian Foundation (FUNAI) and the existence of other isolated bands remains to be confirmed.

In spite of their considerable diversity and historical presence, the survival of these peoples is threatened, insofar as they experience situations of extreme vulnerability - sanitary, political, sociocultural and demographic. In particular, the perils triggered by the current Covid-19 pandemic are of utmost concern, since these tribes are particularly vulnerable to contagious foreign diseases against which they often have no immune defense. Stafford Lightman, professor of medicine at the University of Bristol, explains that "[t]he consequences of an infection that affects an entire community is that very few people will be spared. […] Consequently, not only will they be sick, but nobody will be able to care for them or feed them, with the serious consequences that this will have on the group's ability to continue to survive without outside help.”

The current Covid-19 pandemic is certainly reminiscent of many infectious diseases that have threatened and decimated Indigenous peoples throughout the successive waves of forced contact with the protagonists of the "White Border” in the region. Among other infectious diseases, malaria, measles, and respiratory infections are said to have killed more than half of the peoples into which they were imported. In addition, Indigenous peoples living in voluntary isolation and initial contact cannot count on effective health care systems. In other words, while their immunological vulnerability is maximum, the response capacity of health services is minimal, underlines agroecologist Wilmar Bahamon.  In a report published in 2019, the Inter-American Commission on Human Rights expressed great concerns about the high risk of extinction of certain Peoples, such as the Nükak, due to epidemics, famines, environmental degradation, or the loss of their rites and languages. In these times of pandemic, the risk of ethnocide is, once again, exacerbated for the Peoples of the Amazon who live in voluntary isolation or initial contact.

Indeed, despite the delimitation of their lands as protected and intangible areas as well as the creation of buffer zones in most States of the Amazon region, one of the main threats to the survival of isolated peoples is the invasion of their lands by outsiders. In the current era of neo-colonialism, the region suffers from planned occupation and the installation of major development projects, which have justified multiple scientific, technical and military missions into their territories. Illegal loggers and miners, as well as agribusiness magnates have also been invading the areas which are home to Indigenous peoples in voluntary isolation and initial contact. Over the last weeks, in the Brazilian State of Rondônia, Indigenous organizations have reported the presence of garimpeiros (illegal gold miners) and madeireiros (timber traffickers) who have used the current health crisis as a cover to intensify their profit-driven invasions in the territories where the Karipuna people lives. Furthermore, while mining is illegal in Indigenous reserves under Brazilian law, President Jair Bolsonaro has recently introduced a bill which would open these lands to mining, oil and gas extraction, in the name of the so-called “development.” In a statement, Survival’s Uncontacted Tribes campaigner Sarah Shenker declared, “many of their territories are being invaded and stolen for logging, mining and agribusiness, with the encouragement of President Bolsonaro, who has virtually declared war on Brazil’s indigenous peoples.” 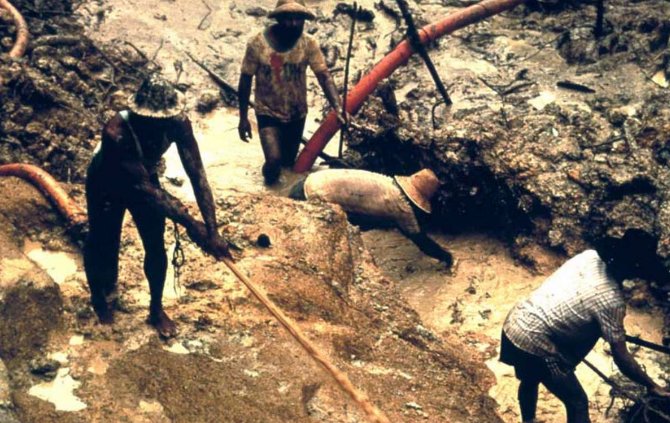 According to Douglas Rodrigues, specialist in indigenous health at the Universidade Federal de São Paulo, the only emergency plan which can guarantee the survival of these peoples is "the expulsion of the invaders and the protection of all lands where there are indications of [their] presence." In particular, for these Indigenous tribes, the right to self-determination, as guaranteed by the United Nations Declaration on the Rights of Indigenous Peoples among other legal documents, should be understood as the guarantee of respect for their decision to remain in isolation, also called the no-contact principle. In other words, isolation is a strategy of collective preservation, allowing them to maintain their own systems of thought, their cultures, their languages and traditions, as well as to survive the threats caused by any forced contact with the outside world. As such, Article 26 of the American Declaration on the Rights of Indigenous Peoples (2016) enshrines the collective right of Indigenous Peoples in situation of voluntary isolation or initial contact to “remain in this situation and live freely and in agreement with their cultures.” Following the adoption of this Declaration, Armstrong Wiggins, Miskito leader from Nicaragua and Director of the Indian Law Resource Center (Washington D.C. Office), declared, “[n]o Declaration is perfect, but this is an important step in the right direction to protect indigenous peoples. The American Declaration, as a human rights instrument, is a living instrument that will be interpreted in accordance with indigenous peoples’ present-day conditions, in order to better protect their human rights.” What about the right to live in voluntary isolation in the Age of Covid-19 and of an almost-global confinement?

In its resolution No. 1/2020 of 10 April 2020, the Inter-American Commission on Human Rights recalled the need for States to respect, promote, and protect the right to live in voluntary isolation and the principle of no contact. Furthermore, States have the international obligation to respect the right to health of Indigenous peoples; in particular, the United Nations Guidelines for Protection of Indigenous Peoples in Isolation and Initial Contact of the Amazon Region, Gran Chaco and Oriental Region of Paraguay, indicate that States must prevent the transmission of diseases to isolated tribes, through the prohibition or limitation of activities of outsiders within their lands, and must ensure their access and use of traditional biomedicine.

However, the responses provided by States in the Amazon region are extremely variable and, overall, trigger concerning uncertainties with regards to the survival of Indigenous peoples. In Colombia, the governor of Magdalena decided to close the national parks of Tayrona and Sierra Nevada as early as 15 March 2020, with the explicit aim of preventing the spread of the Covid-19 virus to the peoples living in these areas. Nonetheless, other States, such as Brazil, appear reluctant to protect the integrity and ensure the survival of isolated peoples living within their borders. For instance, in an ordinance of 17 March 2020, the National Indian Foundation of Brazil transferred the responsibility to protect isolated peoples to its regional offices, despite the lack of qualified staffs and the insufficiency of structural conditions to assume such task.

Face to this new threat and the carelessness of some governments, Indigenous Peoples who live in territories shared with isolated peoples have mobilized in order to stem the spread of Covid-19, in particular by closing access to their territories, by reactivating "self-defense committees," and by urging the international community to protect the human rights of Indigenous tribes living in the Amazon. In Brazil, in the State of Pará, the Mudurukus living along the Tapajós river have posted signs aimed at preventing foreigners from entering their territory. The International Working Group on Indigenous Peoples Living in Voluntary Isolation or in Initial Contact in the Amazon and Gran Chaco (PIACI IW) has issued several public recommendations, calling for States to intensify surveillance measures of illegal activities in protected territories, to establish adequate health emergency plans which respect the rights of these peoples, or to work in collaboration with the contacted tribes that live in territories shared with other uncontacted tribes. 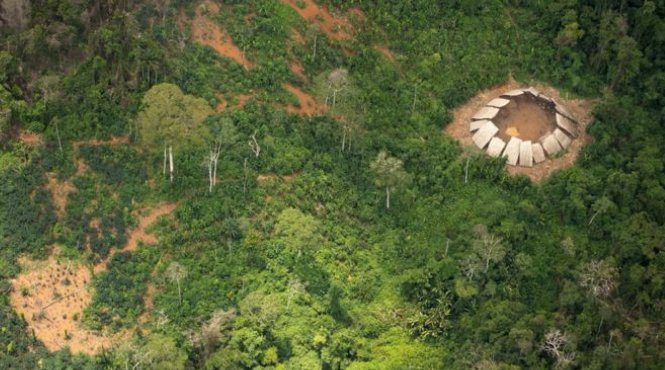 If it is still too early to accurately measure the consequences that the Covid-19 pandemic could have on isolated Indigenous peoples of the Amazon, the scenario of an ethnocidal crisis is taking shape. Once again, the violations of their right to live and remain in isolation threaten their survival. While many States around the world have imposed drastic policies of containment to their entire populations and punitive measures for failure to comply with stay-at-home orders, disrespecting the quarantine of those for whom isolation is a collective right and a choice seems even more contradictory. In both cases, isolation indeed constitutes a collective strategy of preservation facing the current pandemic. The reflections of anthropologist Bruce Albert about these political dissonances shed light on the paradoxes of societies (still) nourished by colonialism and its contemporary avatars: "Homo industrialis lives now, as Claude Lévi-Strauss reminded us in 2004, 'under some sort of internal poisoning regime'. In Saudade do Brasil, he added: 'Having become its own victim, it is the turn of Western civilization to feel threatened.'” As the world is trying to navigate the Covid-19 pandemic and to face the “threat of the unknown,” will this experience lead to a greater awareness about the need to respect the rights to isolation and self-determination hold by the Peoples of the Amazon? Certainly, in the Age of Covid-19, the human rights pandemic cannot be left in the shadow and unaddressed.

*Laura Cahier is currently a PhD Candidate in Law at the University of Aix-Marseille, France and the representative of the Institut des Amériques in Washington, DC (Georgetown University). Her thesis research focuses on the rights of Indigenous women in the Americas and their socio-legal mobilizations to denounce intersectional forms of violence. She is a former intern at UNPO.

Cover: Interactive map showing the presence of Indigenous peoples in voluntary isolation and initial contact in the Amazon region. However, the existence and location of many other isolated Indigenous groups remains to be confirmed, due to their remoteness and isolation. Source: Uncontactedtribes.org