The recent presidential election in Nagorno-Karabakh took place in spite of the outbreak of coronavirus and calls for postponement. Questions about the legitimacy of the election result have been raised, however, after the leading contender for the presidency, Foreign Minster of the de-facto state Masis Mayilyan, encouraged his supporters not to vote due to health concerns and the other candidate, businessman and former PM of Karabakh Arayik Harutyunyan, swept to victory with 87% of the vote, despite an overall voter turnout of just 45%. Moreover, the closed borders meant that international electoral observers were unable to reach Karabakh to observe the election, further diminishing the legitimacy of the election result.

Amid the global and regional turmoil caused by COVID-19, the de-facto Nagorno Karabakh Republic (NKR) had to face not only the pandemic and its economic implications, but also undergo a transition of power, for the first time since Armenia’s 2018 ‘Velvet’ revolution. 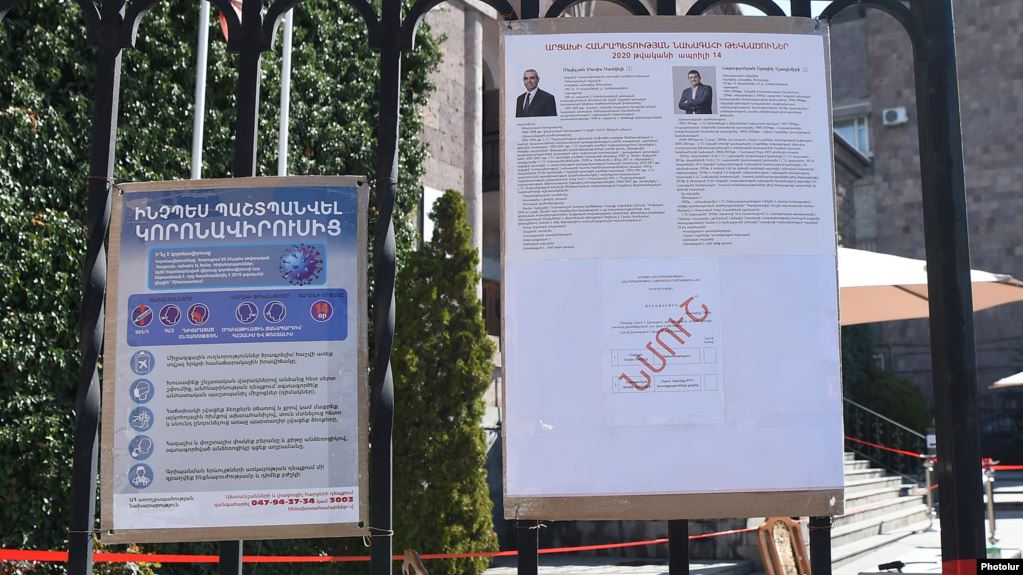 On March 31st, Nagorno Karabakh Republic held elections to form a new parliament and elect a president. While the conduct of these elections can be regarded as highly democratic, as seen in the regional context and in terms of the number and diversity of the candidates, the process did not go as smoothly as planned. Since none of the presidential candidates received more than 50% of the votes in the first round, the Central Election Commission of NKR set April 14th as the second round of the presidential elections. While this was expected (according to many experts and the general public) the situation became sensitive due to the first case of coronavirus infection reported on the 5th of April. Despite the emergency situation and calls from the civil society activists and observers to postpone the elections, nothing seemed to be an obstacle powerful enough to postpone the second round of elections scheduled 9 days after the first confirmed case of COVID-19 in Karabakh. Meanwhile, the Revolutionary Party of Artsakh and the New Artsakh political bloc organized two rallies supporting Masis Mayilyan, although they could not be conducted due to the emergency situation, which was extended until June 11th.

The presidential candidates in the second round were NKR’s former Prime Minister and the richest businessman of the unrecognized republic Arayik Harutyunyan, and the Minister of Foreign Affairs Masis Mayilyan. The latter boycotted the second round of elections and advised his supporters not to participate in voting considering the health concerns. Considering the low likelihood that he could cut the margin and win a majority, this seemed just the perfect excuse in the face of the expected blow.

These calls, as well as the general pandemic situation, truly affected the turnout. As opposed to the first round, when over 72% voters showed up in the polling stations, on April 14th the voter turnout was just below 45%. As a result, Arayik Harutyunyan won the election with 87% of the votes becoming the fourth de facto president of Artsakh (The official name of the entity according to its constitution, as well as the historic name of the region used by Armenians) taking office on May 21st. Masis Mayilyan will return to his position as the Minister of Foreign Affairs, as the two have agreed after the election.

The low turnout rate naturally raised concerns about the legitimacy of the elections which took place in an emergency situation, with a limited number of local observers and lack of internationals as travel restrictions had already come into force practically everywhere.

Even though practices of vote-buying and a number of electoral violations (reported by the Union of Informed Citizens) were recorded, the final outcome can hardly be doubted. As Yerevan-based analyst Hrant Mikayelyan has argues, these elections were certainly organized better and conducted properly compared to the Yerevan mayoral elections in 2017, notwithstanding the electoral violations he has revealed in a statistical analysis. No matter the electoral management process, it is certain that the fears of the virus, as well as restrictions imposed due to it (including the absence of international observers and media), the legitimacy of the elections have been damaged, in circumstances when the majority of the population could not or preferred not to take part in the elections.

Relations Between Yerevan and Stepanakert

Despite the high stakes, involvement from Armenia has been limited. Pashinyan’s administration has relatively distanced itself from NKR’s internal developments and the engagement with the election has been limited to providing grants to the civil society for conducting election observation missions. The distancing concerns not only the elections. After the ‘Velvet’ Revolution of 2018, no drastic transformations took place in NKR, and the incumbent president Bako Sahakyan-- who was closely affiliated with Armenia’s past regime representatives-- remained in office. The regime was opposing Pashinyan through proxies or directly, while Yerevan was turning a blind eye on the excessive propaganda against the elites through the media channels that are still excessively controlled by Armenia’s previous regime. 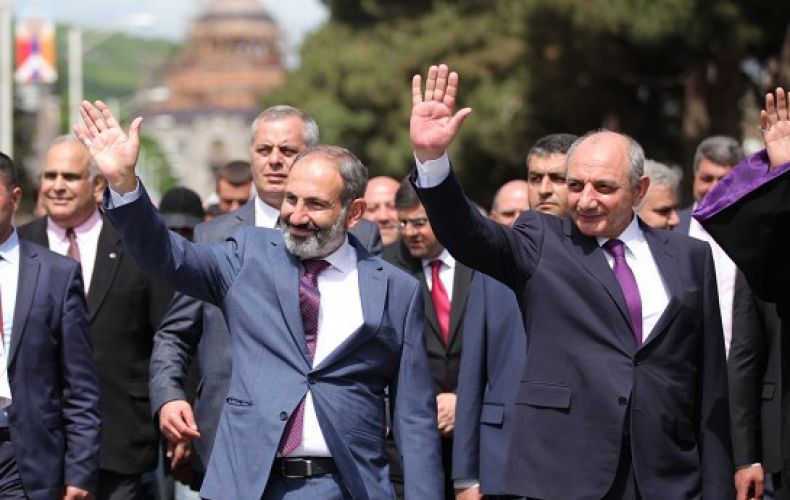 The elections in NKR were a great opportunity to change the situation in NKR, which would not only bring changes and democratization but also alter its international image through the conduction of free and fair elections… which only partially materialized.

Although the results were disappointing, especially in a sense that the newly elected president has a reputation as an oligarch which goes against the logic of the values and anti-corruption efforts of Pashinyan’s government, cooperation with Arayik Harutyunyan will surely pose less obstacles for Yerevan. In fact, Tatul Hakobyan argues that Arayik Harutyunyan was Pashinyan’s and his team’s preferred candidate. He even finds it questionable whether Pashinyan’s public support would help or serve as an obstacle to any of the candidates, considering that since 2018 Pashinyan has been a center of criticism in the media and does not enjoy high popularity in Artsakh. Perception of Pashinyan in NKR has gradually turned more positive after Pashinyan’s frequent visits and speeches in NKR; however, the propaganda still leaves many with a negative perception of the Armenian PM fueled by the past regime who still has sizeable levers of influence in NKR.

Obviously, the Armenian government’s main interest was that power transition will give a chance to the people to elect a leader who is not affiliated with former presidents Serzh Sargyan and Robert Kocharyan, who are the main powers destabilizing the political environment not only in Armenia but also in Karabakh. In this context, they considered that neither Harutyunyan, nor Mayilyan are under the direct control of these men. As a result, Arayik Harutyunyan’s victory is acceptable for Pashinyan and his team, as well as less problematic for the former regimes of Armenia and Artsakh.

In an interview on April 6, Pashinyan said that there has not been a revolution in Artsakh (NKR) but importantly, there also has not been an anti-revolution either. Putting this in the context of the recent elections, according to Pashinyan, show that the ‘anti-revolutionary powers’ have failed in Artsakh. When it comes to the legitimacy of the elections, Pashinyan considers the results an overall achievement for the people of Artsakh despite the fact that they were not fully satisfactory as discussed above. The feedback of the Armenian government has been largely positive which might indicate that Yerevan-Stepanakert relations are getting on a positive track in the future, leaving behind at least some of the former tensions and disagreements.

Implications for the regional conflict

The recent internal developments in NKR-- paired with reactions from Azerbaijan-- raised concerns about how the change of government will impact the regional dynamics, particularly in the context of NK conflict.

The tensions between Pashinyan and the former government of Artsakh did not have a major impact on the negotiation process of the NK conflict; therefore, there is ground to claim that there are few chances that change of government in NKR will have a significant impact on the agenda of the Karabakh peace process. As mentioned, currently there are positive sentiments towards the newly elected president of Artakh, which is likely to ease the cooperation with Armenia in other sectors as well. Yerevan’s interest in conducting legitimate elections in Karabakh was also motivated by its ambition to bring Karabakh back to the negotiation table represented by its elected authorities.

The OSCE Minsk Group as well as the EU, Russia, and others reacted to it after the first round of elections emphasizing that these elections will not have any effect on the status and the recognition of the de facto state.

The Minsk Group also organized a video conference between the Foreign Ministers of Armenia and Azerbaijan on April 21st. Although the talks continue, there is an apparent tension during the past month which includes the elections, a few casualties at the border, use of heavy armaments and comments on reciprocal speeches of foreign ministers regarding the possible options of conflict resolution.

The situation with the pandemic once more highlighted the issues that Artsakh faces, one of the most important ones being the virtual impossibility to host or receive aid from any international organizations, since it is de jure a part or Azerbaijan and therefore, to enter there international organizations would need to get Azerbaijan’s approval. Currently there is only one international organization functioning in NKR - The International Committee of the Red Cross. International assistance is especially vital in the fight against the pandemic, which has been spreading quickly in Armenia since some of the restrictions have been lifted. Although the border between Armenia and NK has been closed for citizens, there might still be chances that the effects of the pandemic can be controlled, but current price increases in certain products and the closing of over 300 small and medium businesses already indicate there will be a need for additional assistance. The pandemic, once again, highlights the recent trend developed by scholars and long-pushed by civil society, who argue that engagement with the unrecognized entities is necessary, while humanitarian assistance and protection of human rights should not be affected by territorial disputes. While the pandemic is having destructive effects in the whole world and in the region this challenge might serve as an opportunity for depoliticized cooperation between Armenia and Azerbaijan in the fight against COVID-19.