In a poll conducted among 1,000 registered voters, 45 percent said they would support giving statehood to Washington D.C., with only 28 percent opposing D.C. Statehood. These outcomes of the poll, which asked voters about their view on statehood for Washington D.C. and Puerto Rico, reflect the growing support for D.C. Statehood as the U.S. House will hold a hearing on the issue later this July.

Below is an article published by The Hill:

More than a third of voters say they believe Washington, D.C., and Puerto Rico should be granted statehood, according to a survey released Wednesday [3 July 2019].

The Hill-HarrisX poll found that a plurality of voters, 36 percent, said both the district and the island territory should be granted U.S. statehood.

Seventeen percent of those surveyed said they don't believe either should be granted the status, while 27 percent voiced uncertainty on the issue.

Almost half of Democrats — 47 percent — said both Washington, D.C., and Puerto Rico should be granted statehood; 37 percent of independent voters said the same.

Republican voters were less enthusiastic about granting statehood. According to the survey, 24 percent of Republican respondents said they believe Puerto Rico and D.C. should be granted statehood, while 26 percent said neither should.

Puerto Ricans are considered natural-born U.S. citizens but cannot vote in presidential elections unless they relocate to one of the 50 states or the District of Columbia. As a territory, Puerto Rico is awarded one nonvoting delegate in Congress.

D.C. residents have long advocated for statehood, arguing they lack full representation in Congress because they don’t have a voting member in the House or Senate. Still, D.C. residents took one step closer toward statehood after the House announced that it plans to hold a hearing on the issue later this month [July 2019].

The movement toward statehood for D.C. and Puerto Rico has been the subject of much debate among lawmakers.

“You’ve surely noticed that they plan to expand the Supreme Court. This is full-bore socialism on the march in the House,” he added.

Sen. Bernie Sanders (I-Vt.) hit back that Trump’s comments make him proud to be a democratic socialist, a label the Democratic presidential candidate has recently embraced on the campaign trail.

“Mitch McConnell thinks that allowing the District of Columbia and Puerto Rico to become states is 'socialism.' Well, that’s another reason why I’m a proud Democratic Socialist,” he tweeted. 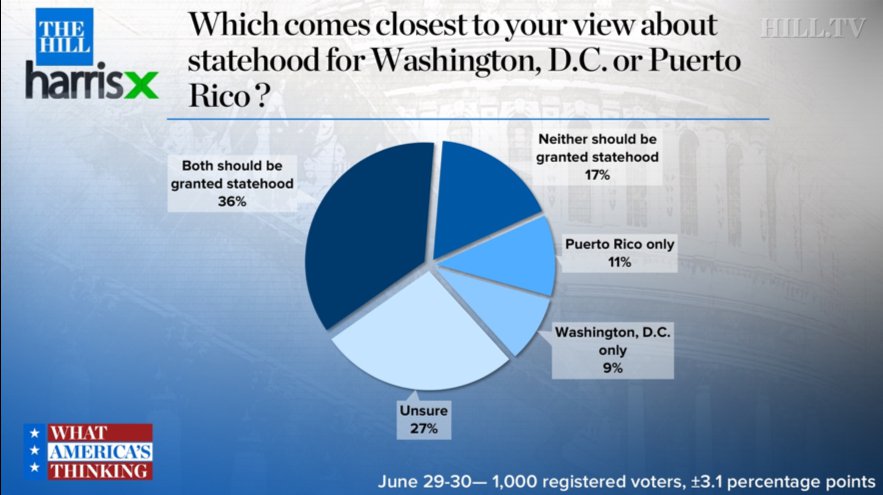 The outcomes of the Hill-HarrisX poll. Source: https://thehill.com/hilltv/what-americas-thinking/451569-poll-36-percent-of-voters-say-dc-puerto-rico-should-be-granted-statehood