As the 5th of July 2019 marks the 10th anniversary of the Urumqi Massacre, during which thousands of Uyghur protesters were killed by Chinese authorities, the World Uyghur Congress is organising worldwide demonstrations on this day, calling upon all Uyghurs around the world to participate. These demonstrations will commemorate the Urumqi massacre, as well as call upon the international community to hold China accountable for its current repressive measures in the Xinjiang province, where it is estimated that more than one million Uyghurs are being detained in internment camps.

Below is a press release issued by UNPO member the World Uyghur Congress (WUC):

Friday, 5 July 2019, marks the 10thanniversary of the Urumqi massacre in East Turkistan. On July 5-7, 2009, thousands of Uyghur protesters were killed, forcibly disappeared or injured in a brutal response from the Chinese government to peaceful protests from mostly Uyghur students in Urumqi in response to China’s policies in the region. The massacre proved to be a major turning point direction in the strategy of the Chinese government towards East Turkistan to one of outright violence and oppression and a complete lack of tolerance or willingness to listen to the voices and concerns of the Uyghur people. The effects of this atrocity have remained with the Uyghur people, as hundreds of students and protestors disappeared into Chinese custody, never to be heard from again. In the 10 years since the massacre, the situation of the Uyghur people in East Turkistan has deteriorated incredibly, as over 1 million innocent Uyghurs have been detained in internment camps and the Chinese government is striving to completely erode the Uyghur identity.

The peaceful protest in 2009 began with several thousand Uyghurs — mostly students marching towards the People’s square in central Urumqi at around 5:00 pm on July 5. They expressed their anger at the Chinese government’s handling of the Guangdong Shaoguan incident in which two Uyghurs were killed by Chinese factory workers in a dispute. Hundreds of Chinese police with shields, rifles, and clubs were already in position and moved to disperse and arrest the protesters before they reached the People’s Square, indicating that the government had full knowledge of the protest beforehand and was well prepared to suppress it.

The regional government quickly instituted a communications blackout that lasted for months following the incidents that prevented the flow of information in and out of the area through the complete restriction on the internet and mobile phone use. These tactics have since been used frequently in an attempt to tightly control who is able to gain access to information, amid a general lack of access to independent media that persists year-round.

Reports from Amnesty International and the Uyghur Human Rights Project, who both conducted interviews with eyewitnesses to the events, concluded that the security forces made liberal use of live ammunition during the unrest. Along with those that were killed and injured in the incident, a considerable number of arrests were also made shortly afterward. In a report released by Human Rights Watch, it was estimated that there were 43 verifiable cases of enforced disappearances of Uyghur prisoners arrested in the aftermath – a number that is likely much higher in reality. However, the Chinese government was never subjected to any punitive action by the international states nor subjected to any independent investigation into this atrocity. The lack of justice and accountability has enabled the Chinese government to

“The Chinese government was never held fully accountable by the international community for this terrible atrocity in 2009.” said WUC President Dolkun Isa. “The failure to act emboldened the Chinese government to pursue even more repressive measures, now resulting in the internment of millions of innocent people in camps. The international community must learn from this and finally hold China accountable for its crimes against humanity.”

The Urumqi massacre also demonstrated the Chinese government’s complete intolerance and disregard for the voice and concerns of the Uyghur people. Any attempts to communicate concerns about China’s repressive policies and human rights violations have been met with violent and brutal responses. The basic rights to freedom of expression and freedom of assembly have been completely denied to the Uyghur people. The Uyghur diaspora has looked on with hope and admiration for the brave protestors in Hong Kong standing up for their rights and freedoms, as such a protest would be impossible in East Turkistan. The Urumqi massacre and the current situation in East Turkistan should stand as an example of what is at risk if the Chinese government manages to pass the extradition bill and deprive Hong Kongers of their rights and freedoms.

The right to freedom of assembly and the ability to peacefully voice your concerns to authorities is a key part of any heathy and free society. In remembrance of the all those who were killed, disappeared or injured exercising this basic right in Urumqi on 5-7 July 2009 and of the Uyghur people in East Turkistan are completely denied this right, Uyghurs around the world will demonstrate on 5 July 2019. Protests will be held in 22 cities in 14 countries around the world as the Uyghur community remembers of the victims of the massacre and calls on the international community to finally hold China accountable for its actions. As Uyghurs in East Turkistan have been deprived of their voice by the Chinese government, those of us living outside of the rule of the CCP must loudly raise ours on their behalf. We encourage anyone interested to support the Uyghur people by joining a demonstration in a city near you. The full list of participating cities and times of the protests is listed below: 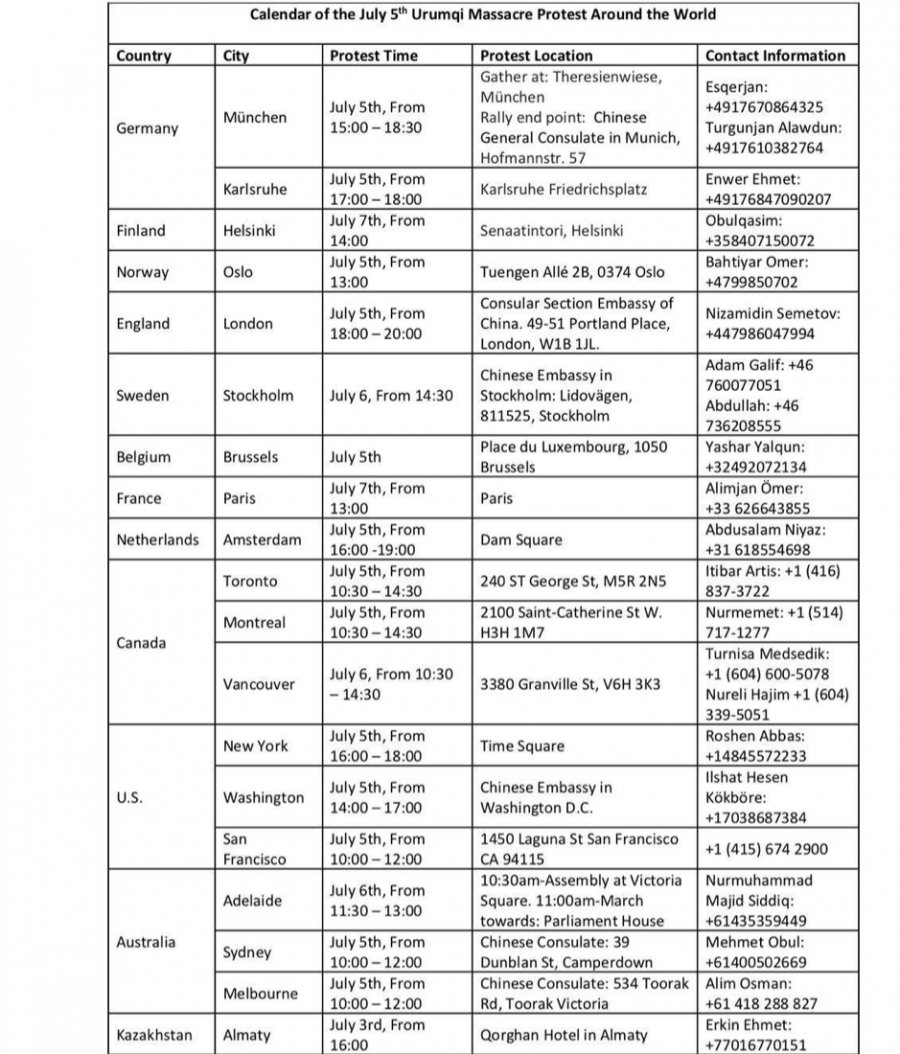