UNPO Concerned About Impacts of EU-Vietnam FTA on Human Rights

Expected to be ratified late 2018 or early 2019, the European Union (EU)-Vietnam Free Trade Agreement (EVTFA) aims at increasing bilateral trade and investments between both parties. Despite positive economic expectations, nongovernmental organisations (NGOs) have raised severe concerns regarding the weak inclusion of human rights principles and sustainable development pillars within the agreement. On 18 September 2018, at a seminar about EVFTA in Brussels, Belgium, at the initiative of the European Institute for Asian Studies (EIAS), several members of the audience seized the opportunity to shed light on the controversial and adverse impacts of this trade deal for human rights.

On 18 September 2018, a seminar about the EVFTA was organised by the EIAS in Brussels, three years after the first talks regarding trade facilitation and non-tariff barriers between the EU and Vietnam started. Moderated by Olivier Arifon, senior associate at EIAS, debates mostly focussed on the business-related benefits of such a trade agreement. 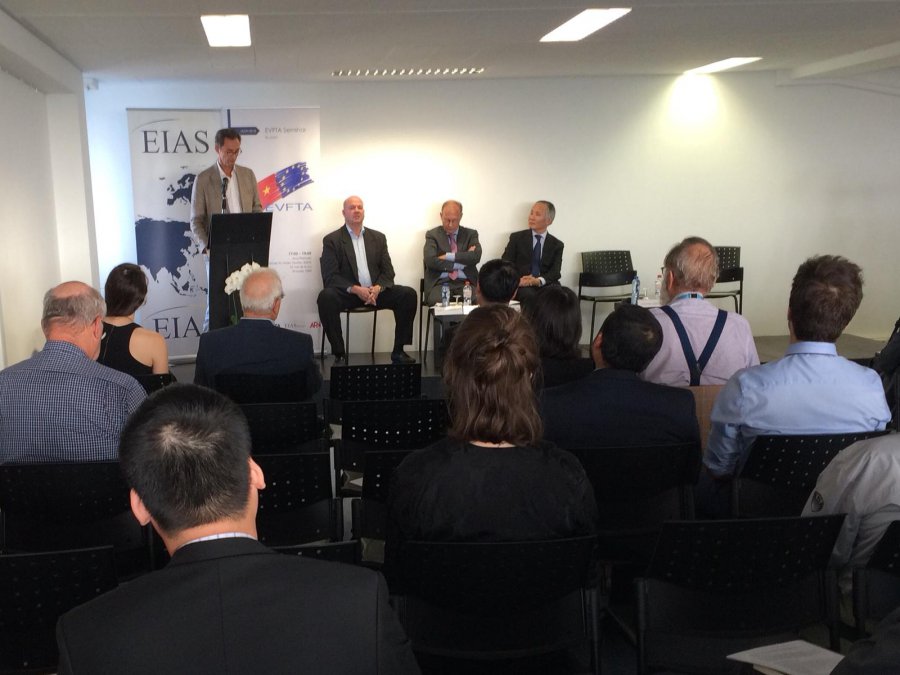 In his welcome address, Alex Goethals, Chief Executive Officer (CEO) of the EIAS, stressed the positive effects that the EVFTA could have on economic growth and investments. With the reinforcement of diplomatic relations between the EU and Vietnam since the 1990s, bilateral trade and Foreign Direct Investments (FDIs) have been considerably amplifying. The EU today ranks as Vietnam’s second most important two-way trading partner, right after China. Vietnam’s exports of commodities towards the EU reaches one fifth of its total exports to the global market and the EU is the fifth bigger investor in the country.

In this context, the EVTFA was envisioned as a stepping stone for strengthening and expanding economic and financial links between the EU and Vietnam. While eliminating 99% of customs duties on exported and imported goods and drastically reducing non-tariff barriers, this agreement is now referred by the European Commission as “the most ambitious deal of its type ever concluded between the EU and a developing country”.[1] After the European Court of Justice stated in a 2017 ruling that some of EVTFA clauses are “mixed competencies” between the EU and its member states, the agreement is now expected to be ratified late 2018 or early 2019.

In his opening words to the seminar’s participants, H. E. Mr Vu Anh Quang, Ambassador of Vietnam to the Kingdom of Belgium, emphasised the positive effects of enhancing free trade, for both European and Vietnamese economic growth. Figures issued by the European Commission’s Department for Trade (DG Trade) show that Vietnam’s gross domestic product (GDP) could increase by 15% following the adoption of this agreement. Four years after the adoption of the EU-Singapore FTA in 2014, Peter Berz, DG Trade’s Head of Unit, explained to the audience that the deal should be considered as an important step towards the enlargement of economic cooperation between Europe and South East Asia and the further creation of a regional FTA.

However, should the EU strengthen trade links with South East Asia at the expense of its human rights commitment? Hidden behind the economic façade, important ethical and political challenges are raised by the EVTFA. The UNPO and fellow NGOs are particularly concerned by the controversial and partial neglect of EU’s commitment to sustainable development and human rights. Indeed, as a result of the EVTFA, the most vulnerable sectors of Vietnamese society might suffer from the competition with EU-produced goods:  while Vietnamese workers are not allowed to form independent unions under national law, economic competitivity is very likely to lead to the deterioration of working conditions and the decline of salaries. More broadly speaking, cooperation with Vietnam should be evaluated in the light of other criteria than economic benefits. In particular, Vietnam’s human rights record remains extremely dire in every domain: the monopoly of the Communist Party over politics threatens basic freedoms such as that of speech, press or religion; human right defenders, bloggers and journalists face physical assaults, harassment, threats; minorities such as the Khmer-Krom suffer repression and marginalisation.

While the EIAS presents the EVFTA as containing “robust, comprehensive and binding commitments” to protect human rights and sustainable development principles, UNPO expresses concerns about the poor and inadequate scope of these legal requirements. The 2012 Partnership and Cooperation Agreement (PCA) between both parties contains legal provisions that could be invoked in order to suspend the EVFTA in case of human right abuses; however, some lawyers have denounced the fact that PCA provisions are too vague to be legally effective and binding. While the impact assessment recommended by the European Parliament has not been issued so far, the binding commitments in terms of inclusion and protection of human rights standards and sustainable development in the framework of the EVTFA remains unclear. H. E. Mr Tran Quôc Khanh, Deputy Minister of Trade and Industry of Vietnam and Negotiator of the EVTFA, underlined during the above-mentioned event that a new session of the EU-Vietnam Human Rights Dialogue will convene in December 2018, protection mechanism which does not include any binding commitment from any of the parties.

In spite of the economic benefits which could be driven by the EVFTA, the reinforcement of the economic and financial ties between Vietnam and the EU remains concerning when it occurs at the expense of human rights and sustainable development. While the EU’s political credibility and commitment to human rights are at stake, the UNPO calls out European decision-makers, and Members of the European Parliament, who will be called to vote on this agreement very soon, in particular, to ensure that all agreements include legal safeguards for individuals and groups, particularly those most vulnerable such as indigenous peoples and minorities.